All three brothers are actors and they admit to there always being competition growing up in everything they did. Chris and Liam have both made it big in Hollywood and, although there are reports of sibling rivalry, Chris and Liam Hemsworth apparently use it to their advantage as much as possible. Liam has said that there is inevitably competition between them as they end up fighting for the same acting jobs (i.e. they were both in the running to play Thor in what has become one of Chris’s career-launching roles). “We are brothers and we are always competitive, but it is a good thing, it pushes us and we are always happy whenever someone books something.”

The Hemsworth brothers hail from Australia so they have the distinctive tone of fellas from the land down under. Unfortunately, they regularly have to adopt other accents for their roles (or fortunately when it’s something yummy like a Scottish brogue). Apparently learning to speak with an American accent hasn’t been easy for Liam, but he seems to be getting by. “It’s not easy. I did a film just before I came to America, in an American accent. So I’ve worked with an accent coach before, and I worked with an accent coach on ‘The Last Song’ as well. I do a lot of work with it.” But it’s not only American accents they have to tackle. Chris had to mimic a Scottish accent in Snow White and the Huntsman, where he said that he and co-star Kristen Stewart would sometimes accidentally switch accents.

You have to be pretty mighty to play a god and Chris Hemsworth lives up to the role even as a mere mortal. But Chris wasn’t the only Hemsworth who was considered for the superhero role. Director Kenneth Branagh contacted Liam Hemsworth to test for the part of Thor and the young actor picked up and moved to the US just for the screen tests. He ended up losing out on the role to big brother Chris but it’s not hard to see why both brothers were up for the lightning-bolt throwing part. Can you see Liam as Thor? Or was Chris the better choice? Either way, audiences ended up with a demi-god they could drool over.

Liam Hemsworth may have lost out on the role of Thor to big brother Chris Hemsworth, but he landed a prime part as Gale Hawthorne in The Hunger Games movie, alongside beloved fellow young star Jennifer Lawrence. He continued his role through the three sequels and fans continued to crush on him harder and harder. It’s reported that the part didn’t bring Liam the kind of super-fame he was hoping for, but it certainly didn’t hurt his standing as one of Hollywood’s hottest.

Who you gonna call? Chris Hemsworth! For real, if you were to be transported into the haunted world of the new Ghostbusters movie and wanted to contact the ghoul-fighting group, it would be Chris Hemsworth answering the phone. Or, at least it would be his character. His role as the new lady Ghostbusters receptionist might have fans worried he’ll be tucked away behind a desk, but fear not, pics released from the set show him in the Ghostbuster uniform ready for action.

The movie-watching world was wide-eyed and jaw-dropped when pics (and a fun clip) were released of Chris Hemsworth on the set of the new Vacation movie. And that’s not a surprise when you get a look at what he’s flaunting in his boxer-briefs. Sporting a rather wild prosthetic piece to enhance his own…um…area…Chris was apparently a little shy about the semi-nude, prosthetic phallus packing scene, but he soldiered ahead and fans are thrilled that he did. “We went bold, ya know—big and bold.”

4. Stars on the Rise

Back in 2010, Liam Hemsworth appeared in Details magazine’s list of “The Next Generation of Hollywood’s Leading Men” and it looks like they were right. He, along with his brother Chris Hemsworth, have done well to prove that they both have what it takes to be leading men in Hollywood. From blockbuster films to pleasing fans and audiences around the world, the Hemsworth siblings are definitely stars on the rise.

3. Charlie (or Liam) Bit My Finger

If you thought it was cute when Charlie bit his older brother’s finger, imagine how much you’ll love it when the Hemsworth siblings continue the story as the grown-up duo. We know they are good looking and can act, but both have a great sense of humor and can pull of comedy, which just makes them that much better. “Chris and Liam Hemsworth have starred in a parody movie where they re-enact ‘Charlie Bit My Finger’ also starring Meryl Streep and Tom Hanks as their parents. The movie is about Charlie and his brother when they’re older and the older brother wanting revenge.” Crush hard while laughing hard!

2. We Love That They Love Love

The Hemsworth brothers are no strangers to romance and fans love ‘em for it. Older brother Chris Hemsworth is married to actress Elsa Pataky (you may remember her as the super-blazing Latina police officer in the Fast and the Furious movies who teams up with Dwayne Johnson and hooks-up with Vin Diesel’s character). Little brother Liam famously had an on-again, off-again relationship with his The Last Song co-star Miley Cyrus. The two lived together and were even engaged, but things cooled off in September of 2013 and Hemsworth has said that the two will “always be best friends.”

Those eyes, those jaw-lines, those bodies…oh my! The Hemsworths are almost too hot to handle…and there are two of them. Woohoo! Chris was named as the 2014 Sexiest Man Alive by People Magazine, which seems like a no-brainer. Surely brother Liam should have been number two on the list. Perhaps next year! 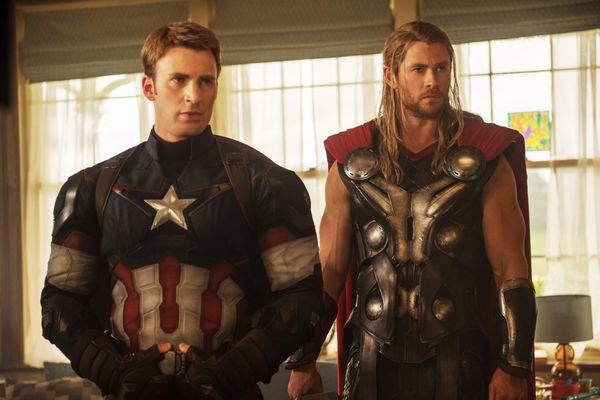