10 Reasons Mila And Ashton Are The Perfect Couple

Mila Kunis and Ashton Kutcher seem to be the perfect couple with star-powered careers, a beautiful new baby, and a recent private weekend-long wedding. There are plenty of reasons why the pair is so popular, but one of them is that it’s hard not to envy their luxurious and loving lives. “They’re so happy. They’re so in love.” *blissful (totally-not-jealous-cough-cough) sigh*

Everyone loves a sweet story about how a couple met. In showbiz, they call it a “meet cute” and Mila and Ashton can certainly make a claim for their own “meet cute.” Fans were first introduced to Mila Kunis and Ashton Kutcher back in 1998 when they starred as Jackie Burkhart and Michael Kelso in That 70’s Show. Even then they were paired as a fictional couple, it was hard not to adore the young duo.

A girl’s first kiss is a massive moment in her life. Imagine having to do it on camera with a former model? That’s just what happened to Mila Kunis when she had her first kiss EVER with co-star and future hubby Ashton Kutcher in an early episode of That 70’s Show. “I was like, ‘Oh, he’s so cute, it’s the Calvin Klein model!'” the actress told PEOPLE in 2001. “Then I was like, ‘I have to kiss him?’ I was so nervous and uncomfortable. I had the biggest crush on him.” This was apparently news to Ashton who had no idea. “I’m the first guy she kissed? Oh my god, I had no idea!” said Kutcher, also in 2001. “I’m so glad I didn’t know that or it would’ve been too much pressure.” Added Kutcher, “I was so nervous. She acted so cool. She seemed as if she’d done it a thousand times. I was the one with the butterflies in my stomach.” A-dor-a-ble!

Mila Kunis and Ashton Kutcher have been friends for years, all the way back to their co-starring days on That 70’s Show. These days, as a couple and co-parents, they seem to be just as good of friends as ever. Whether strolling around town in matching outfits or being spotted at a basketball game together, they appear to genuinely enjoy each other’s company as much as fans enjoy watching their romance and friendship.

Mila and Ashton welcomed their daughter, Wyatt Isabelle, into the world in October of 2014. Both are reportedly over-the-moon about the birth and absolutely in love with their little one. Keeping their baby girl out of the spotlight seems to be a priority for them both; however, she was a highlight at their recent wedding, wearing a lovely little white dress to celebrate her parents’ marriage.

6. Public AND Private With the Perfect Balance

Ashton Kutcher and Mila Kunis have mastered the art of balancing their personal and private lives. Regularly appearing in public together to give the media and fans a peek at the pair when they’re cool with it, they also manage to keep their private lives private. Keeping their baby daughter Wyatt out of the spotlight is just one of the ways they protect their home-life. They also made sure that their wedding was a relaxed weekend with friends and family. For their honeymoon, the couple is off on an RV trip in Yosemite National Park. High profile when they wanna be; private when they need to be. The best of both worlds.

Couples that laugh together stay together and considering both Mila and Ashton have proven their comedy chops, fans can just imagine how many laughs happen when these two get going. Even posting a sign at their wedding that read “Camp Kuku,” the cheeky twist on their combined last names shows that they take a fun spin on their loving romance.

4. A Pair of Rising Stars

That 70’s Show was just the beginning for Mila Kunis and Ashton Kutcher. From there, Aston went on to star in movies including Jobs (the Steve Jobs movie), No Strings Attached and, of course, Dude, Where’s My Car. He also took over the top spot on the hit series Two and a Half Men when Charlie Sheen left the show. Mila has also tackled the big screen with roles in Black Swan, Friends With Benefits and Forgetting Sarah Marshall, as well being the voice of Meg Griffin (and others) on the popular animated series Family Guy.

They’re both hot. Super-hot. Super-sizzling-flaming-burning-scorching hot. For real. Ashton is a former Calvin Klein model and is regularly voted one of the hottest hunks in Hollywood. Mila is well-known for her striking eyes and beyond-beautiful flowing brown hair. One can only imagine how gorgeous their little Wyatt will grow up to be.

Whether they’re walking down the street holding hands or sitting together on a basketball court, Mila and Ashton are rarely spotted without some sort of affection on display. Often photographed with his arms around his lady and the two sharing kisses when the mood strikes, Mila Kunis and Ashton Kutcher seem to be genuinely and adorably in love. 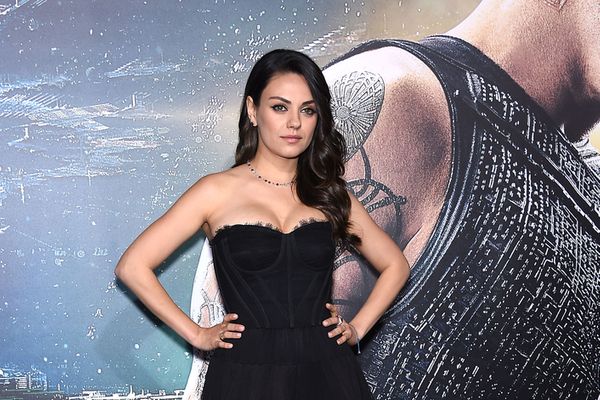