10 Reasons Why Justin Bieber is an Entitled Brat!

When it comes to Justin Bieber, people are pretty divided: You either love him or you hate him. Some people think he acts like he is entitled, while other people are completely indifferent to his behavior. Over the years, the Biebs has exhibited some pretty questionable behavior, which has sparked outrage in millions of people all over the world.

Here are 10 reasons why Justin Bieber is an entitled brat (in our opinion, of course) – with videos to prove every point:

10. When Justin Bieber was invited into the Chicago Blackhawks dressing room, he proceeded to stand in the middle of the team’s logo. Despite being an avid hockey fan, Justin insists he wasn’t aware that this is a huge sign of disrespect…

9. Justin Bieber was privileged enough to meet Canadian Prime Minister Stephen Harper. The popular singer didn’t feel the need to dress up for such an event – he wore a t-shirt, striped overalls and a backwards baseball cap.

8. During a trip to Brazil recently, Justin decided to spend his time at a brothel instead of exploring the country. He was also kicked out of his hotel after he allegedly destroyed the room and tried to bring back two of the area’s most well known prostitutes.

7. Justin Bieber likes to drive his Ferrari around his neighbourhood. Fast. Residents in his gated community in Calabasas complained to the police that Bieber ignores speed limits, homeowner association laws and all of the other rules in a gated community. Bieber has also subjected his neighbors to loud parties, throngs of paparazzi and news helicopters.

6. During a trip to Australia, JB showed off his love for art by spraying graffiti all over the walls of a hotel. He drew a Pac-Man ghost and other florescent cartoon characters. The incident even got the attention of the mayor, who issued a statement to the audacious singer via TMZ. His message? “We love your music but we hate your graffiti and your vandalism here in our city.”

5. There is a video from a show in Argentina that shows Justin Bieber using the microphone stand to push the country’s flag off the stage. Needless to say, fans were not impressed. At all.

4. While in Toronto, Canada, Justin Bieber allegedly spat on a group of adoring fans. A representative for Bieber said he did no such thing. “Justin bought his fans hot chocolate and played them some of his new music. Justin loves his fans.”

3. After leaving a club one late night, Justin Bieber urinated in a mop bucket in the restaurant kitchen. He also screamed “F**k Bill Clinton” and sprayed a photo of the former president with cleaning fluid. You can see it happen in the video below…

2. When Justin Bieber visited the Great Wall of China, he had his bodyguards carry him up on their shoulders. We guess he could have been really tired from staying up late the night before…

1. When Justin Bieber visited the Anne Frank Museum in Holland, he left a message in the guest book that was rather telling. “Truly inspiring to be able to come here. Anne was a great girl. Hopefully she would have been a belieber.” To us, it sounds a bit self-involved. What do you think? 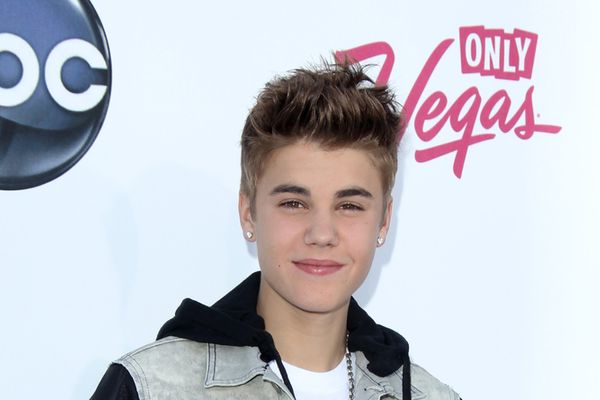