Weddings are super fun, but they can also be extremely stressful, especially for the bride and groom! It’s natural for every couple to want their wedding to be perfect, but sometimes life gets in the way. Even though some celebrities might seem like they have the picture perfect life, they definitely aren’t immune to unforeseen mishaps — especially on their wedding day. Here are 10 of the most shocking celebrity wedding day mishaps!

Former Disney star Hilary Duff first dished out details about her wedding to ex-husband Mike Comrie while on The Ellen DeGeneres Show in 2010 when she shared that her tooth fell out on the morning of her wedding after chomping down on a bagel. Luckily her wedding planner, Mindy Weiss, was able to find a dentist who could repair her tooth before the ceremony, but then a disaster hit again when tons of paparazzi bombarded their outdoor ceremony in helicopters. Her pastor came to the rescue when he “steps out from underneath the little flowered arbor thing, and holds up like a fake Uzi or like a big gun…and starts [pretending to blast] the paparazzi right in front of our guests!” she said in an interview with Chelsea Handler. While she’s able to laugh about it now, it was definitely not funny at the time!

Chrissy Teigen and John Legend’s Lake Como wedding seemed like it was the perfect day, but according to Teigen, it wasn’t all smooth sailing. There was a huge storm in Ohio which delayed the majority of Legend’s family and in return delayed the wedding by four hours. Luckily, they had lots of drinks flowing to keep their waiting guests happy.

Freddie Prinze Jr. and Sarah Michelle Gellar are one of the cutest couples in Hollywood! The pair met on the set of the 1997 film I Know What You Did Last Summer and were married in 2002. They originally planned their wedding to be an outdoor event in Mexico, but mother nature had other plans. On the day of their wedding, a hurricane rolled in which moved them indoors. The next day when guests were on their way home, a 4.6 magnitude earthquake struck! Talk about bad luck! “Earthquake? Hurricane? Hey, I think it’s a great way to start,” said a longtime friend of the Prinze family to People. “All of those bigger-than-life natural events can only bode well for the marriage.”

7. Mark Ballas and BC Jean

Dancing with the Stars pro Mark Ballas’ wedding to BC Jean looked absolutely magical, and while it is surely still their favorite day of all time, it wasn’t perfect. In an interview with People, Ballas revealed that the bride walked down the aisle to the wrong song! “She walked down the aisle to ‘Bohemian Rhapsody’ by Queen, which is one of my all-time favorites,” said Ballas. Here’s the hitch: “It was funny, because they played the wrong version — they were meant to play the symphonic string version, but they played the real version. So all of a sudden she turns the corner and we hear: ‘Is this [the real life]?’ Freddie [Mercury]’s voice is booming through my ceremony! I turned to Derek at the time, my best friend, I was like, ‘They’re playing the wrong version!’ He goes, ‘Relax, man. You love Queen.’ I was like, ‘I do love Queen.'”

Fashion is a big part of Blake Lively’s life which is why it was heartbreaking to her when she ruined her dress on her wedding day. In an interview with Vogue, Lively revealed that her wedding dress almost caught on fire during their reception because of a sparkler! They were enjoying a beautiful performance by Florence Welch when she looked down at the front of her dress and saw a huge burn mark. “It was so heartbreaking to me. And later, my dress was hanging up and Ryan said, ‘Isn’t that beautiful?’ I said, ‘What?’ And he pointed to the burn. My heart just stopped, because it was such a sensitive little subject. And he said, ‘You’ll always remember that moment with Florence singing and the sparklers. You have that forever, right there, preserved,'” she recalled. At least that story has a happy ending!

The road to the altar for former Hills star Kristen Cavallari and NFL player Jay Cutler was rocky from the start. Cavallari pulled the plug on their relationship during their first engagement only a few months after he popped the question, but the two reconciled thanks to therapy. Then after months of planning the perfect wedding, on the morning of their special day, Kristin’s family dog bit her while she was playing on the floor with the kids and the dog. When she looked in the mirror she realized her eye was swollen and bleeding! Luckily her make up artist was able to glue the wound shut long enough to get through the rest of the day!

DWTS pro Kym Johnson wore the most beautiful dress on the day of her wedding to Robert Herjavec until it caught fire! “We smelled something and we thought, is someone having a barbecue?” said Herjavec to People. “Then we realized that Kym’s dress was on fire!” While candles are a romantic addition to decor for a wedding, they can be dangerous! According to Johnson, she’d accidentally passed over a candle on her way to the altar. “I almost went up in flames! Thank God my man of honor stomped it out with his foot. But underneath my dress is completely singed,” she said.

Jessica Simpson tied the knot with Eric Johnson in July 2014. It’s got to be nerve-wracking standing up in front of friends and family and reciting vows back and forth, so we’re not surprised Simpson accidentally flubbed hers! According to E!, Johnson said his vows first and got so choked up he had to start over and then when it came turn for Simpson to say hers, she ended up saying her own name instead of Eric! Of course, they both just laughed it off and started over again.

It was a rocky, or should we say muddy, road to the altar for Pretty Little Liars actress Troian Bellisario and Suits actor Patrick J. Adams. The two exchanged vows in December 2016 in a rustic, bohemian, camp-style wedding weekend in Southern California. Ahead of the ceremony, Adams was responsible for driving all the guests to the venue in a converted bus that said “Almost Married” on the back. However, at one point he and the bus got stuck and he had to get a bunch of his guests to help push him out! Hopefully, no one got splattered with mud!

Former Hills star Audrina Patridge blogged the details of her wedding and didn’t leave any dramatic detail out — including her biggest wedding day mishap! The reality star admitted to being extremely nervous on her wedding day and things were made even worse when as she was walking down towards her future husband with her dad in tow and her veil began snagging on wooden posts lining the aisle! She wrote: “I was fighting back tears as we made our way closer to Corey, but as this was happening I could feel my train and veil catching on the wooden poles that lined the aisle, causing it to pull my head back. I kept moving forward with a smile on my face until it came off!!! I continued walking until some very generous friends ran up behind me to secure it back on my head. LOL — sometimes you have to roll with the punches!” 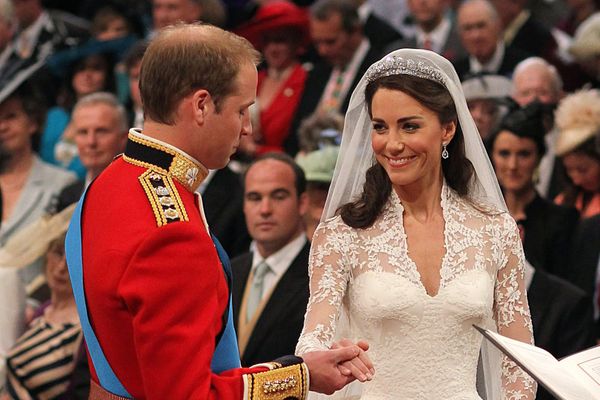