The first episode of Beverly Hills, 90210 aired over 25 years ago and it went off the air in 2000. Somehow people are still talking about the show, reminiscing about its glory days. Beverly Hills, 90210 is firmly entrenched in pop culture history thanks to the storylines, the characters, their hairstyles and fashions, and their various relationships. The show was so influential that it even spawned a spin-off 90210, but that wasn’t enough to satisfy everyone’s appetite for all things Beverly Hills. We’re still missing the original, which is why we have made a list of the 10 things that we miss most about the series!

Over the years, the hairstyles on Beverly Hills, 90210 really changed. Kelly went from having long hair and wispy bangs to a cute bob and then a short shag. Brenda’s thick blunt bangs became her trademark and Donna’s went from long to short and from blond to brown. These ladies definitely influenced ‘90s hairstyles. The one thing we don’t miss – Steve’s mullet.

Beverly Hills, 90210 was full of drama. The characters were always dealing with something whether it was betrayal, a pregnancy scare, alcoholism, drug abuse or domestic violence. Every week brought a new issue, which usually resulted in some expected or unexpected crises.

The Peach Pit was the hangout for Beverly Hills High School students. Brandon worked there and so did Steve. Once everyone went to college, they started hanging out next door to The Peach Pit at The Peach Pit After Dark. Some pretty big musical acts played there, including The Flaming Lips, The Cardigans, and Christina Aguilera.

We miss being able to live vicariously through these Beverly Hills high school students. Their lives were so much more glamorous, with their mansions, luxury cars and designer clothes.

5. Dylan’s Too Cool For School Attitude

Dylan McKay was a lot like a young James Dean – young, handsome and totally rebellious. Trouble seemed to follow Dylan wherever he went and the ladies didn’t care. They loved his nonconformist attitude and his constant brooding.

Brenda and Dylan had a pretty intense romance. He seemed to bring out her wild and rebellious side. When she was in Paris, he hooked up with her best friend Kelly, who he ended up falling for. Even though things didn’t work out between Brenda and Dylan, there is no denying that they had great chemistry.

One of the best things about Beverly Hills, 90210 were the friendships. Everyone didn’t always get along and there were some pretty epic betrayals (we’re looking at you Kelly); however, we still miss watching them fight and then make up.

Beverly Hills, 90210 is like a time capsule for ‘90s fashion. Most of the stuff that the characters wore on the show is completely dated now but, at the time, most of it was considered fashionable. One of the most offensive trends at the time were the mom jeans and all of the characters seemed to have like 10 pairs. 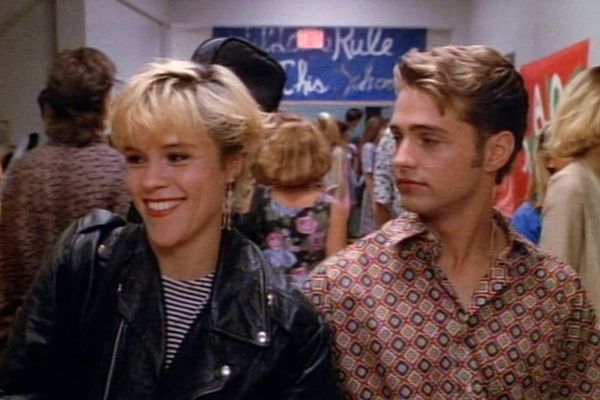