By now quite a few Nicholas Sparks novels have been adapted into huge money-making films, and one of the most successful and beloved has been 2002’s A Walk to Remember. Despite the time that has passed since its release, it remains an iconic romantic film and is continuously watched and re-watched by fans all these years later. On the movie’s 15th anniversary, the cast and crew once again opened up about their time working on the film and remaining close, so take a look back on the fantastic movie with these things you might not know about A Walk to Remember.

It isn’t often that directors cast two relatively unknown stars for the lead roles, but in this case director Adam Shankman knew exactly what he was looking for and exactly what he was doing when he expertly cast Shane West and Mandy Moore. “I wanted young actors with whom teenagers could connect,” he explained and immediately wanted to meet with West after seeing him in a magazine. He said he wanted someone who could go from “very dark” to “very light” and had “an instinct” about the actor. West said although he didn’t “generally read love stories” he became attracted to the story and the character of Landon. As for casting Moore, Shankman said, “she has the voice and the face of an angel,” and Moore who had received the book from her mother years before was instantly interested in the role. West had only had two auditions, the second being with Moore, and they knew right away they had their leads.

The heartbreaking story was enough to pull at audience’s heartstrings and emotions, but what makes it even more tragic is the inspiration for the novel was Nicholas Sparks’ own sister Danielle Sparks Lewis. Danielle died in 2000 from cancer and Sparks has said, “In many ways, Jamie Sullivan was my youngest sister.” The plot was inspired by Danielle’s life as she had met a man who wanted to marry her “even when he knew she was sick, even when he knew she might not make it,” Sparks explained.

Coming into the starring role of Jamie Sullivan, Mandy Moore had previously only acted in one other project: 2001’s The Princess Diaries, making A Walk to Remember her first major role. Prior to her casting, Jessica Simpson was considered for the role, but it was Moore who was the perfect fit. Due to being a minor at the time of filming it meant that Moore was only legally allowed to film for 10 hours per day and was required to complete 15 hours of tutoring each week.

Now, many are well aware of the band Switchfoot and their music was a huge part of the film, but at the time they weren’t that big yet and were involved thanks to Mandy Moore. At the time they were only known to those in the San Diego area and Contemporary Christian music fans, so she encouraged the music department to go after them for much of the movie’s music. When they were asked, however, they had no idea who Mandy Moore was even though she had a successful career as a pop artist up to that point. They ended up contributing four tracks and Switchfoot’s Jon Foreman recorded “Someday We’ll Know” with Mandy Moore.

During the filming of A Walk to Remember, Moore was only 16 and West was 23, and Moore admitted years later it was hard really not to fall for the actor during that time. He was the oldest guy she had kissed and he was also her first onscreen kiss, and being so young on her first movie set with an attractive actor, a  part of her did fall for him. “Shane was so cool. Everything about him — the way he dressed, the little cigarettes he smoked, and the music he listened to. He was the character to me and there was definitely a part of me that absolutely fell in love with him. I don’t know if I could discern the difference between him and the character at that point in time because, again, it was my first experience doing anything like this and I was a 16-year-old, impressionable girl,” Moore said in 2017.

Although Mandy Moore and Shane West had some “misconceptions” about each other before starting the film, they became fast friends and West actually offered Moore some of the best advice she needed at the time. “I gave her advice about keeping her sanity when I started seeing her schedule, when she started showing me her schedule of things she had to do. I was like, ‘No offense to John or whoever is your manager, say no. Say no to something. You’re so young. Take care of yourself, I know you’re young and you can get away with a lot of things – you have more energy,” West recalled of his advice. While on the set of A Walk to Remember, West also taught Moore a lot of blocking when it comes to filming, and in return, he said if the ever needed advice if his band went on tour he would turn to her first.

Despite Mandy Moore’s limited filming time, they had the entire movie filmed at a record pace, wrapping up after only 39 days! Along with time restraints on Moore’s 10 hour days, they ran into another bit of a problem when Daryl Hannah who portrayed Landon’s mother, received collagen injections in her lips but had an allergic reaction which caused dramatic swelling. They carried on with filming, however, and by the end, the swelling was much less noticeable but the changes can be seen if her character is watched closely throughout the movie.

Fans of the film know that Jamie’s bucket list played a major part in the movie and the development of the relationship between Jamie and Landon, but it also had a major impact on Mandy Moore. The actress revealed it inspired her to create her own bucket list at the time which included going to college to study journalism, traveling, and learning to speak French fluently.

A Walk to Remember was filmed in Wilmington, North Carolina, the same as Dawson’s Creek and later One Tree Hill. Due to their quick filming schedule, they were able to use many of the same sets that were there for Dawson’s Creek including the school, the hospital and Landon’s home.

No two leads could have been better to tell A Walk to Remember‘s love story than Mandy Moore and Shane West, but since West was Moore’s first on-screen kiss, she was very nervous. To get the nerves out of the way, Moore revealed that Shankman made them “practice” their kiss on the very first day on set. “Our director wanted us to have a practice kiss, so we do rehearsals and everything like that, and he puts it this way, ‘Go back to one of your trailers, and have like a practice kiss, before we actually have to film.’ He was telling me that! I was so completely freaked,” Moore said. “Well the practice kiss never took place, so obviously we had to go out on set in front of all the crew and we’re shooting all night in the middle of the cemetery in Wilmington, North Carolina, and we have to, you know, kiss. And it was just weird, but then once you get into it, it’s like ‘yeah, yeah, yeah whatever.'” 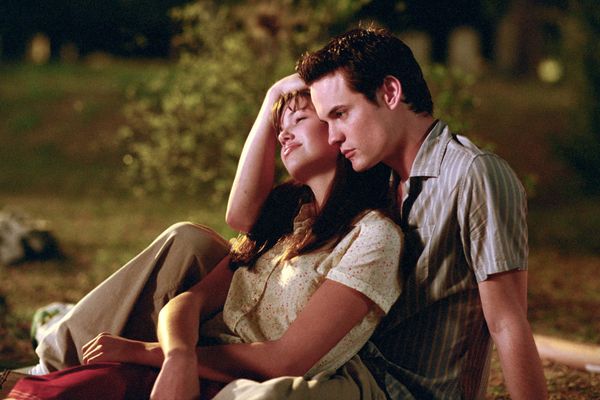