Dancing With the Stars may have started out with a focus on celebrities who try their skills on the dancefloor, but over time, the pro dancers and judges have become just as big of stars as the celebrities they are working with. Bruno Tonioli has endeared both DWTS and Strictly Come Dancing fans with his bubbly and energetic personality that can hardly be contained by the constraints of the judging panel. While he may be extremely opinionated and outgoing, away from the two shows he stays relatively out of the spotlight, but he definitely has an interesting story to tell! Here are 10 things you never knew about Bruno Tonioli:

Before becoming one of the most exciting and eccentric TV personalities as one of the judges of Strictly Come Dancing and Dancing With the Stars, he found success in much more behind-the-scenes role. Bruno’s success in the industry first came as a choreographer and he worked with some huge names including Elton John, Tina Turner, Paul McCartney, The Rolling Stones, Sting and Freddie Mercury — just to name a few. He has also provided choreography for films such as Ella Enchanted, The Gathering Storm, and What a Girl Wants.

It seemed obvious that early on in Bruno’s life that he was destined for a life in dance, and he once revealed that it has been one of the biggest parts of his life since an extremely young age. “I started dancing before I could talk. Other babies learn to stand and then walk – I just danced. At the age of three, I would leap on the table and dance if I heard music. It was something I had to do – as if my legs were moving themselves,” he said of his passion. “We didn’t have a television until 1962, but my father loved Fred Astaire and Gene Kelly, and I used to go to the cinema to watch Hollywood musicals. In the evening, I would go to the ballroom and watch my parents dance the cha-cha-cha.”

Bruno Tonioli was born on November 25, 1955, in Ferrara, located in North East Italy, to Werther and Fulvia Tonioli. When he was young, his father worked as a bus driver while his mother stitched car-seat covers and he was also raised by his paternal grandparents whom his family lived with until he was 12. “Dad was a bus driver, and when he finished work he would repair cars. Mum had a job fitting upholstery into cars, but, in the evenings, she worked as a seamstress. Despite having two jobs, she would walk home every lunchtime and cook lunch, then prepare dinner every night. When people complain that they are working hard – especially celebrities – I always remember my poor mother and think, ‘You don’t know what hard work is,'” he told the Daily Mail of his childhood and his parents.

While Bruno Tonioli is outgoing, confident and proud to be gay, it did cause problems for him growing up in a small Catholic Italian town. In an interview with Mirror, he revealed that he dealt with a lot of bullying because of his sexuality. “When I was 10 I knew there was something different about me. Everyone was football-mad but I just wanted to watch musicals and see art. It was frightening. I really WAS the only gay in the village. I was labelled ‘the queenie guy’ and ‘the queer,’ which was worst thing you could be told in Italy those days.” Things only got worse as he got older and his dancing attracted the attention of the ladies in the town. “I always danced very well, so the great-looking girls would dance around me. One night a bunch of lads got jealous about this. They shouted, ‘You poofter!’ and chased me from the club with a broken bottle, then pinned me up against a wall. I eventually chatted myself out of it with wit and imagination – but I was very lucky.”

After success working with some big names with his choreographer, Bruno Tonioli got his big on-camera break when he auditioned to be a judge on Strictly Come Dancing and was accepted even without any prior experience. “I hadn’t even filmed a pilot show, like the other judges. I had been for a couple of screen tests, but, from what I remembered of the judges from on the original Come Dancing television programme, they had been very stiff, and prim and proper – everything I am not. I refused to change the way I acted just for the screen tests, and when I heard nothing I told Arlene Phillips, my long-time friend, that I hadn’t been picked.” Just as he thought the opportunity was gone, however, he got a call two weeks before the first show that they wanted him as a judge. “I was terrified. I didn’t know what on earth I was going to say – or how the show would unravel.”

Although Bruno has found great success in the dance and entertainment industries, his parents urged him to pursue a more practical career which caused some clashes as he wanted to pursue his dreams. “My parents wanted me to work in a bank or as an accountant. Many of my teenage years were spent clashing with them because I didn’t want this – and I bitterly regret that. I understand now that they simply wanted the best for me, but I wanted to follow my dreams.” Despite that, he was extremely close with both of his parents and has said that losing them was and still is the hardest thing he has ever gone through. Bruno’s mother passed away in 1994 of a heart attack only days after she called him and mentioned she had high blood pressure and needed to take pills. “She was just 63. The shock nearly killed me – nothing could ever have prepared me for losing her so unexpectedly. I had been very close to my mother and I felt so guilty,” he said in an interview. After her death, his father’s health also started to deteriorate and a few years later in 2001 he also passed away. “The pain of losing him and my mother within seven years nearly killed me. I didn’t even know how I could keep going […] I never forget the shock of losing Mum, or the pain of Dad dying. It’s with me all the time, and it stops me from moaning about my life, or complaining about silly little things.”

After he decided to go against his parents wishes to become a banker or stockbroker, Bruno Tonioli pursued his dreams by joining a Paris dance troupe at the age of 18. The experience took him around the world and officially began what would become an extremely successful career, but it also gave him the opportunity to learn many other new things including languages! Bruno can speak Italian, English, Portuguese, Spanish, and French.

While Bruno Tonioli has never hidden his sexuality and is very happy with who he is, he has never felt the need to put his personal life in the spotlight. For 20 years he dated a man named Paul and despite all that time together he said his parents never acknowledged them as a couple which in part had to do with the fact they had separate rooms. “I always sleep on my own. I can’t sleep with somebody else. Always separate bedrooms, bathrooms, and closets. I’m very individual and I want my own space,” he explained. After 20 years, Bruno and Paul split in the ’90s and in 2000 he reportedly began dating Jason Schanne and the two were rumored to have married in 2012, but he never publicly discusses his relationship.

After growing up in a working-class family and knowing poverty, Bruno has come a very long way. The popular dancing judge has an estimated net worth of $10 million and reportedly makes more than $1 million per season of Dancing With the Stars, but he insists his humble beginnings still keep him in check. “I will never become so star-struck that I make demands and throw tantrums if I don’t get my way. I’ve had a taste of poverty and I’ve survived two great losses, and it has given me the biggest reality check,” he said of his life now.

While Bruno and his Strictly Come Dancing and Dancing With the Stars co-judge Len Goodman may seem like polar opposites, they have become the best of friends. Bruno revealed that all their time travelling and working together has led to a bond and viewers have no idea what goes on behind the scenes when the two men work together. They are on a strict flying schedule between London and L.A. for the two shows but always have fun together. “If only you could hear what Len and I say to each other when our mics are turned off and someone comes on in a ridiculous outfit or dances really badly – it’s definitely not family entertainment then. We even kick each other under the table if we find something amusing – we’re like a pair of naughty schoolboys.” 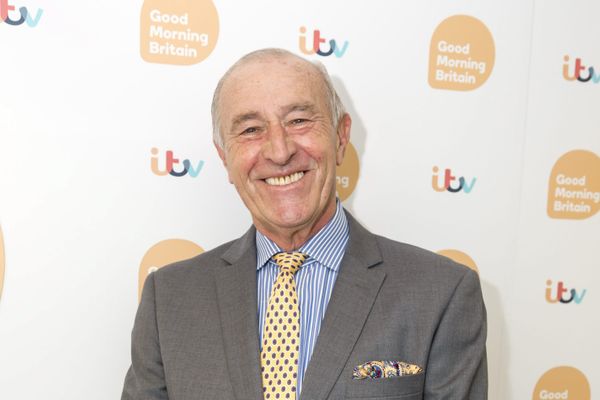