Kim Zolciak-Biermann, formerly known as Kimberleigh Marie Zolciak, rose to fame as one of the original cast members of The Real Housewives of Atlanta. She joined the series back in 2008, but left halfway through the fifth season to focus on her own reality spin-off series, Don’t be Tardy, which has become extremely successful with five seasons under its belt! The “Tardy for the Party” singer has easily become one of the most well known stars from the Real Housewives franchise with her own line of beauty products under the name Kashmere, and a brief stint on Dancing with the Stars. Despite opening her life up to the public in more ways than one, there’s still a lot we don’t know about her! Here’s a look at 10 things you probably didn’t know about Kim Zolciak-Biermann:

10. Grew Up in Connecticut

Kim Zolciak was born on May 19, 1978 in Pensacola, Florida. She grew up in Windsor Locks, Connecticut, in a military family, with her parents, Joseph and Karen, and a brother named Michael. In an episode of Don’t Be Tardy, she returned to her childhood home, 16 years after she had left. “I grew up in Windsor Locks in the 80s and 90s and I was just hell on wheels back then, I guess I still am. I just loved boys and hated school and I don’t think my parents thought I would amount to anything,” she said. She eventually left Connecticut when she was 21 and moved to Atlanta, Georgia.

She graduated from East Catholic High School in Manchester, Connecticut, in 1996, and got pregnant with Brielle almost immediately after. She moved into her own apartment when she was 19 to raise her as a single mother while trying to study nursing at the University of Connecticut. She eventually acquired her LPN (Licensed Practical Nurse) in 1999.

Kim Zolciak married the Atlanta Falcons linebacker in 2011 after meeting at a charity event in 2010. Their introduction was even caught on camera while filming the Real Housewives of Atlanta, so it’s not surprising these two have their own spin-off show together! What started off as a spin off focused on the planning of their wedding, Don’t be Tardy for the Wedding, turned into a full blown series. After only a year of dating, they married at their home in Roswell, Georgia, on November 11, 2011 and now have four children together, Kroy Jagger “KJ,” Kash Kade, and twins, Kaia Rose and Kane Ren. In 2013, Biermann adopted Kim’s two teenage daughters from previous relationships and the girls officially changed their last names to Biermann.

In an episode of Don’t Be Tardy, Kim revealed she hasn’t seen her parents or brother in a long time and referred to their relationship as ‘toxic.’ “They did horrible things to me during my years in Atlanta. I just let it go and let it go because they are your parents and they can do no wrong. Then finally I woke up and said, ‘I am done with you guys.’ My mom would charge me as a single mom to look after my kids at night, $100 at night so I could work as a nurse. It was terrible,” she said. When Kim became famous, her parents started talking badly about her to the media, which is why Kim has said her relationship with them is now beyond repair.

Similar to many other Real Housewives in the past, Zolciak has branched out from her reality TV fame to become a singer. She has tried to break into the country music scene and in 2009 she released the dance single, “Tardy for the Party,” which is where producers got the name for her spin-off show. She’s also released a few more well known songs like “Google Me” in 2011 and “Love me First” in 2012, but hasn’t experienced much success in the music industry.

Kim is no stranger to drama. In fact, she was involved in a huge scandal back when she was only 16-17-years old, way before she joined the drama-fueled show known as The Real Housewives of Atlanta. While she was a high school student, she engaged in an affair with a 49-year-old police sergeant who was interviewing her as a material witness in a case. When their affair came to light, it was a huge scandal. The sergeant was suspended for 45 days and retired two years later after serving 24 years with the department.

In March 2010, right before she met Kroy Biermann, Zolciak announced to the world that she was bisexual and in a romantic relationship with DJ Tracy Young, the woman who remixed her single, “Tardy for the Party.” The relationship didn’t last long, and one week after she announced they were together, they broke up. Kim immediately backtracked on what she had previously said and claimed it was a “a one-time deal and it’s just blown up,” she said. “We spent a ton of time together. And, you know, things happen, that’s it. I didn’t take a whole bottle of wine. I was clearly aware of what I was doing…I had a connection with her for sure. It is what it is.” She also said Young exaggerated the relationship to the media, and after the break-up, she cut all ties with her.

In an interview with E!, Kim Zolciak denied doing any major plastic surgeries, but did admit that she’s had her boobs done and had a hernia fixed by undergoing a tummy tuck. She has been accused by viewers and even Andy Cohen of having a nose job, lip injections and a face lift, but she vehemently denies them all. “I will always nip and tuck if I feel the need to do so, but I’m open about it. I don’t care. You only go around one time, and I especially understand that. And life is very short, so there’s no reason for me to lie. If I chose a life of reality television, which is an open book, so I share with people what I’ve done. There’s no secrets. I want women to feel as beautiful as I feel, and so, with that said, it’s not all natural. My boobs aren’t natural,” she said, before adding that she’s never touched her face.

In 2015 while competing on the 21st season of Dancing with the Stars, Zolciak suffered a mini stroke and was forced to withdraw three weeks into the competition. Many people speculated the stroke was because of her waist training or that she was faking it, but Zolciak said it was actually due to a genetic heart condition. “I was born with a heart defect called PFO [patent foramen ovale]. They refer to it as a hole in your heart, which is more like a valve that doesn’t close. I had a blood clot that was able to cross over to the other side, and that’s what caused the mini stroke,” she said. “My doctor said I could have had a heart attack. It was inevitable at some point in my life that I probably would have dealt with something like this.”

In an interview with E! News, the mom of six children admitted she’s open to having more kids! “We dream sometimes of having one, when I am not filming and he’s not in the NFL anymore. I never want to close that door if that makes any sense. I feel complete, I have three girls and three boys. If it never happened again I’d be happy and if it did happen again I’d be happy. I just want to have the option if that makes sense,” she said. 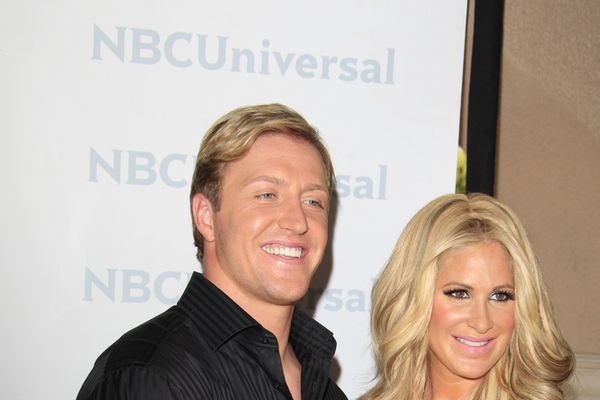