In terms of iconic American family sitcoms, Roseanne ranks up there as one of the best. The series ran for nine seasons from 1988 to 1997 and connected with audiences all over as they watched the daily life of the Conner family. Clearly, the series resonated with fans as it ended up becoming the most watched TV series in the United States from 1989 to 1990. It is almost hard to believe it has been 20 years since the series came to an end! With the revival premiering today, take a look back at the amazing series with these 10 things you never knew about Roseanne:

Back in the late ’80s, Marcy Caresy and Tom Werner of Carsey-Werner Productions were trying to come up with ideas for new shows, and came up with the idea to try to aim right at average American families. In doing so they decided that the working mother would be the central character, and Werner instantly thought of Roseanne Barr after her appearance on The Tonight Show starring Johnny Carson in 1985, saying she had the “in your face” voice they wanted. Carsey and Werner had previously been behind The Cosby Show which ABC passed on before NBC picked it up, and they first pitched Roseanne to NBC, but they passed landing the show on ABC. Matt Williams is credited as the creator of the series, and brought the show to life by producing the first season.

Over the course of the show, fans saw the role of Becky Conner change throughout the seasons between actresses Lecy Goranson and Sarah Chalke after the original actress, Goranson, had to take time away to go to school. When it came to Sara Gilbert’s wishes to go to college, however, things were different. Gilbert and her character Darlene were so important to the show that producers worked overtime with storylines and taping schedules to ensure that she would be able to do her studies at Yale University and still be a part of the cast and even did some of Darlene’s own scenes at a soundstage in New York.

It is now well known that Roseanne Barr and creator/producer Matt Williams fought often. According to Williams, Barr would often tell him he was not the show’s creator, but rather the “developer.” During the one season Williams worked as the series’ executive producer, he and Barr fought often, but he finally quit after Roseanne refused to say, “Well, you’re my equal in bed, but that’s it,” because she felt it didn’t fit her character at all. After Williams quit, Al Lowenstein became the show’s executive producer for the remaining seasons.

One of the biggest disagreements between creator Matt Williams and Roseanne Barr was over Barr’s insistence that gay characters be a part of the show. While this isn’t as controversial now, back in the ’80s and early ’90s gay characters on TV were still very rare, and as such Roseanne became one of the first primetime shows to feature openly gay characters. Barr was adamant about including gay characters because in real-life her own brother and sister are gay, and at the time said, “My show seeks to portray various slice of real life, and homosexuals are a reality.”

Fans of ABC shows saw a pattern emerging from 1995 on, and that was that a lot of ABC’s hit shows were doing Disney World episodes. Boy Meets World, Step by Step, Full House, Family Matters, and even Roseanne featured an episode of a visit to the Disney park because Disney made them. After ABC’s merger with the Walt-Disney Company, Disney required all of ABC’s family shows to do an episode there as part of a product placement effort. Roseanne took the opportunity to poke fun at their alternating Becky actresses, as Sarah Chalke portrayed Becky for the final time in season eight when the Conners go to Disney World and Roseanne says to her, “Aren’t you glad that you’re here this week?’

Over the course of its nine seasons, Roseanne was beloved by both fans and critics, yet it was surprisingly never nominated for Best Comedy Series. That didn’t stop the show and the cast from racking up numerous other awards, however. In 1993 Roseanne won the Golden Globe for Best Television Series – Comedy or Musical, as well as Best Performance by an Actress in a Television Series – Comedy or Musical for Roseanne Barr and Best Performance by an Actor for John Goodman. Laurie Metcalf also won three Primetime Emmys for Outstanding Supporting Actress, and while John Goodman was nominated for seven Primetime Emmys over the seasons, he never won one.

Roseanne was a huge success from concept to its cast, and it was all brought together thanks to relatable storylines and a writing cast who fans are well aware of now. Of the writers the show had over the years, one was none other than Joss Whedon, who is of course the man behind major shows such as Buffy the Vampire Slayer, Angel, and Firefly, and who wrote and directed The Avengers. Some of the other writers on the show are also big names such as Gilmore Girls creator Amy Sherman-Palladino, and The Big Bang Theory and Two and a Half Men creator Chuck Lorre.

In casting the David John Conner, aka D.J., the studio and producers had a long list of young male actors to choose from. One of those who tried out for the role was none other than Macaulay Culkin, who was still two years away from his breakout role in Home Alone. Although Culkin did not get the role, Sal Barone did, but things did not go smoothly from there. After appearing in the pilot episode, Barone was replaced because he hit a growth spurt, and also did not get along with his on-screen sister and co-star Sara Gilbert. Eventually, Michael Fishman landed the role, thanks in large part to Roseanne Barr who said, “I wanted Michael Fishman because he looked like my family and he was a little Russian boy. He was so not like all the other little Hollywood b–tards.”

After the series ended, fans were really hoping for a spin-off series, or a reboot in the future, and Barr kept that hope alive when she was asked about what the characters would be up to now and responded that she can’t answer that cause it is “intellectual property” that might be needed in the future. A reboot did not occur, and in 2009, she finally gave into fans with a blog post about what happened to the Conner family. In the post titled “Reunion Show” she wrote that “D.J. gets published, Mark dies in Iraq, David laves Darlene for a woman half his age, Darlene meets a woman and they have a test tube baby, Becky works at Walmart, Roseanne and Jackie open the first medical marijuana dispensary in Lanford, Illinois, and pay off the mortgage before the house is foreclosed on, Arnie becomes the best friend of the Governor of Illinois, Mom sells a painting for ten grand, Nancy and Arnie remarry, Jerry and the grandsons form a band like the Jonas Brothers, Fans shows up alive after faking his death, Leon has a sex change op, [and] Bonnie gets busted for selling crack.” In 2017, it was announced that Roseanne would be getting an eight-episode 10th season revival, which will air on March 27, 2018.

When watching re-runs of Roseanne, fans will probably notice more than one familiar face popping up as guest stars, but at the time the show had a whole bunch of young talent appear way before they hit it big. Some of the biggest stars to appear on the series before being major stars are Leonardo DiCaprio, Joseph Gordon-Levitt, and Tobey Maguire. DiCaprio was in the episode “Home-Ec” as Darlene’s friend in class; Maguire appeared in the episode “Valentine’s Day” as a boy Darlene liked but he liked Beck; and Gordon-Levitt was in four episodes as D.J.’s friend George. 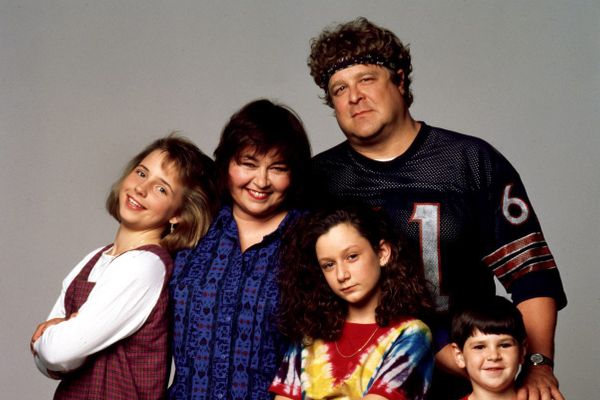