Taylor Kitsch has had a complicated relationship with his Hollywood fame. While he has a loyal legion of fans, that doesn’t include many film critics, and although his work is often ripped apart, he continuously gives his all to every role and expands his horizons. He has now been a star for over a decade thanks to his success as Tim Riggins on Friday Night Lights, yet he remains one of the most fiercely private actors in the industry. Check out 10 things you didn’t know about the handsome Canadian:

Taylor Kitsch was born in Kelowna, British Columbia, to his mother Susan Green and dad Drew Kitsch. His mother worked for the BC Liquor Board while his dad worked in construction, and along with Taylor, had two other sons, Brody and Daman. Kitsch’s parents separated when he was only one, and he and his brothers were then raised by their mom in a trailer park, and his mom had two more children, both were girls. “I was brought up in a trailer park with two brothers and a single mom,” he stated in 2013. “I like to think I don’t look at money any different than when I was young. I like to consider myself still pretty cheap.”

In 2002, when he was 21 years old, Kitsch moved to New York to pursue a modeling career; however, things weren’t easy and he ended up homeless and has spent time living in subways and his car. “I was homeless in New York for a awhile, and then I went to L.A., where I lived in my car,” he once stated about the time. He also opened up about his time sleeping on the floor of the 8th Avenue subway train. “I’d try to stay as low to the ground as possible so [security] didn’t see me. I’d get on the subway late at night and sleep for five or six hours.”

Kitsch has had a very back-and-forth relationship with film and television critics. His big break out role came in 2006 with Friday Night Lights when he was cast as Tim Riggins, and quickly became the show’s star. Although he and the show were highly praised, he has come up against heavy criticism for many of his roles, particularly in films since, like Disney’s John Carter and Peter Berg’s Battleship, but he never lets any of it get to him. “I’m very proud of John Carter. Box office doesn’t validate me as a person, or as an actor,” he said.

When he was 25 years old, Kitsch graced the cover of Men’s Health magazine and became the youngest cover guy for the publication.

Although he portrayed a star football player in Friday Night Lights, growing up in Canada meant that he took up hockey at a very young age. He began playing when he was only three and was showing lots of promise in the sport and ended up playing for the Langley Hornets in the British Columbia Hockey League. Unfortunately, at the age of 20, he suffered a serious knee injury which ended his hopes of carrying on a career in the sport. “Hockey was everything to me. I was so myopic, it’s insane,” he said of his NHL dreams ending.

After his hockey career came to an end, Kitsch decided to take nutrition and economic courses at the University of Lethbridge for a year, but then moved to New York to try modeling. Before things fell apart, he also began studying acting and became a nutritionist, as well as a personal trainer. After being homeless and relocating to L.A., he had success, modeling for brands such as Diesel and Abercrombie & Fitch.

In 2008, at the height of the success of Friday Night Lights, Taylor took a trip to Africa along with his co-star Connie Britton (Tami Taylor). The pair toured through Uganda and Kenya and became involved in a charity called the African Children’s Choir.

During his Friday Night Lights days, one of Kitsch’s taglines as Tim Riggins was “Texas Forever,” and it seems it resonated with him. In 2012 he bought almost 4 acres of land in Lake Austin, Texas, and began construction on a house on the land in 2015.

As Tim Riggins in Friday Night Lights, his signature look included long hair that always looks amazing on him, and for a while the actor was quite protective of his luscious locks. “I started growing it when I was 20, playing junior hockey,” he stated, adding he didn’t cut it until more than ten years later for the 2012 film Battleship. “I’d had it long for 11 years. Now it’s kind of got a life of its own.”

Although he’s been a star for quite some time now, not a whole lot is known about Kitsch’s personal life. He was once linked to his former Friday Night Lights co-star Minka Kelly, and previously dated model Jessica Model for a year, and was briefly linked to his True Detective co-star Rachel McAdams. While he prefers to stay out of the spotlight, in 2013, he sort of opened up about his romantic life when talking about a break-up. “Hockey’s like therapy for me. I went through a terrible breakup a while ago and it was the one thing that allowed me to actually not think about it for an hour and a half.” 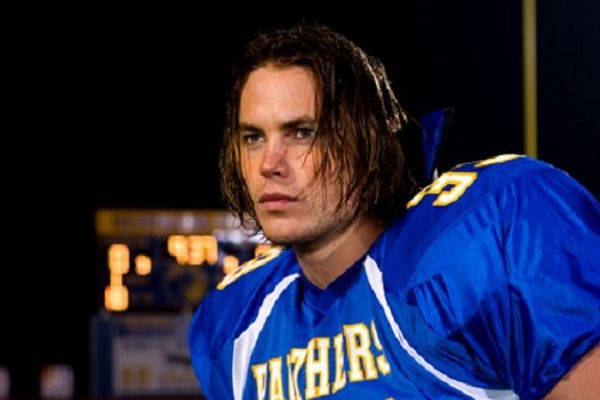