Thelma & Louise became a critical and commercial success after it was released in 1991. It was nominated for six Academy Award nominations, winning one for Best Original Screenplay for Callie Khouri. The stars of the movie, Geena Davis (who played Thelma) and Susan Sarandon (who played Louise) were both nominated for Best Actress, and Ridley Scott scored a nomination for Best Director. The film is now considered a classic, but there’s still so much that people don’t know about it, so check out these 10 fun facts about the film:

Jodie Foster and Michelle Pfeiffer were initially cast in the lead roles but had to turn them down when production was delayed. After word got out that they had dropped out, several of Hollywood’s top actresses auditioned. Goldie Hawn and Meryl Streep campaigned for the roles, but director Ridley Scott felt that Hawn was too old to play Thelma and that Streep didn’t have the roughness that the character needed. Other stars including Meg Ryan, Julia Roberts, Kim Basinger, Kathleen Turner, Cybill Shepherd and Cher reportedly also auditioned.

9. It Was Going To Be a Low Budget Indie

Callie Khouri – who wrote the screenplay – initially wanted the movie to be a low budget indie with a documentary feel to it, and she imagined actresses Holly Hunter and Frances McDormand to be in the lead. Amanda Temple was going to produce the film and Khouri was going to direct it. They shopped the project around, but consistently got turned down because the protagonists weren’t sympathetic. “We thought we’d find some fool to give us $5 million,” Khouri told Vanity Fair. They then showed it to Mimi Polk, who ran Ridley Scott’s production company and served as his producing partner, and he showed it to Scott. He initially decided that he wanted to produce it and then also decided that he would direct it after Michelle Pfeiffer convinced him.

George Clooney auditioned for the role of J.D., the robber who steals Louise’s life savings, and he was really sore that he lost out to Brad Pitt. “The funniest thing is, I didn’t watch that movie for a long time,” he told The Hollywood Reporter. “I was really stuck doing a lot of bad TV at that time. And I had auditioned and auditioned, and it got right down to Brad and I, and he got it. And I just couldn’t watch that movie for a couple of years.”

Brad Pitt may command multi-million dollar paychecks for movies now, but when he was cast in Thelma & Louise, he was still an up and coming actor who had yet to land his breakout role. Case in point, he only earned $6,000 to play J.D.! Lucky for him, this role put him on the map, so only a few years later, he earned $3 million for his part in Interview with the Vampire.

Geena Davis had a hand in getting Brad Pitt cast. He was one of four actors auditioning for the role of D.J. and he had to read with Davis. According to her, she kept messing up her lines because Pitt was so cute! After his audition, Lou DiGiamo, the casting agent, and Ridley Scott were discussing who to cast and kept talking about the other guys that had auditioned, but Davis interrupted and insisted Pitt was the one.

5. They Were Drunk During the Roadhouse Scene

According to Geena Davis, she and Susan Sarandon were able to stay cool during the roadhouse scene because they had been drinking real tequila. “We asked the prop guy, ‘Do you have any real tequila? Because it’s easier to act if we taste alcohol,” she told Vanity Fair. “So we pounded back quite a few, and we’re laughing between takes and both feeling, We’re so drunk! This is great!” Michael Madsen – who played Jimmy – revealed that Brad Pitt also had his own way of staying cool. “I walked out of the motel in the morning, and Brad would be out smoking a joint,” he said. “We got stoned together a couple of times. Every actor finds his way to make it work; that was his thing.”

Geena Davis really wanted to play Louise, so she spent a year pursuing Ridley Scott. “I had my agent call Ridley every week for almost a year,” Davis told Vanity Fair. When she finally was able to meet with him, she brought “an hour worth of notes on why [she] should play Louise.” “I launched into a passionate monologue, and at the end of this long discussion Ridley says, ‘So-o-o, you wouldn’t play Thelma?’ I realized that it actually isn’t Louise I should play; it’s Thelma,’ and I launched into that spiel,” she said. Scott wouldn’t cast her in either role until he found his other lead actress, but Davis continued to think of herself as Louise.

3. Susan Sarandon Never Auditioned for the Role of Louise

Susan Sarandon never auditioned for her role in Thelma & Louise. Ridley Scott is the one who sent her the script, and he wanted her to play Louise. “Susan had the authority, the sensibility. She was Louise,” he said. As soon as Geena Davis met with Susan Sarandon she knew that she was better for the role. “Pretty much the second Susan walked in the room, I was, Are you kidding that I could play Louise?” Davis said. “Susan was so self-possessed, so centered and together.”

2. Susan Sarandon Didn’t Want the Story To Be a Revenge Fantasy

Before accepting the role as Louise, Susan Sarandon wanted to ensure that the movie wouldn’t be a revenge fantasy come to life. She objected to Louise shooting Thelma’s near-rapist execution style. She convinced them to change it to Louise wanting to hit to him, but then loses her cool and shoots him. She also vetoed the implied sex scene in the script when her boyfriend comes to see her with emergency money. “With Thelma’s rape in her mind, Louise wouldn’t surrender to orgasm without falling apart,” she told Vanity Fair.

Director Ridley Scott wasn’t completely on board with the film’s ending, which consisted of Thelma and Louise holding hands as they drive their convertible off a cliff near the Grand Canyon so, on the DVD, there is an alternate ending where Susan Sarandon and Geena Davis’ convertible freezes as they drive off the cliff while B.B. King’s “Better Not Look Down” plays. 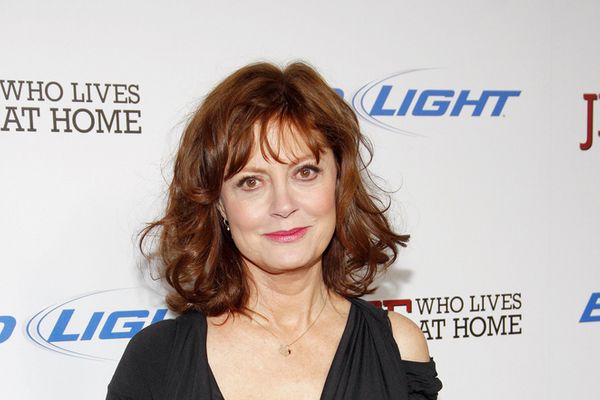