What would we do without our soap opera leading ladies? The women of daytime drama are brave, fierce, strong, and seductive. They make their shows sizzle with romance, adventure, and scandal and are half of the reason fans tune in daily and weekly. This year, we have seen some women do incredible things on soaps. Below are 12 of the hottest female soap stars for 2017.

Marci Miller joined Days of Our Lives (DOOL) in late 2016, recast in the part of Abigail Deveraux. The role was previously played by fan favorite Kate Mansi and Miller had a huge job ahead of her in making Abigail all her own. Over the past year, Abby has had her ups and downs and Marci has done a stellar job in molding the character into a leading lady on Days. Miller is clearly talented and one of the hottest things about DOOL right now and daytime drama in general.

At the age of 48, Rena is no stranger to daytime television with roles on other soaps like Another World, General Hospital, Loving, and currently plays the beautiful Quinn Fuller on Bold and the Beautiful (B&B). Sofer has even dabbled in prime time over the years, appearing regularly on hits like Melrose Place, NCIS, and Just Shoot Me. Rena has had quite a steamy year on B&B, participating in a father/son love triangle that involved Ridge and Eric Forrester. Clearly, Quinn knows how to make the rounds in Los Angeles.

General Hospital (GH) fans didn’t get to see much of Maxie Jones this year as Kirsten Storms took a hiatus for some months; however, she is and continues to be, one of the hottest female soap stars in the business today. Storms is a staple and fan favorite on the show and the interesting thing about Maxie is just how diverse of a character she is. Jones can be serious, add some comedic humor to a scene, and knows how to turn up the heat during love scenes. While she was away from set quite a bit in 2017, she was dearly missed by fans of the show. Life in Port Charles didn’t seem the same and audiences are thrilled she is back.

New to the Genoa City scene, Cait Fairbanks entered the world of Young and the Restless (Y&R) as Tessa Porter earlier this year and her character has built some incredible momentum as 2017 has progressed. She was not only involved in the huge sex ring storyline — the relationship that has developed between her and Mariah is an interesting watch. Can’t wait to see what Tessa and Cait will be up to in 2018.

Since 2008, Jacqueline Wood has been playing vixen Steffy Forrester and has helped to evolve the character over the years. Steffy is smart, beautiful, manipulative, and knows how to get what she wants. She also clearly has a thing for everything and anything Spencer-related as she’s had flings with Wyatt, Liam, and Bill Spencer. While she’s with Liam now, it seems that Steffy and Bill are entering dangerous territory. Can anyone else see an affair in their future?

Her character Gabi Hernandez didn’t have a great 2017, but it seems Hernandez sure did. Gabi not only lost Chad to Abigail, she also had to (painfully) watch them get married. However, Camila has been on fire this year as a part of this incredible love triangle between her, Chad, and Abby. The storyline had DOOL audiences divided into two teams: Team Chabi and Team Chabby. Gabi lost at the game of love this time around. Here’s hoping 2018 is a better year for her.

At the age of 29, it’s hard to believe that Christel is a soap opera veteran. Truth is, she stepped into her Lily Winter’s Y&R role in 2002 and remains one of the hottest female stars on the soap. Her character reached new heights this year as she was embroiled in an intense storyline involving her cheating and lying husband Cane. This just may be the end of the Lily and Cane era, but Christel is sure to do some interesting things with the character come the new year.

With well over 25 years of soap opera experience under her belt, Heather Tom remains one of the hottest female soap stars currently in the daytime drama industry. She’s beautiful, talented, and diverse. While Y&R fans grew to love her as Victoria Newman from 1990 t0 2003, B&B audiences are dazzled with her daily as she plays the dynamic Katie Logan on the show.

Rebecca has played the same GH character for over twenty years now and still wows audiences weekly with her portrayal of Elizabeth Webber. The interesting thing about Liz is that while she is a good friend, mother, and nurse, she does have her moments when she can borderline on villainess. This year, Webber has not only engaged in an interesting romance with Franco Baldwin, but she’s struggled to help her son Jake with his mental health issues. Liz is not only a beautiful lady, but a strong one at that and offers so much depth to storylines.

Playing the fierce and sexy Chelsea Lawson, Melissa Claire Egan is one of the best things about the Y&R today. The Lawson character is one that has evolved significantly over the years. She’s beautiful, smart, dedicated to her son, is a career woman, and currently a fan favorite amongst audiences. She also happens to be Nick Newman’s girlfriend, but that may not last long. She’s been hiding a secret from Nick for months now about his son’s true paternity. Next year should be an interesting one for Chelsea and Melissa as this storyline is sure to explode.

Salem’s prodigal daughter has returned and DOOL fans everywhere rejoiced when they found out Alison Sweeney was going to return to the Sami Brady character in the fall of 2017. Sami has hit the ground running and dived right back into Salem’s storylines without skipping a beat. It’s almost like she never left. Alison is not only the hottest female on Days right now, but one of the hottest in the soap opera industry today.

This year has been all about the big soap opera returns, and with Steve Burton back on GH, this has thrust Kelly Monaco’s Sam McCall character right into the spotlight. Not that Sam has ever really taken a back seat in any storyline as one of the top leading ladies on the show. Sam endured a lot in 2017 — she had a baby, dealt with a mental health issue, thought her husband was going to die, and now realizes that the man she is married to and had kids with might not be who she thinks he is. Kelly had an incredible year on GH, she and Sam will undoubtedly have a bigger year ahead once January hits. 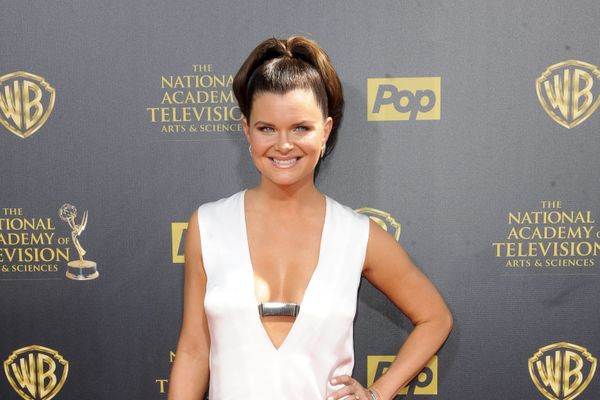