It is undeniable that love makes the soap opera world go around. When it comes to daytime drama, we have seen many couples hook up, break up, and at times make up. There have been a ton of twosomes that simply don’t work out, are terribly toxic and then there are those that make our hearts skip a beat. There are dozens of couples that could fit into this list, and opinions vary so much when it comes to soap opera fans. Alas, below is a list of popular soap opera couples ranked:

Sharon and Nick share a deep love, rich with history. It seems no matter how hard they try and no matter how many terrible things they do to each other, they always end back in each other’s arms. These two were high school sweethearts that ended up getting married and starting a family in the mid- ‘90s. They have been on-again-off-again ever since, as both lovers, friends, and co-parents. They fight, then makeup, become friends, and then somehow seem to fall in love with each other, over and over again, despite affairs, secrets, and lies. Right now, they are in the friend zone, but who knows for how long and if that will all change.

These two are proof that love and super couple status can occur at any age. While Maggie did have an incredible love affair with Mickey Horton, she certainly has achieved something special with the Greek tycoon. They came together later in life, and after having to deal with Vivian Alamain’s schemes, Maggie and Victor eventually said “I do” in 2011. While Victor has always been a hard (and sometimes vile) nut to crack, there is definitely a softer side to him now that he is with Maggie.

These two have incredible chemistry together, and Sonny has always had a soft spot for Brenda. They hooked up in the 1990s and started out in a somewhat controversial relationship as Sonny was an established mobster in his 30s, while Barrett was heading into adulthood at around 18 years of age. They’ve been on-again-off-again, with a little bit of toxic behavior mixed in between. Their 2011 marriage was a massive flop, which lands this super couple at the bottom of the list.

There’s nothing Nick Newman loves more than reuniting with an ex. He consistently tries to give it the only college try with Sharon (time and time again), and has even given Chelsea Lawson more chances than she deserves. Then, there’s Phyllis, and for one reason or another, these two can have a major disdain for each, and yet find it hard to keep their hands off each other. Is it the love, or their chemistry in the bedroom? Regardless, they still make an incredible super couple when they are together.

Steffy and Liam have broken up and gotten back together many times since they first met ten years ago. Liam professes to love Steffy, but the problem is, he always goes running back to Hope at the first opportunity. He’s broken Steffy’s heart many times over the years and although there are still some Steam fans left, most Steffy fans are happy she’ll finally be getting a new love interest. Could viewers have seen the last of Steam?

It is undeniable that Sami and E.J. had a ton of chemistry between them, but they were also quite toxic for one another. Despite this, they managed to walk down the aisle together three times and raised two beautiful children together (along with Sami’s two other kiddos with Lucas Horton). Sadly, this union ended with E.J.’s passing in 2014, but they seemed to have picked up where they left off (offscreen) since it turned out that he was very much alive.

Teenage, puppy-love romance turned into something far more special when Emily and Nikolas grew into adults and continued their relationship. There was such a special connection between these two, and Cassadine hasn’t been the same since Em passed away in 2007. Will he ever find real love again? Maybe if Emily makes a return!

While Lawson’s relationship(s) with Nick has always been a flop, there’s just something right about her being with Adam. Both being former cons, they just “get” each other like no one else in Genoa City can. Which makes it no surprise that they can break up, only to reunite at the drop of a hat.

Taylor first appeared on the B&B in 1990 and she and Ridge started dating shortly after Ridge’s wife Caroline passed away. Tridge was quite possibly one of the most popular super couples the B&B has ever seen. Ridge and Taylor had great chemistry between them and were on and off for years. But Taylor always had to compete for Ridge’s affections and although he did choose her occasionally, Brooke usually won his heart.

Affectionately known to Internet fans as Chabby, this DOOL couple has sure had their fair share of ups and downs. These two have suffered through mental health issues, other Salemites interfering in their marriage, and then there was that time when everyone thought Abby had passed away! Alas, they do have two children together, and love clearly still exists between this couple despite their rollercoaster of a relationship!

Anna and Duke are truly a love story for the ages. From their time together in the late ‘80s, ‘90s, and early 2010s, they kept fans on the edge of their seats with a romance that tugged at everyone’s heartstrings. While Lavery passed on in 2012, in the land of soaps, a return is always possible!

There’s just something about Billy Abbott that Victoria can’t resist. Is it his charm? That cute smile? His carefree attitude? Or the chemistry they share? While they are on-again-off-again, when they are “on,” they are great together, especially during the earlier years of their relationship.

This popular couple has been on and off for years now, having first met at a party Brooke’s family catered at the Forrester estate 33 years ago. They were immediately attracted to each other and have been married countless times. Brooke believes Ridge is and always will be her destiny. And no matter what happens (or who comes between them), Bridge is never apart for long.

These two make an incredible super couple, and at the end of the day, the only thing that has come between them are other people trying to scheme their way to the top and rip the relationship apart. Carrie and Austin have been together since the early ’90s and it is comforting to know that they are still going strong today, no matter where DOOL storylines may go.

This GH super couple has a romance that has spanned well over a decade, and fans still can’t get enough of them. They have dealt with fertility issues, lies, secrets, baby momma drama, and disappearances, but they still always seem to come out on top, together. The good news is they seem happy right now as a growing family of four with their two little ones; however, the bad news is that happy couples don’t last long in daytime drama. There’s a good chance that, despite any trouble looming, they will probably still be okay for it.

This love affair has been going on for over two decades now, and the couple seems to have only two statuses when it comes to their relationship: together or fighting. But this is what makes them so great, yet so predictable. Even when they fight, and they have had plenty to argue about over the years, they always (always) get back together.

After all these years, Patch and his Sweetness still know how to turn on the romance in Salem. The couple got together in the late ‘80s and since then DOOL fans have been drawn to them and their story. While Steve “passed away” in 1990, fans of the soap waited 16 years for his return and he and Kayla would eventually reunite in 2006. They’ve had plenty of ups and downs since, but when all is said and done, these two belong together.

When things are going well between these two, rainbows and sunshine can be seen on either side of Port Charles, but when things are going bad – watch as the toxicity starts flying! Carly and Sonny are a good couple, with tons of chemistry and love between them, not to mention plenty of history; however, add in a little miscommunication and secrecy to their relationship, and the claws come out … for both of them. 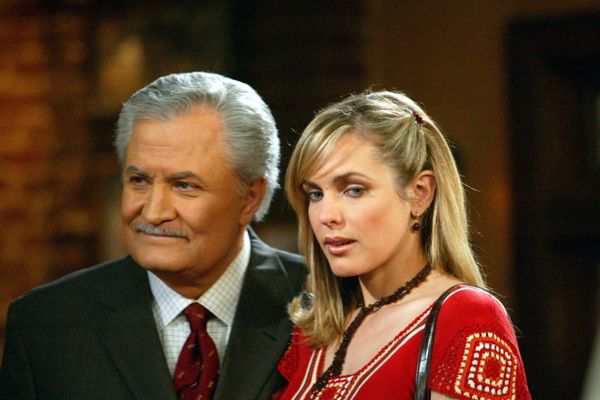