Celebrating an engagement is one of life’s biggest milestones, so more often than not, it’s associated with some kind of grand, romantic gesture. Many celebrities have shared the story behind their engagements. Some are surprisingly low key, while others are way over the top! From mile high proposals, to renting out entire stadiums, here are 14 of the most romantic and elaborate celebrity proposals we’ve ever heard of!

This couple keeps it pretty low-key, but the Breaking Bad star did share with his fans the story of how he got engaged to his now-wife Lauren Parsekian. The two were on a New Year’s trip to Paris and just happened to be slow dancing with each other on a stoop near the Eiffel Tower when he “begged” her to marry him. In an interview with People, he said: “It’s just this little courtyard outside of this hotel, and we were just dancing to Edith Piaf by ourselves on New Year’s and then I begged her to marry me.” We highly doubt Parsekian needed to be convinced to say yes!

This marriage is long gone now, but back in the day when Katy Perry and Russell Brand were an item they were head over heels for each other. The comedian got down on one knee during a candlelit dinner he’d arranged while on a romantic getaway to Jaipur, India. This story sounds like something out of a movie, but we promise it did happen! At the stroke of midnight they watched a show of New Year’s fireworks while they sat on top of an elephant, and then Brand asked if she would be his wife.

Ludacris’ motto when it came to his proposal was ‘go big or go home,’ so he went big! “I look at myself as a pretty romantic guy. I’m a creative guy. You gotta be creative, you gotta be different. And these things stick with a woman for the rest of their lives so I had to go above and beyond,” said the rapper during an appearance on The Ellen DeGeneres Show. He whisked his now-wife, Eudoxie Agnan up in a private plane while in Costa Rica and had the phrase “Will you marry me” written in giant letters on the grass below! “Of course she burst into tears and was just extremely happy. So it was a pretty original idea,” he said.

These two are constantly under the watchful eye of the media, so Prince William travelled all the way to Africa to do his proposal in private! He asked the Duchess of Cambridge to be his wife during a 10-day African safari in Kenya. “It was very romantic,” said Kate Middleton to the press. Her engagement ring, with the famous blue sapphire, previously belonged to William’s mother, Princess Diana.

These two are over-the-top with everything they do, so it’s no surprise that Kanye West went all out when it came time to pop the question to Kim Kardashian. He decided to do it on her 33rd birthday and set it all up at the AT&T Park in San Francisco. Once he got her there, he had a full orchestra and a pyrotechnic display that said, “PLEEEASE MARRY MEEE!!!” which lit up right as he got down on one knee. As if that wasn’t enough, Kanye also planned to have her entire family there, so once she said ‘yes,’ they all came out to join in on the celebration!

In an interview with Marie Claire back in 2008, the America’s Got Talent host revealed how her now ex-husband, Seal, popped the question — it’ll give you chills! It all happened during a vacation to the Canadian Rockies back in December 2004. “[Seal] took me by helicopter. He had an igloo built there, and they’d brought up everything: a bed with sheets inside the igloo, rose petals everywhere, candles. Very, very romantic!” she gushed. “There was food and champagne, and then the helicopter left. It was a little scary, too, because you’re so cut off from the world. No trees, nothing — it was hardcore. But I was ecstatic.”

These two A-list actors got engaged after only two months of dating! Even though their marriage didn’t last, the epic story of Tom Cruise’s proposal lives on. It all went down in the most romantic city in the world, Paris! In 2005, he took her to the top of the Eiffel Tower early in the morning and presented her with a ring. There was no big reveal for their engagement, later that day during a press meeting with reporters, Cruise simply said: “Yes, I proposed to her. It was early this morning at the Eiffel Tower, so I haven’t slept at all. Today is a magnificent day for me; I’m engaged to a magnificent woman.”

Joe Manganiello and Sofia Vergara are one of the cutest couples, and the story of how the Magic Mike actor proposed makes us love them even more! He popped the question during a vacation in Princeville, Kauai, and went to great lengths to make it perfect for his bae. “I had a big speech in Spanish, and that’s what I was nervous about. The last thing you want to do is like mess up the Spanish on the proposal to the Colombian woman,” he said during an appearance on Live! with Kelly and Michael. Part of his speech was “Eres mi todo,” which means “you are my everything.” So sweet! “You only get one chance to do it, and if you’re gonna do it, you gotta do it right, so there’s a lot of planning that goes into it,” he said.

Former Desperate Housewives actress Eva Longoria became engaged to businessman Jose Antonio Baston in December 2015. The whole thing was over-the-top but in a good way! The president of Latin American media company, Televisa, popped the question with a ruby and diamond ring while the two were in Dubai working with Global Gift Foundation. Longoria shared a picture on her Instagram afterward which showed the two sharing a kiss in front of what appears to be a lounge area of pillows and Persian rugs in the middle of the desert sand dunes!

NFL quarterback Tom Brady made his biggest touchdown in 2008 when he proposed to supermodel Gisele Bundchen, and she said ‘yes!’ He decided to harness the spirit of Christmas and pop the question on Christmas Eve. Brady took his now-wife on a ride in his private jet which was filled with dozens of white roses and, of course, some champagne. To top it all off, he surprised her by including her parents who were also on the plane to watch it all go down.

Mariah Carey is all about the glitz and glamor, so former-husband Nick Cannon really had his work cut out for him when it came to plotting his proposal. Just in case the first time wasn’t enough, Cannon proposed to Carey not once, but twice! The first time he took her to the top of her Manhattan apartment where he presented her with a 17-carat diamond inside a candy ring pop. A few days later, he proposed again! “He sort of kidnapped me and took me on a helicopter ride. Then he re-proposed,” she said to Elle.

Not surprisingly, this Dancing with the Stars couple got engaged on stage. After performing Sway in Miami, Maksim Chmerkovskiy got down on one knee, in front of all the other dancers and a captivated audience, and said: “I’m in love with you, and I will be in love with you for the rest of my life.” She, of course, said ‘yes’ to his show-stopping proposal and told People that it will be something she cherishes for the rest of her life.

By now Dean McDermott has definitely worn out the words “will you marry me?” but when he proposed the first time around it was actually really cute! They’d only been dating for three months when the actor took the Beverly Hills, 90210 actress on a horse-drawn carriage ride through a Christmas Tree farm on Christmas Eve. McDermott had organized for the whole farm to be lit up with twinkling lights, and at the end of the path, he’d set up a table in the middle of all the Christmas trees. On top of the table was a diamond and sapphire ring!

Shameless actress Emmy Rossum recently married director and Mr. Robot show creator Sam Esmail sometime in 2017. Ahead of tying the knot, Esmail perfected the most romantic proposal we’ve ever heard of! In an interview with Vogue, Rossum revealed that the two always read the “Modern Love” section of The New York Times together, even when they aren’t together, she’ll read it to him over the phone. On the night of their engagement, Esmail had Rossum read him the paper, but since she wasn’t feeling well, she read it from the bathtub. “I began to read the article, and the story is about a director who falls in love with an actress, and I started to think: Huh, that’s strange. And then I realized it was our love story….And then, I kind of scanned to the end and it said, ‘Love, your Sam.'” By the time she’d finished reading, he was at the end of the bathtub on one knee with a vintage Chaumet diamond engagement ring from 1920 they’d spotted at a store two years prior. 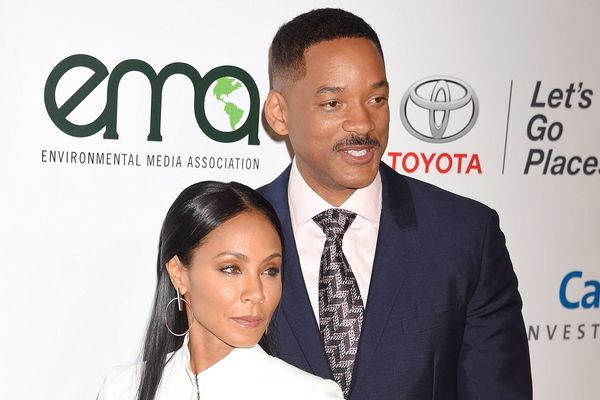