Good couples are those who have great chemistry  mixed with solid communication. The best couples out there can somehow manage to overcome insurmountable odds and still find a good level of happiness in order to move forward. When it comes to daytime dramas there are plenty of couples out there — some are okay, some are good, and some are the best of the best. The land of soap operas had some incredible storylines and plot twists this year, with some great couples that struggled through them all to come out on top. As such, below are the nine best soap opera couples in 2016.

9. Sharon and Dylan – The Young and the Restless

This choice will undoubtedly be a controversial one, which is why they are at the bottom of this list. Yes, Sharon lied about Baby Sully’s true identity. Yes, she went to great lengthens to hide this and manipulated the situation. Once the truth was revealed, she also ruined any chances Dylan may have had when it came to visitation rights to Christian. But alas, the beauty in this relationship is that Dylan has accepted Sharon for who she is, and despite all her faults, is standing by his wife. This has to be a true testament to their relationship and love. Even his mother Nikki cannot sway him when it comes to Sharon.

It’s hard to imagine anyone with Hope but Bo; however, Rafe Hernandez has certainly stolen her heart and the hearts of fans everywhere! Considering the fact that these two are a relatively new couple, Rafe has gone above and beyond what a normal boyfriend would do. He kept her secret about killing Stefano; he battled a returning (and blackmailing) Aiden Jennings; he continues to support Hope from jail; and is desperately trying to clear her name. This year hasn’t been a good one for this duo, but it has proven to strengthen their bond. Here’s hoping this couple can enjoy a more peaceful and passionate life together come 2017.

It was hard to see Lulu and Dante separated this year, but the couple seems back and in top shape. They were able to overcome the affair Dante had with Lulu’s cousin Valerie in late 2015, and Lulu was also forgiven for her role in Valerie’s kidnapping. While they do have dreams of giving Rocco a sibling, this may have already come true. As we all know by now, it seems sweet little Charlotte Cassadine is part Spencer. Perhaps GH fans should be happy with the little bliss this couple has experienced as of late, as their relationship will continued to be tested come 2017.

6. Lily and Cane – The Young and the Restless

These two have been through it all over the years: lies, manipulation, false identities, fertility struggles, and cancer. Despite all this, they have managed to rise above all their issues and continue to have one of the greatest relationships in Genoa City today. This year the duo struggled with a first: infidelity. While there was a point in 2016 when Y&R fans thought the two would not make it, as the year progressed they managed to re-ignite the flame and move on. Cane forgave Lily for her affair and the two have picked up where they left off. Steamy love affair back on … nurse outfits, hotel room rendezvous, flirtations at the office and all!

When Nathan’s ex-wife Claudette rolled into town and exposed one of his biggest kept secrets, it seemed like all bets were off for this GH super couple. Charlotte trailed into Port Charles shortly after Claudette, and it seemed like the duo were going to have to struggle in a co-parenting relationship with Nathan’s obsessed ex. Thankfully Charlotte is not Nathan’s and Maxie has accepted what Nathan did in his past. Seems like the West/Jones wedding is still on and one that many GH viewers will not want to miss come 2017.

Carly and Sonny had an emotional 2016 and as the year ends, they have been able to find comfort in themselves. The death of their son Morgan almost tore their relationship apart. Now that we know Sonny was not attached to it, it seems these two are back on the right track … for now. GH fans are well aware that Nelle is spinning a web of deception and while we may not know what she is up to, we do know that it is no good. Will she succeed to rip this GH super couple apart in 2017? Only time will tell.

3. Nikki and Victor – The Young and the Restless

A couple doesn’t stay together for over thirty years without enduring a little bit of hardship. Victor and Nikki have had their ups and downs, but 2016 proved to be one of the low points in their relationship. Alas, as the year progressed, 2016 also made them a stronger couple for it. Victor was hauled off to jail and Nikki was utterly disgusted by his role in bringing Marco Annicelli to town. But once Victor was gone, Nikki mourned incredibly. While Victor played it cool in prison, it was clear how much he loved her when he risked it all to save her from Ian Ward. These two were separated for most of 2016, but as the year wound down, they were back in each other’s arms … as per usual.

What can we say about JaSam? They spent plenty of years apart, and this past year, they more than made up for it. As soon as Jason found out who he was and gained his memory back, he went running to Sam. The beauty of this all was the fact that they were able to come together as a couple, reunite with little Danny, and finally be the Morgan family they were meant to be. So, it seems that as 2017 looms, the family is going to further expand with a new addition come February. Does this mean that these two can finally soak up their happily ever after? Here’s to hoping!

1. Kayla and Steve – Days of Our Lives

This ‘80s super couple continued to wow Days fans well into the 2000s, and this year proved to be no exception. They have history, chemistry, and a love that can last well beyond the decades. Patch and his Sweetness struggled quite a bit in 2016, battling Ava, sickness, kidnappings, cult craziness, issues with Joey, and so much more, but they endured all of it and are stronger for it. Despite Kayla’s somewhat wandering eyes this year, she ended up back in the arms of her true love. They had a hard 2016, but next year just might be looking up. Spoilers indicate that these two just might be headed to the alter come 2017. 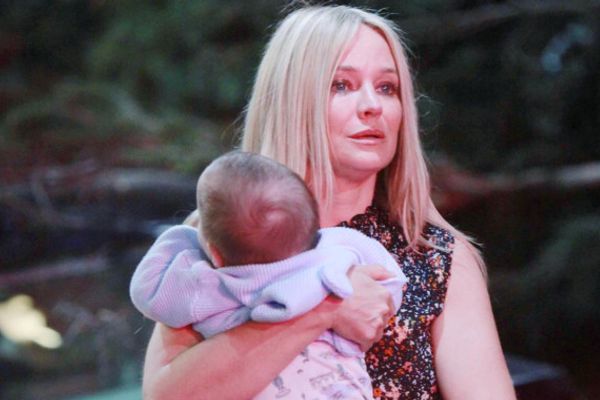