Caroline Manzo was one of the original cast members of The Real Housewives of New Jersey, but she left the show in 2014 after the fifth season. This Manzo matriarch was a fan favorite for many viewers because she was often the voice of reason among all the other ladies; she didn’t put up with any nonsense and has strong respectable family values. Luckily for her fans, she wasn’t gone from TV long. She and her husband, Albert Manzo scored their own Bravo show called Manzo’d with Children which is now onto the third season. The show follows Caroline and her family, who we all got to know quite well while she was on RHONJ, through all their business ventures and relationships. Lauren Manzo, Caroline’s daughter married long-time boyfriend Vito Scalia in July 2015 on the show, and her two other sons, Albie and Chris Manzo are both working hard to build up their businesses — BLK water, their restaurants, and Chris’s new children’s book called Oliver Brightside You Don’t Want That Penny. Albert continues to run the Brownstone business and Lauren recently announced she and Vito are expecting their first child together which means Caroline is about to become a grandmother!

Dina Manzo has been a cast member on The Real Housewives of New Jersey on and off over the past seven seasons. She was a main cast member for season 1 and 2, then a guest in season 4 and a main cast member once again in season 6. Being on the Real Housewives alongside her family ended badly for Dina. She began feuding with her sister-in-law Jacqueline Laurita and her sister Caroline Manzo which is why she left the series after two seasons. She only returned when Caroline and Jacqueline both left and since then her relationship with her family has continued to go up and down. Fans of the show get mixed messages from both Caroline and Dina — they briefly reconciled in 2014, but since Caroline recently appeared on WWHL and said their relationship is nonexistent, they are once again on the outs. During her hiatus between season 4 and 6 she produced an off-broadway comedy called My Big Gay Italian Wedding and starred in Dina’s Party on HGTV which followed her event planning company. Dina now lives in California and is dating 36-year-old Dave Cantin, a commercial broker. Her divorce from Tommy was finalized in February 2016. Manzo claims she was offered a spot on season 7, but turned it down because she no longer lives in New Jersey. She’s also been focused on her nonprofit organization, Project Ladybug, which focuses on giving financial and emotional aid to children and families undergoing serious medical treatments.

Amber Marchese joined The Real Housewives of New Jersey in season 6 to replace Jacqueline Laurita who had left after season 5. Amber was easily linked to the group because she was an old friend of Melissa Gorga! When she joined the show she definitely fit in well as she wasn’t afraid to speak her mind or make new friends. Marchese also had a heartfelt story about how she battled breast cancer, but survived. She didn’t end the show on a good note because her husband Jim created a wedge between Amber and a number of the other women on the show. Since she left the show, she’s once again run into some bumps in the road when it comes to her health. She announced in April 2015 that her cancer had returned and she is receiving treatment. Also she’s recently been diagnosed with Lyme disease. Amber and her husband, Jim were also involved in a brief media scandal when her husband was arrested after he allegedly grabbed her by the throat and threatened her. Amber has publicly denounced these claims and said it was all a misunderstanding. His charges have since been dropped. In an effort to remain in the spotlight, Amber and Jim both joined the newest season of Marriage Boot Camp: Reality Stars. Amber has also expressed interest in writing a book geared toward giving health advice.

Nicole Napolitano joined The Real Housewives of New Jersey alongside her twin sister, Teresa, for season 6. The two made a huge name for themselves while on the show as they were loud, emotional, sassy and opinionated — just what the New Jersey fans expect from their cast members! This season she’s returned but only as a guest, so we will be seeing a lot less of her. Today Nicole works on her podcast, Girls in Heels, with her sister Teresa. The two of them claimed they filmed a pilot for their own show, but it hasn’t been picked up, so only time will tell if they’ll be returning to the small screen! When she appeared on the show, she didn’t really get along with Teresa Giudice…I think we all remember the “clink clink” hand motion, but these days she’s a lot closer with the Giudice’s and all of that fighting is in the past. Nicole has said that she and Teresa made up immediately after the reunion and have been in close contact ever since — Teresa even thanked the twins in her book Turning Tables! It’s unclear if Nicole is still with her former boyfriend Bobby, but neither have posted any pictures together in the past year, so we’re guessing probably not!

The other half of the loud twin duo was Teresa Aprea. She appeared on The Real Housewives of New Jersey as a main cast member for season 6 and but was demoted to a guest spot on season 7 when production decided to go back to its “New Jersey roots” by asking Jacqueline Laurita to come back on the show. Teresa works on a podcast with her sister Nicole called Girls and Heels and both have discussed on their show that they’ve filmed a pilot that they’ve been shopping around, but it hasn’t been picked up. She is still married to her husband Rino. Together they both run their award winning restaurants, Angelo’s of Mulberry Street and Ponte Vecchio in Bay Ridge. The twins made up with Teresa Giudice soon after the reunion which is something the fans never got to see, but they are actually all good friends now. Teresa’s husband, Rino is good friends with Joe Giudice and checked in with the family while Teresa was away. Also the first meal Teresa had when she got out of prison was lobster from Angelo’s restaurant!

This Housewife still technically appears on the show, but she’s lost her coveted main cast member spot. She began as a guest on season 2, then became a main cast member from season 3 to 5. In season 6 and 7 she appears briefly from time to time as a friend on the show. Kathy Wakile is the cousin of veteran Housewife, Teresa Giudice. Their relationship has been rocky during her entire time on the show, but she definitely grew into herself while on the show. She’s become more outspoken among the women and even started her own baking business! Kathy started a dessert line called Dolci Della Dea and released a dessert cookbook called Indulge in 2014. Her business has been expanding as she’s gone from selling cannoli kits to gluten-free desserts, to specialty coffees and now jewelry! In 2013 she and Rich purchased a lot and began building their dream home which was finished back in January 2016. Two years ago the Wakile’s were swept up in a pretty big scare when their daughter Victoria had to undergo two brain surgeries in order to remove a benign tumor. Kathy talked about it during her last reunion appearance and nowadays it seems like things are going much better now, but they aren’t totally in the clear. Victoria recently graduated from Caldwell University and will be pursuing a career in nursing.

This Housewives has gone down in history as one of the most controversial women to ever join the show. She was one of the original women cast, but she only stayed around for two seasons because her past kept coming back haunt her. The entire time she was on the show she battled it out with all of her cast mates as she was confronted about being a stripper and being arrested. Since leaving the show Staub has put a lot of effort into remaining in the spotlight. In 2010 she appeared on the Style Network for a show called The Dish and released a book titled The Naked Truth where she attempted to explain her side of the story revolving around her criminal past. Then in 2011 she was on The Bachelor: On The Wings of Love alongside other washed up reality stars like Heidi Montag and Jake Pavelka. She tried her hand at another reality series, VH1’s Famous Food, but more recently she’s fallen off the map. It was reported in 2011 that she signed a three-year deal with Scores Gentleman’s Club to appear as a nude stripper and star in an adult online film, but a few days after signing she went back on the deal and said she was seeking psychological help and treating an addiction. She filed for bankruptcy in 2012 and in August 2015 she announced an engagement to Navy Seal Joe Masalta, but by December 2015, they ended their engagement. Recently she’s just been spending time with her family and has stated that she plans to write a tell-all book revealing secrets about her time on RHONJ. 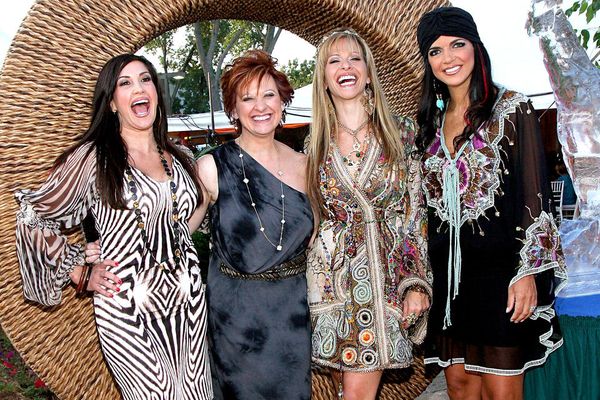 The Real Housewives Of New Jersey: Behind The Scenes Secrets