Pretty Little Liars is currently on its seventh and finale season. The show, which began airing in June 2010, has taken viewers on quite the journey. There have been so many twists and turns, fans don’t know what to think – which is why so many of them have come up with their own fan theories to try and shed some light on what is happening in the show. We have collected 7 of the most ridiculous fan theories – check it out!

One fan theory alleges that Alison is the one who killed her sister Charlotte. According to the fan theory, Ali never forgave her sister for tormenting her and her friends and only pretended to get close to her so that she could exact her revenge. The evidence: Alison seemed to have changed when she came back in season four after being in hiding, but it wasn’t real – she was still the same mean girl she used to be. Also, Charlotte is the reason why Alison had to disappear to begin with, so this is considered her motive.

6. Spencer Is Uber A

A Tumblr user named The Outlast alleges that Spencer Hastings is Uber A. The Outlast argues that Spencer calling Sharon Stone’s character in Basic Instinct a “genius” for writing a novel to cover up her murder was the first indication that she could be A. Then, after Charlotte’s murder, Spencer claimed it happened in a similar way to a scenario that she wrote about in a college essay. The Outlast also noted that Spencer’s Mary Queen of Scots Halloween costume was proof of her duplicitous because Mary plotted to kill Queen Elizabeth. Then there’s her connection to the sanitarium Radley. All of the other As have had a connection to Radley and she’s the only one of her friends to have spent time there. Sounds pretty tenuous, but you never know with Pretty Little Liars!

Tumblr user AlisYellowTop believes that Maya faked her own death because we never actually saw her dead body – just a body bag. Also, Maya’s alleged killers, Nate/Lyndon James never confessed to the crime and her death has some striking similarities to Alison’s staged death (i.e. body bags, police cars and even the music was same in both scenes). Considering that Alison wasn’t actually dead, Maya could also be in hiding, but it doesn’t seem very likely.

Early on in the show, there were two separate incidents where Hanna was told things that she shouldn’t have known while she was dreaming. One of the dreams occurred while she was kidnapped by A.D. and during the dream she was told how to escape. She also had a dream that Alison told her about Noel Kahn pushing someone down the stairs and when she told the others about it the next day, Alison’s expression suggested that the story was true. This got fans thinking that Hanna must be clairvoyant, but she probably just got lucky.

Another fan theory claims that the girls blinding Jenna with the firecracker wasn’t a prank gone wrong and that Alison was blackmailed by A into throwing a firecracker into the garage where Jenna was. Alison was receiving texts from A long before A started harassing the other girls, so blinding Jenna could have been one of A’s first demands.

Many Pretty Little Liars’ fans believe that Aria could be A. The group started receiving texts from A around the time that Aria came back to town after a yearlong absence and, according to her friends, she is the best liar. In the season two finale, when the girls find A’s layers with the dolls representing each one of them, Aria’s doll is wearing a hoodie – just like A does. There’s also the opening sequence for the show, which features Aria saying “shhh” as if she is hiding something. All of the evidence seems rather tenuous at best.

1. Nothing in the Show Is Real

Some Pretty Little Liars’ fans are convinced that nothing on the show is real and that it is just a hallucination of a mentally ill patient at Radley Sanatorium – the mentally ill patient being Aria! The fan theory alleges that Aria is being treated for multiple personality disorder and schizophrenia and, after catching her dad having an affair, she begins mentally breaking down. Each of the four characters is one of her personalities. Alison is a former friend who she killed during a psychotic rage and Ezra was just a guy she met at a bar once and then hallucinated the relationship. Even the characters in the show aren’t real – they are just patients at Radley. 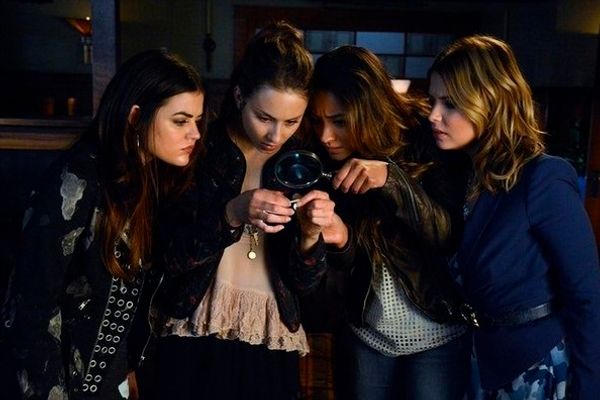