Fans of Teen Mom 2 have had a wild ride following the stories of Jenelle Evans, Chelsea Houska, Kailyn Lowry and Leah Messer, but out of them, all Leah has had one of the most intense and most intriguing journeys of all. Since 2010 audiences have watched Leah welcome twins with Corey Simms, marry Corey, divorce Corey and then go on to marry Jeremy Calvert, welcome a daughter with him and also get divorced. It was a shock when things fell apart between Leah and Jeremy, and emotional to see Leah go through so much heartbreak. As the two work out co-parenting and Leah once again navigates the life of a single mom, take a look back at 8 things you never knew about Leah and Jeremy’s relationship:

Those who have followed Leah’s entire story since her debut on 16 and Pregnant in 2010 know that her life moves very fast. Leah and her first husband Corey only knew each other a month or so before becoming pregnant with their twins, and after her split from Corey fans were astounded by how quickly she seemed to rebound with Jeremy. In fact, the relationship did start as fast as it seemed, as Corey and Leah finalized their divorce in June 2011, and Leah and Jeremy began dating a month later. To make things more awkward, their romance started after Jeremy began messaging Leah on Facebook and their mutual connection on the social platform was none other than Corey! After messaging for a day or two the pair began texting and Jeremy asked her out almost immediately.

After their first date, Jeremy and Leah were exclusive almost immediately and the rest of their relationship kept up the whirlwind pace it started with. Only a few months after they began dating, Jeremy proposed to Leah on Christmas Day 2011 with a 1.5 carat princess cut diamond ring and Leah helped pick out the ring. “She and I had gone window shopping first, and then I had a buddy go with me to buy it,” Jeremy said. The pair wasted no time in planning a wedding and were married on April 4th 2012 at Catlettsburg Wedding Chapel in Kentucky in order to apply for a home loan together. A couple weeks later they celebrated their wedding with a big lavish lakeside ceremony in South Carolina, less than a year after their first date.

Although their relationship seemed to be moving fast, it was unclear how quickly Leah wanted to become a mom again, and shortly after her April wedding to Jeremy it was announced that the pair were expecting a baby. While many weren’t surprised, it was then discovered that the pair had actually already become pregnant but sadly lost their child in early 2012 when Leah was eight weeks pregnant. In 2013, the pair opened up about the loss to Dr. Drew during the Teen Mom 2 season three reunion special. “I had a miscarriage. I don’t know if it was just stress or what,” Leah said about the loss while Jeremy added, “I think about it every day, just wondering what he or she would be like.” Fortunately, the pair had a successful pregnancy in 2012 and welcomed their daughter Adalynn “Addie” Faith on February 4, 2013, five weeks early.

While Leah had much more hope in her relationship with Jeremy than her previous one with Corey, it wasn’t long before cracks in their marriage began to appear. In season five, Leah and Jeremy seemed to get into a lot of fights and Jeremy didn’t want to come home from work and threatened Leah with a divorce. “He does it all the time. I can’t tell you how many times he’s thrown this ring in my face,” Leah said during one argument in season six. In the end it seemed that Jeremy wasn’t able to deal with Leah’s increasing mental health issues as the house fell into disarray when he was away for work, leading to a blowout fight in their car while taking Ali and Aleeah to a cheer competition.

While the dissolution of their relationship was emotional and intense already, things got worse has rumors of infidelity once again spread. Many were shocked when none other than Robbie Kidd, Leah’s ex-boyfriend and the man she admitted to cheating on Corey with only weeks before their wedding, came forward and said she had cheated on Jeremy with him too. Although Kidd reportedly made these claims, things got more complicated when Corey and Leah seemingly admitted to a fling of their own in the early months of Corey’s marriage to Miranda. Since Corey and Miranda were married after Leah and Jeremy, that meant Leah had cheated on Jeremy with Corey as well. However, it seemed that Jeremy had quite a few cheating rumors of his own, and it appeared as if infidelity definitely played a part in their separation.

After all of the rumors and threats of divorce, Jeremy finally filed for divorce in late 2014, according to reports, and in the meantime Leah sought treatment for stress and mental health. Eventually the divorce was finalized in June, 2015 just over three years after the pair were married and was done while Leah was still in treatment, so it had to be done over the phone because she couldn’t physically attend. “I had court. I had to go, like, talk on the phone,” Leah explained. “But our divorce is final. With Jeremy and I, just like, something just didn’t feel right. And I stayed because I didn’t want the embarrassment of another divorce. But you know what, I’m letting it go.”

In season five of Teen Mom 2, fans saw some of the worst fights between Jeremy and Leah, during which Jeremy revealed even more about their personal lives. In one particular fight, he became angry for Leah for “going through money like water,” and stated that she spent “hundreds of thousands of dollars” and said they hadn’t paid their taxes on time. Apparently, things got worse for them both and pushed Jeremy further away when the couple were reportedly given a tax lien of more than $10,000. While they did pay it off shortly after, Leah took to her Twitter to defend her “spending issues.”

By the end of Leah and Jeremy’s relationship things had become fairly hostile, and while they co-parented for the sake of Addie, they were definitely not friends. Then, in April 2017 many questioned if the pair were back together after Leah posted a selfie of the two out at a bar, and Jeremy quickly spoke to The Ashley to clear up the rumors, “This past weekend, I went to the bar by myself because basically everyone in town was at a concert that was going on in Charleston. After the concert, everyone started coming into the bar including my friends and Leah and her friends. It wasn’t planned or anything, it just happened we went to the same place. So everyone told us to take a picture together. So we did and we posted it.” He also said, “Me and Leah are not back together, we’re strictly friends. If I run into my ex-wife, we’re going to act like mature adults for the sake of our child. If people don’t understand that they can kiss my a–,” and then added, “MTV tries to make things look like Leah and me don’t get along, but that’s not true. Things are never going to be perfect for a divorced couple with a child, that’s true, but things between us aren’t bad.” 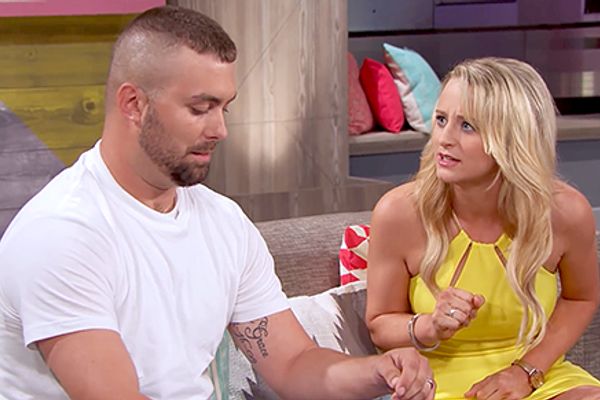