This fiery Italian couple has become one of the most iconic and controversial couples in the entire Real Housewives franchise. Teresa and Joe Giudice have been starring on The Real Housewives of New Jersey since the show began back in 2009 and have risen to reality stardom together over the past seven seasons. Viewers love to watch the family dynamic of the Giudices because of the hilarious way that they banter with each other — even Joe and Teresa! It’s no secret this family has been through a lot in the past few years and fans have been privy to a lot it through the media and by watching RHONJ. It’s no surprise their legal troubles have put a huge strain on their marriage at times, but despite all their hardships, Joe and Teresa’s relationship has only gotten stronger and it’s clear this family is in it for the long haul. In honor of their most recent wedding anniversary, here’s a look at 8 things you might not have known about Teresa and Joe Giudice’s relationship!

Teresa and Joe were friends for a long time before they got married. In fact they knew each other even before they started dating. Teresa has talked about her past with Joe briefly on the show, usually to reinforce that she’s known Joe her whole life. They met when they were only 16-years-old so they kind of grew up together. “I’ve known him my whole life. Our parents were friends and so we’ve known each other our whole lives. Our first date was when I was 17. I would say when I started driving, that’s when our first date was. We didn’t start [seriously] dating until I was 23,” said Teresa.

7. She Always Had a Crush on Him

In her most recent memoir, Turning the Tables: From Housewife to Inmate and Back Again, she revealed that she always had a crush on her husband Joe, even before they started dating! She said Joe was always the “bad boy” in school and that’s what attracted her to him when they were growing up. In grade school, she said she would walk past his classroom in the hopes of catching a glimpse of him!

These high school sweethearts have miraculous timing! The amount of time they dated and the timeframe of their engagement was exactly the same — down to the month! “We dated for a year and 8 months, and a year and 8 months [after getting engaged] is when we got married,” said Teresa. Teresa and Joe were married on October 23, 1999. The ceremony was held it he Cathedral Basilica Church of the Sacred Heart, which was later followed by a reception at Nanina’s in the park of Bellville. Their wedding was extremely ’90s! The theme was based off the ’98 film starring Gwyneth Paltrow Shakespeare in Love and their first dance was to the 98 Degrees song, “I Do (Cherish You).” They just celebrated their 17 year wedding anniversary and, even though Joe is currently incarcerated, he made sure to send her a huge bouquet of rose on the special day.

The reality couple have four daughters together, Gia, 15, Gabriella, 11, Milania, 10, and Audriana, 6. Joe and Teresa didn’t wait long after they were married to start having children. They had their first child only six months after getting married, “We knew each other our whole life, so it was like whatever happens happens, and we were pregnant with Gia six months later.” She also shared the fact that one of their daughters was a surprse! “Milania was a surprise, and she happened in Punta Cana on the beach. Total surprise. Her and Gabriella are 16 months apart, and I wanted to wait. I didn’t want it to happen right away, you know? At Gabriella’s year birthday, I was already showing with Milania,” said Teresa.

Similar to many other couples who are in the limelight, Joe and Teresa have fared their share of tabloid rumors. There have always been rumors of infidelity, starting from when he got that mysterious phone call in Napa to when Jacqueline blurted out during a reunion special that Teresa had caught him in the act on the desk of his office. However, most recently, the rumors are that Joe was cheating on Teresa while she was serving her 15 months in prison. These were further speculated on season 7 of The Real Housewives of New Jersey when guest star Kim DePaola made a brief appearance and used her air time to talk about the rumors at her fashion show and even suggested they were true. Teresa had already confronted the rumors on the show and made it clear that even though she has “old school values” she would never stay with her husband if he had cheated on her. She also went to point out that, if it had really happened, the alleged mistress would have come forward by now for her 10 minutes of fame. “It’s like, put it to rest. We are happy together, we’re happily married. It’s nonsense,” she said.

Teresa Giudice always boasts proudly about her old school values. In fact, all of the Italian women on The Real Housewives of New Jersey do this. In one of the most recent episodes in season 7, Teresa talks about her marriage with Joe and how it’s based on these old fashioned values and how a huge part of it is sticking with each other through sickness and health, the good and the bad. “I thought we had the perfect life when I married Joe. Growing up, I figured we’re gonna get married and that’s it — perfect life. Would I have wanted to have the same life that my parents had? Of course. But I’ve come to accept it now. It’s just sad. I guess I’m kind of old school in a way. The generation now? They would have been like, ‘Later!’ They would have divorced him in a second.”

It’s no surprise that many people have lots to say about the relationship between Joe and Teresa, especially when it comes to their legal troubles or infidelity rumors. It’s quite admirable how well these two are able to let all the negativity roll of their shoulder or even just shut it out and focus on each other. Despite everything that her husband put her through, Teresa would never even whisper a bad comment about Joe and vice versa. Through all of the hardships they have faced in the past few years, they’ve always been able to maintain their sense of humor which is surprising, but heartwarming! Teresa is notorious for not letting things bother her and always looking on the upside when her world is crashing down. Some people call her delusional, but it might be because her husband Joe is the same way! In an interview with Teresa Giudice, she said her favorite thing about Joe is the fact that he makes her laugh. “We always find a way to laugh. He’s very carefree and easygoing, always in a good mood,” she said.

It’s common knowledge now that both Teresa and Joe were sentenced to time in prison after pleading guilty to multiple offenses including conspiracy to commit wire fraud, bankruptcy fraud and even mail fraud. Teresa served her 15-month sentence in 11 and a half months and Joe went to prison last March to begin serving his 41-month sentence. This has undoubtedly put a huge strain on their marriage and been hard on their four daughters, but Teresa has said that they find their own ways to get through it. “I talk to him every day, sometimes twice a day. He calls me and we email constantly throughout the day, and I see him every week,” she said. 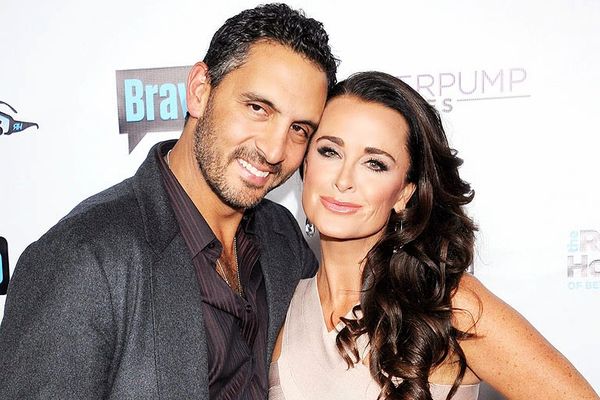