It’s true! We love to see our favorite celebrities fall madly in love! But sometimes, they take their public displays of affection sessions way too far, and when you know the world is watching, you’d think you’d know you don’t have to broadcast everything! This list takes a look at the celebrities who have at least some of us shielding our eyes from their over the top PDA.

9. Will and Jada Pinkett Smith

Will and Jada have an epic long marriage for Hollywood, and maybe, just maybe, the secret is their constant PDA. Will has been captured kissing Jada’s neck on the red carpet and sharing a steaming makeout session on the beach! Jada has even shared secrets directly from their bedroom on Facebook. The actress posted a rather racy photo and wrote, “I discovered the sexiest secret the other day. My husband takes pics of me in my sleep.” And while we’re happy that these two have been able to keep their love alive, do we really need to know what’s even going on behind closed doors?

Kim Kardashian and Kanye West may be known for having the cash, but not the class! These two are willing to drop any amount to publicly display their love. Kim rented out the entire Staples Center to celebrate Kanye’s 38th birthday, and Kanye rented out all of San Francisco’s AT&T Park for his proposal, but the extravagant displays don’t stop there! Kim has taken to Instagram to post pictures (yes plural pictures) of the couple, not just smooching, but of her licking Kanye’s face! And while Kim did get famous for a “leaked” sex tape, these pics are more PDA than any of us care to see!

Robert Pattinson and FKA Twigs were captured getting hot in heavy in their beach chairs in Miami back in 2014, but that’s not the only time these two have been caught in the act of some serious PDA! The two are rarely seen not holding hands or with their arms around each other. And then of course there is their PDA session at the Brit Awards that was captured by fans and lit up the social media scene.

#fiftyshadesofjohnson!? Like really?! This married couple had no problem lighting up Instagram when they posted racy pics from their Fifty Shades of Grey inspired photo session! The pair recreated scenes from the infamous tale to celebrate Valentine’s Day! Nothing says romance like a little S&M!

The former Twilight actress used to be extremely shy around the cameras and did her best to keep her relationship with co-star Robert Pattinson under wraps. However, this has all changed in her new relationship with French singer, Soko. The couple have been spotted out and about recently and are often holding hands, making out in public and at one point sucking each others thumbs…that’s right. Oh how things have changed for Kristen!

While this infamous couple may have parted ways, we can’t erase those images of PDA from our memories! From the time he turned 18, Bieber was all over social media with then-girlfriend Selena Gomez, posting selfies of the couples kissing and getting cozy. When photographers captured them on the beach, they were always touching and things even got steamy when the Biebs carried Gomez with her legs wrapped around his waist, into the water. Justin Bieber hasn’t let their breakup slow him down either. In early 2016 he was busy posting Instagram pics of him locking lips with model, Hailey Baldwin.

John Legend is known for writing songs that people like to do the deed to, but his comfort with the whole naked thing, has become very public knowledge. The couple posed for a sexy shoot for DuJour that didn’t leave much to the imagination. Teigen has also confessed that the couple are members of the mile-high club, and there are countless pics of the two smooching and getting cozy while attending A-list events. They’re adorable, but, just put it away!

Back in 2006 this couple spent some time together on the beach that heated up the tabloids. In the picture, Monaghan is holding himself up, while on top of his Lost co- star. The couple was on-again off-again for a long time and eventually split, but once again dirty laundry was aired on social media when Dominic implied that the split was because Evangeline had cheated on him. Damn, dude! Keep your biz on the DL!

If you’re going to break up a marriage, it better be for true love, and with these two, it seems to have been! LeAnn Rimes and hubby of four years Eddie Cibrian have long been the subject of much juicy gossip, and many believed their love fest was a play to the tabloid showdown that is their lives. But after all this time, the Instagram selfies keep rolling in of the couple in the throws of marital bliss, kissing and enjoying the “fireworks” and the couples’ love seems to be enduring. 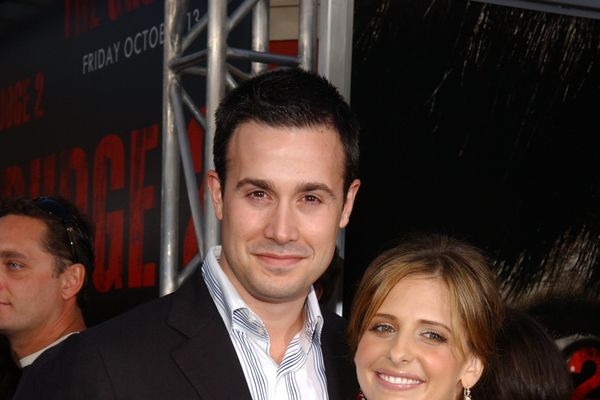 11 Celebrity Couples Who Got Together Young And Stayed Together