ABC’s hit show Dancing with the Stars is known for being a breeding ground for relationships and hook-ups. Whether it’s between two pro dancers or a dancer and their partner, the long hours and intimate setting of the show fosters a lot of lovin’. One of the best and most beloved couples to come from the show is Peta Murgatroyd and Maksim Chmerkovskiy. The two DWTS champs are the picture perfect couple — they are absolutely adorable together. The New Zealand born, Australian raised dancer began dating her Ukrainian-born fiancee back in 2012 and since then their relationship has been a little on-and-off. But lately, their relationship is definitely ON! Ever since they got engaged in front of all their friends on stage last December, these two have been busy planning their wedding and are currently awaiting the arrival of their first child, a little baby boy! Just because we love them so much, here’s a look at 9 things you might not have known about Maksim Chmerkovskiy and Peta Murgatroyd’s relationship:

9. What She First Thought of Him

The two dancers met when they were both cast in the Broadway production Burn the Floor back in 2009. Nowadays, Peta Murgatroyd is head over heels for Maks Chmerkovskiy, but she admits that her first impression of him wasn’t the best. She thought he was extremely arrogant! He defends himself by explaining that his attitude is just a defense mechanism. “No, I walked in the way I walk in and…it’s just a lot of presence.” He also teases her that she was actually in love with him at “first sight and just doesn’t want to admit it” which she kind of owns up to. She said she always had an attraction to Maksim, but she never acted on it because he was previously engaged to fellow pro Karina Smirnoff and she was dating fellow dancer, Damien Whitewood. The arrogance thing isn’t too hard to believe because, before he settled down with Peta, he definitely generated a “bad boy image” for himself, but Peta insists that’s just a facade and he’s actually an extremely gentle person.

8. They Have a Strong Friendship

Peta and Maks have known each other for a long time and worked closely together for quite some time so they developed a strong friendship before they started dating. “I learned to like him because I found out he wasn’t that arrogant. He was really generous to the entire cast, and our friendship grew and grew,” she said. “He sponsored me for my first via: I came to him as a friend and said, ‘What do I do?’ I didn’t expect he would go that far for me.” He was there for her during some really important times in her life like moving to America and landing a gig on Dancing with the Stars. “It was a whirlwind experience and again Maks was a friend and mentor,” she said. It wasn’t until the season finale that the two realized they had a lot of chemistry. “The crazy, insane chemistry between us was electric. We came together like magnets. That’s how I felt anyway. We couldn’t deny it any more and finally did something about it. He took me on a couple of dates.”

Peta and Maks have always been a picture perfect couple, but not everything that looks perfect on the outside is on the inside. After dating for only 10 months between 2012 and 2013, Maks unexpectedly broke up with Peta. “My heart was broken. But when we were driving to the airport after the breakup talk, he literally asked me why I was taking all my bags and clothes back. I was like, ‘We just broke up. Why would I leave anything behind?’ That’s when I knew it wasn’t really over for forever,” she said. Maks has since said that he knew immediately that he had made a mistake because his family shunned him and his “close knit circle of friends” all loved her and he showed a ton of remorse over the loss of their relationship.

Maks admits breaking up with Peta back in 2013 was a big mistake and now Maks realizes he’s lucky she took him back. “I realized right away that I’d made a mistake. So I would take every opportunity to hover around,” he said. But despite knowing he never should have let her go, he did state that he needed that time apart to get to a position where he could propose. During their break up, both Peta and Maks were linked to other people, but after only three months apart they reunited. “I dodged a bullet [by getting her back] because she could have fallen in love with somebody else and this never would’ve happened. So I would take ever opportunity to hover around,” he said.

Being on a hit show that also tours in the off season means these two are no stranger to hectic schedules and nurturing a long distance relationship. Back in 2015 when Peta was traveling around the country for the summer Dancing with the Stars Live! tour, her and Maks were forced to spend a lot of time apart, but Maks made sure that it didn’t become a big deal and he described it as a small bump in their journey. “We just decide to not go longer than a couple weeks [without seeing each other]. It’s a hiccup in the grand scheme of things. There’s a whole life together depending on how you take care of yourself,” he told People. He also gushed about how awesome Peta is and that their relationship is “amazing.” In order to make sure they were seeing each other often, he would often join along for the tour (not on stage) and bunk for a few days on the tour bus.

Ever since she got engaged, Peta has been flashing around her giant diamond ring everywhere she goes, and we don’t blame her! It’s evident Maks put a lot of time and effort into designing the ring and he chose an Italian jewelry company called Cantamessa to design it. “Their women’s designs have been worn by royal families all over the world. I was Skyping with a group of Italian jewelry markers that are fourth or fifth generation!” He picked out the rock and they did all the designs for him, so to him it was an easy process! Although he got lucky by having an amazing designer work on his ring, Maks admits getting her ring size was a little trickier! He said he went through her phone and jewelry box in order to find some examples, he even tied a string around her finger while she was sleeping! “It was a stealth mission,” he said in an interview with People.

Even though his elaborate and very public proposal took not only viewers by surprise, but also his family! Maks said he’d been planning and thinking about it for a long time so it definitely wasn’t just a sudden decision, but he didn’t tell anyone about his plans beforehand, not even his mom or dad! His brother Val didn’t find out until about a half an hour prior. Despite not doing much planning or preparation for his proposal, he had been thinking about it for a long time. “I kind of knew a couple of years ago. But it’s a process. With this family, the hardest part of the process was to keep it a secret. This was definitely the best decision I ever made,” he said. Maks got down on one knee during a live performance of Sway: A Dance Trilogy in Florida on Dec. 5, 2015 in front of an entire audience and asked Peta to marry him! He started out by saying, “I’m in love with you, and I want to be in love with you for the rest of my life. And if you’ll have me, I want you to be part of mine.”

2. Part of the Family

Chmerkovskiy has said that his family loves Peta just as much as he does, which is definitely important when it comes to making a relationship work! In fact, his family was pressuring him to pop the question for a long time before he did it. But in his eyes, it didn’t matter how quickly he did it because she knew, he knew and his family knew she was going to be a part of the family one day. “I mean, they were all giving me the stink eye here and there, but she was already family, and this is just a formality,” he said. His younger brother who is also a DWTS pro, Val Chmerkovskiy said something similar when asked about the two of them getting married. “The thing is, Peta’s been part of the family for so long, it was a natural thing, but it was [also] an overdue thing. We were all waiting for it. But I think when it happens, it’s fairly surreal and it’s beautiful,” he said.

The newlyweds announced they were expecting their first child in May 2016 and, despite it being a bit of a surprise considering they are planning on getting married in July 2017, they’ve both always wanted kids. Before they found out they were having a little boy, Maksim said he wanted to have a girl first: “a little girl first, then a little boy. I think an older girl would be more responsible. I was an exceptional older brother, but I think that was just a one-in-a-billion thing,” he joked. Meanwhile, Peta had said she want a little boy first and then a girl — and it looks like she got the first half of her wish! At a recent red carpet event, the couple shared that they cannot seem to agree on a name just yet. Maks told Extra that he wants something “unique” considering they had a name picked out, but it quickly went out the window since their friends in New York just welcomed a child of their own and used a name that Peta and Maks wanted. 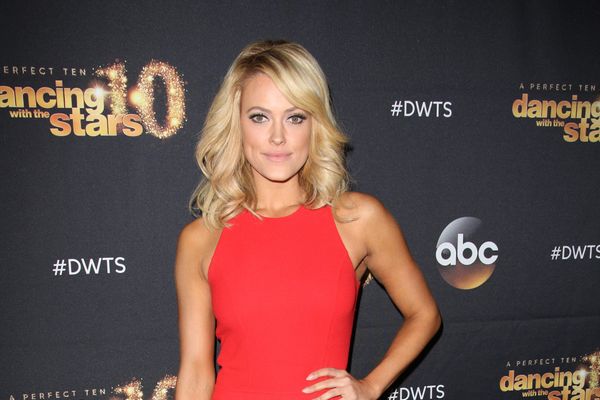 Things You Might Not Know About DWTS Pro Peta Murgatroyd