It’s been almost 20 years since the ever-popular soap opera Another World (AW) was canceled, and to this day fans still miss watching the daily saga that would unfold in Bay City. Viewers could not get enough of the power struggle in the publishing world, with Cory Publishing always at the forefront of the drama. AW had unique storylines, plot-twists, and romance ruled the roost. There were many couples over its 35-year tenure, with some romances that seemingly stood out above the rest. Below are seven AW couples that had the best chemistry.

In the early to mid-90s, a young Matthew Cory entered a business partnership with the mature, yet sexy, Donna Love. As they ran KBAY-TV together the two simply could not keep their eyes off each other and the duo fell in love, even though Love was significantly older than Cory. Relationships were quite that prevalent back in those days on soaps, and when it did happen it was for gold-digging reasons. Donna and Matt truly did fall in love and shared incredible onscreen chemistry during their romance. The two also got married. Alas, the relationship did not work out, but fans can still remember the spark that these two shared onscreen.

Mackenzie Cory may have been the love of Rachel’s life on AW, but she and Carl truly shared something special. Once enemies turned lovers, this duo created many incredible and magical love scenes over the years. They had a certain something when they were together and it could’ve been because of their hate-turned-love romance or simply a spark they had. While they did end up together after Mac passed away, Carl still held a very special place in Rachel’s heart. The duo not only got hitched but had two children (twins, because AW loved twins that popped up everywhere), Elizabeth and Cory Hutchins.

In the late ‘80s, Amanda Cory was married to the love of her life, which at that point in time was Sam Fowler. Sam was an artist that took care of their daughter Allie, and Amanda was the money-maker business executive that brought home the bacon. Enter Evan Bates (well, really Evan Frame). Evan and Amanda got quite close while working at Cory Publishing together and, by the early ‘90s, her willpower snapped like a twig and these two had a hot and steamy affair. Many fans may not have liked the pairing between Evan and Amanda, but it was undeniable that they had a tremendous amount of chemistry together.

They shared that classic good girl falls for bad boy romance. Paulina was from the upper side of town, while Jake was from the wrong side of the tracks. They were married twice during the duration of the show, but their first marriage was a bit of a sham. In the early ‘90s, Jake was originally hired by Paulina’s half-sister Iris with orders to seduce her to try and uncover information that she wasn’t a Cory. And seduced her he did! The information he found allowed Iris to blackmail her with it all. Paulina then shot him, trying to stop the insanity. Jake then blackmailed her into marrying him (he could go to the cops and have her sent to jail after all). In the end, all these negatives turned into one big positive, and the two had quite the romance.

Jamie Frame dated many leading ladies while in Bay City. The handsome doctor and son of Rachel Cory made him quite attractive to many. The fact that he was good-looking, smart and a stand-up guy didn’t hurt either. In the late ‘80s, he fell in love with Lisa Grady and the two shared a connection that made them a favorite super couple on the show. Unfortunately, their romance was cut short, thanks to a scheming Vicky Hudson. Wanting her for himself, she manipulated and seduced him to the point where he did end up sleeping with her. After some additional scheming, Vicky got pregnant and the child ended up being Jamie’s. Lisa broke it off with Frame and left Bay City, never to be heard from again.

Sweet Jenna Norris arrived in Bay City around the same time musician Dean Frame entered the scene as well. While she gravitated towards Matthew Cory at first, Jenna couldn’t resist the temptation of the ruggedly handsome Dean. The two began a special relationship sometime around 1991, got very wrapped up in the music scene and Dean’s up-and-coming career as a superstar. As with most couplings, the best chemistry comes from when opposites attract, and these two shared some memorable times on AW. In fact, when Dean left town to embark on a world tour, Jenna swiftly followed him.

While there have been many incredible AW couples over the years, none had the spark or undying love like Vicky and Ryan. The irony is, while the two shared an amazing love story, they never ended up getting married when all was said and done. Ryan saved Vicky from a horseback riding incident in 1990 and the two had an instant magnetic connection. Both were good looking and the matching of wits and flirtation at the beginning of their relationship made for great daytime television. Sadly, their love was also like a roller coaster ride of breakups and makeups. Ryan’s brother and mother were part of the reason these two never said ‘I do’ but Vicky’s scheming didn’t help either. In the end, Ryan was shot and killed when he tried to save Vick’s life, and in an odd twist of events, they did have a wedding during a heavenly out-of-body experience on Vicky’s part. Despite that cheesiness, the couple hits number one for their connection, romance, inability to live without each other, and their undeniable chemistry. 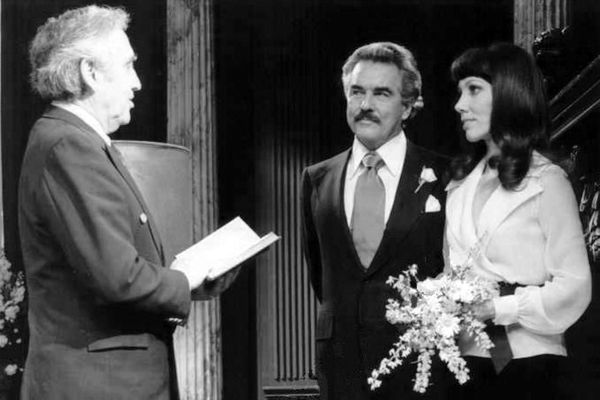