The Real Housewives of New York City is one of the most popular shows within Bravo’s Real Housewives reality franchise. The series premiered back in 2008 shortly after the first season of The Real Housewives of Orange County aired, and it’s been a huge hit ever since. One of the best things about RHONY is that many of the original housewives are still on the show today! Despite a few women coming and going each season, the majority of the cast has a long history with one another. As a result, fans have been given the chance to get to know these women quite well and see their dynamic friendships either dissolve or evolve over time. Since season 9 is about to air, here’s a ranking of the season 8 ranked worst to best:

Luann lands herself as the worst housewife on the show because more often than not she’s embroiled in a feud with one of the other ladies, whether it’s Ramona, Bethenny or Carole, it’s just never ending with her! She tends to make the other women on the show mad because of her condescending attitude which has been an on-going problem since she joined the show back in 2008 as the Countess. Luann used her title to reign over the other women, always dishing out lessons in either etiquette or class. She even wrote a book back in 2009 called “Class with the Countess: How to Live with Elegance and Flair.” We must admit, she’s gotten a lot better, but she still has the tendency to be bossy and she’s a bit of a hypocrite! She relentlessly picked on Carole for dating a younger man while Luann herself admits to sleeping around and she has been accused of using her friendships with some of the other women, mainly Bethenny, to further her own agenda. All in all, we’ve seen a big difference in Luann, especially since she met her new fiancé, Tom, but she’s still got a long way to go with some of the other women on the show!

She made her debut in season 8 as the self-proclaimed Jewish-Asian housewife. While she did her best to stay out of the drama while the cameras were following, it wasn’t after the cameras stopped that things really became quite dramatic in her life. It turns out that her husband, Michael, was having an affair and the two are now embroiled in a nasty divorce and custody battle. She won’t be coming back for season nine, which is disappointing because she ended up getting along quite well with her co-stars. Also, her storyline this season would have been much more interesting with her divorce and all.

Ramona Singer — also known as Ramona ‘stinger’ — is one of those people who fans either love or hate, there’s no in between. Ramona is a valuable veteran housewife because she always brings the drama — no one is safe around her! This season she turned on one of her closest friends, Dorinda Medley. She can be a bit hot and cold which is probably why hanging out with her is often referred to as being on the ‘Ramona coaster.’ You just never know what you’re going to get with her! She’s definitely hardworking, resilient and extremely business savvy, but just don’t get on her bad side! Probably every woman on the show has been in a fight with Ramona at some point and she’s no stranger to saying ‘I’m sorry’ because it’s often as a result of her bad attitude or unfiltered mouth. She’s got a little problem with speaking before thinking! Similar to Luann, Ramona has gotten a lot better recently. Ever since she divorced Mario she’s loosened up a little bit with some of the other women and isn’t as judgmental as she once was. Ramona is an OG of the series and we’re pretty sure she’s not going anywhere anytime soon!

This particular housewife has grown a great deal since she joined the show back in the first season. She took a brief hiatus when her career and personal life started taking off and she got two of her own spin-off shows on Bravo. She seemed to have it all — the husband, great career and even a daughter, but it was short-lived. Her nasty divorce with ex-husband Jason Hoppy has clearly caused a lot of stress in her life. After a failed talk show, she decided to go back to her reality TV roots and once again become a housewife. She’s definitely a fan favorite because of her hilarious one liners, quick wit and no nonsense attitude, but since she returned on the show in season 7, she’s become a bit of a mean girl and emotional wreck. We must admit she is very ‘real’ and doesn’t try to be something she’s not, but sometimes she’s just downright rude. We saw clear examples of that when Kristen Taekman and Heather Thompson tried to befriend her and then again with Jules Wainstein. In season eight, Bethenny had a huge blowout fight with Luann and called her some nasty names. While a lot of people might agree with her about her opinions regarding Luann, she really needs to start keeping some of these opinions to herself.

Sonja is hands-down the quirkiest housewife on The Real Housewives of New York City. She is a fan favorite on the show because she’s just so harmless and naive that sometimes she gets picked on by the other housewives and all she wants to do is fit in with the other women and have fun! When she first joined the show back in season 3, she definitely put on a facade that she was more than she’s worth, but that all came crashing down when she found herself filing for bankruptcy and being sued for millions of dollars. She loves to reminisce about the good old days when she was married and wealthy, but she tends to look back when she should be planning ahead! Sonja has a great sense of humor and she’s probably been the mouth of some of the best Real Housewives one liners in the franchise! She’s very open about her love life, financial problems and career pursuits, but often finds herself in hot water with the other women for being to aloof and scattered brained. Nonetheless, Sonja is our comical relief on the show and she definitely gets picked on by the stronger mouthier ladies. She’s a girls-girl and if we had a choice of one housewife to have a drink with — she’d be it!

Dorinda Medley is one of the newer housewives on the show, but she quickly became a favorite among fans. This loud-mouthed New Yorker is not afraid to voice her opinions (loudly) or drink too many dirty martinis. Dorinda is undoubtedly the life of the party and one of the few housewives who has a strong friendship with each and every one of the ladies. Last season she bonded with Carole over their shared experience of losing a husband, and she has a friendship with Ramona that dates back over twenty years. Of course, she’s been in a few tiffs with the other women on the show, but she’s rarely the target of their childish gossip which speaks volumes about how much they respect and value her friendship. Dorinda is an admirable woman, not only because she’s suffered such a tragedy and come out on top, but also because she sticks to her guns! She’s butt-heads with Bethenny, Ramona and Sonja during season eight, but she stays true to herself through it all and knows the show is all about having fun. We hope she stays around for the long haul!

No one would be surprised to see Carole at the top of this list. Radziwill is easily the most ‘normal’ housewife on the show because she’s extremely level-headed, never succumbs to the drama and has a great sense of humor! Usually being a calm and collected housewife leads to the pink slip and getting fired, but Carole has managed to dodge that curse and maintained her relevancy on the show. Not only is Carole the realest housewife on the show, but she’s also the most interesting! Unlike many of her cast mates, Carole once had an impressive career as a foreign correspondent journalist who traveled all around the world, covering important topics like the war in Afghanistan and genocide in Cambodia. She also has an interesting tie to the Kennedy family because her late husband, who also happened to be a Polish prince, was Jackie Kennedy’s nephew and thus the cousin of John F. Kennedy Jr. She’s authored three books which have landed on the New York Times Best Seller list and received three Emmy Awards and a Peabody Award. Mostly we just love her because she has the world’s cutest dog named Baby! 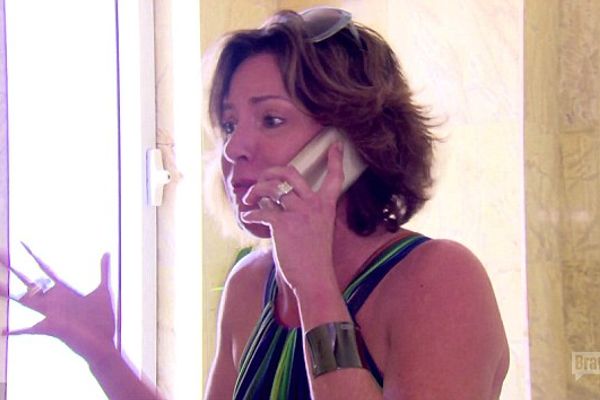