Dancing with the Stars has a hugely dedicated fan base who always want to make sure that the competition is fair and that the best dancers win. But sometimes there are bumps along the road, and the results of the competition are not always what fans think they should be. This list takes a look at the 12 most controversial Mirrorball trophy wins to date:

While there wasn’t much controversy over these two winning the Mirrorball after their memorable freestyle dance to “Save a Horse, Ride a Cowboy,” it was the supposed romantic relationship between them that spurned a lot of fans. Whether the rumors were true or not remains unknown, but the tabloids had a field day and kept these two in the limelight well past their time on the show. 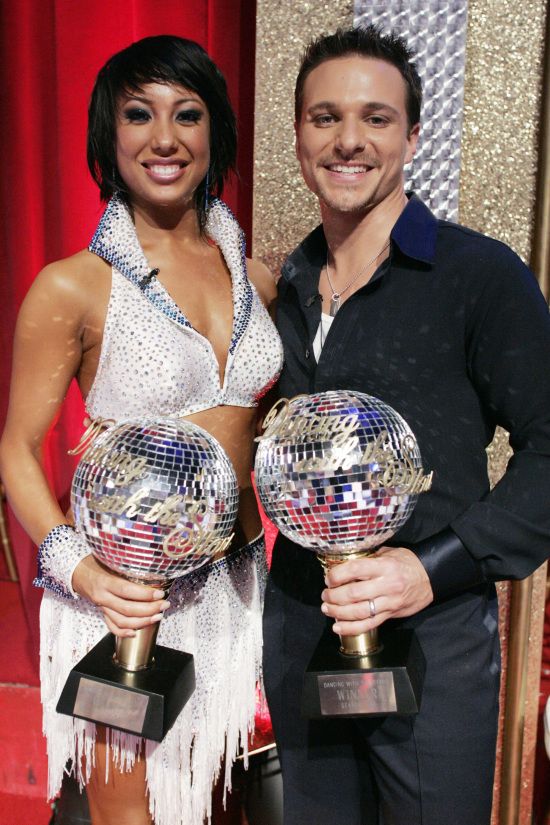 Alfonso Ribeiro’s Mirrorball win with Witney Carson was much protested because of Ribeiro’s previous dance experience. Besides his infamous Carlton dance on The Fresh Prince of Bel Air, the actor was also trained to tap dance by Broadway professionals for “The Tap Dance Kid.” He was called out by OK magazine and responded, “The only dancing I’ve ever done was tap dancing and that was yes, on Broadway, but they taught me how to tap dance on the show. I’ve never taken any dance classes. When people call me a professional dancer that’s actually so incorrect.” But that experience may have just won him the competition at the end of season 19. 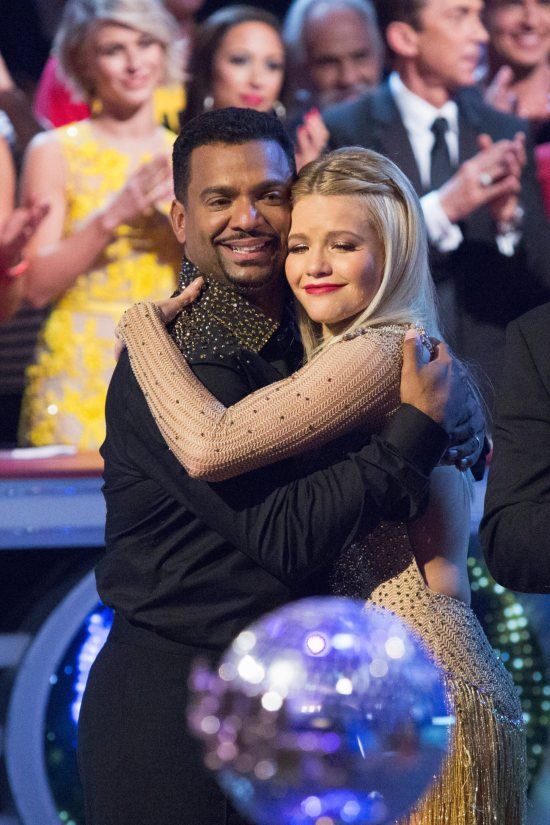 These two won the Mirrorball trophy back in season 5 and created a big stir amongst fans over their supposed off-stage relationship. Romance rumors flew after Helio kissed her on air and split from his fiancé just a few months after the show ended. Coincidentally, Hough also called off her engagement to Zach Wilson around the same time. Julianne denied the relationship allegations. “They said I was a homewrecker, But I’m pretty much the only one on the show who hasn’t hooked up.” 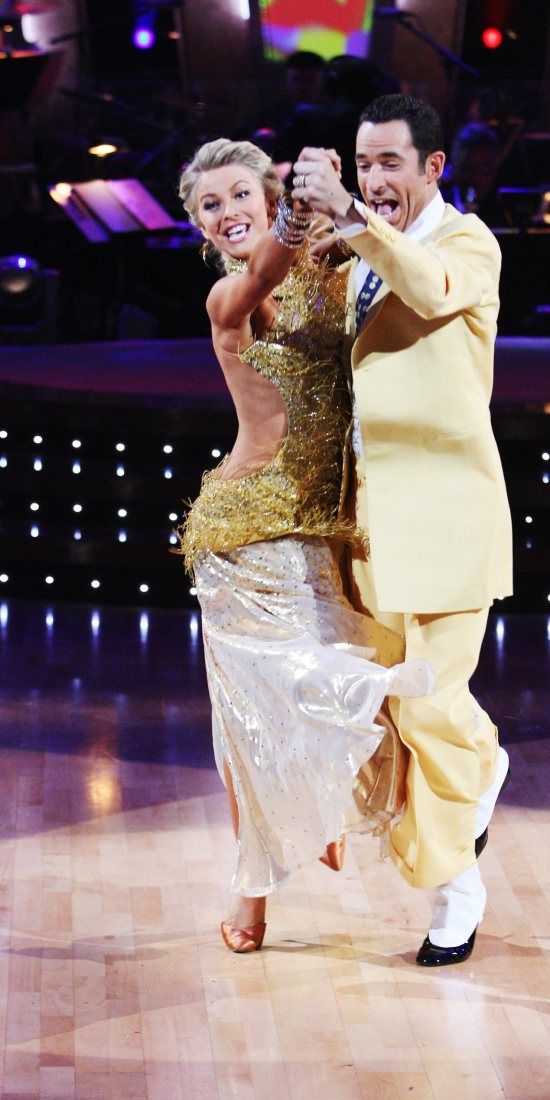 Nyle DiMarco was the first deaf contestant to win America’s Next Top Model and Dancing with the Stars. The difficulty of mastering dance moves in a competition that requires you to find the beat is a challenge for anyone, let alone when you can’t hear the music! But regardless of this contestant’s bravery, many felt that it was his “fan favorite” status that earned him the win and that fellow contestant, Paige VanZant, out-danced DiMarco. Whatever side of the of the argument you’re on, the controversy around this Mirrorball trophy win is certainly a sensitive topic. 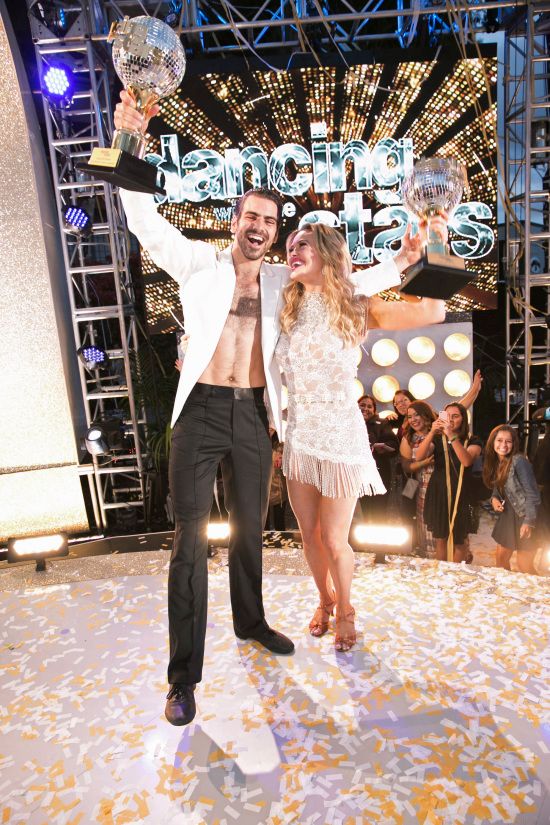 During season 24 of Dancing with the Stars, it was predicted that Normani Kordei would win the competition. She wowed the judges with her dancing skills and had the highest scores, as well as a large fanbase to vote for her each week. On the last night of the competition, the judges even told her that she was “born to win this competition.” In spite of all this, Rashad Jennings managed to win the competition with Chicago Cubs catcher David Ross taking second place and Kordei landing in third, which was unfair since she was clearly the better dancer of the three of them. 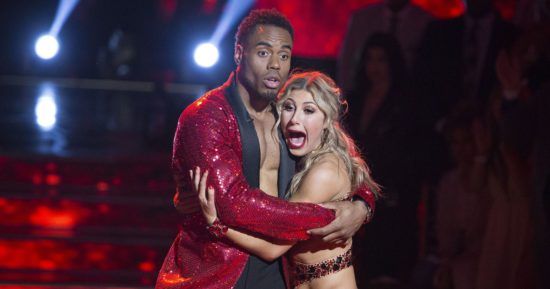 Jordan Fisher took home the Mirrorball trophy in season 25 of Dancing with the Stars, but some felt that he shouldn’t have been allowed to compete in the competition to begin. The big issue that people had was the fact that he had a background in musical theater. Previously, he had performed in Hamilton and Grease, which gave him a serious leg up in the competition. 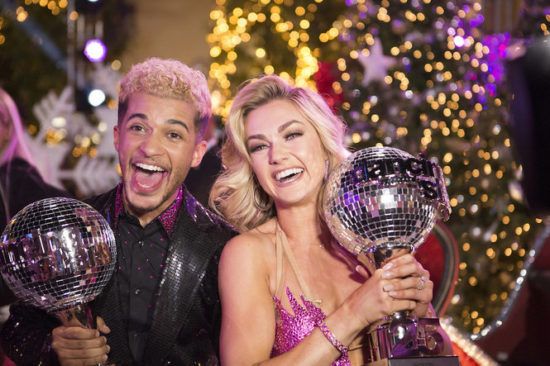 When Kelly Monaco and Alec Mazo took home the Mirrorball trophy during the first season of Dancing with the Stars, there were some viewers who didn’t think she deserved to win. Instead, they believed that Seinfeld actor John O’Hurley was more worthy of the Mirrorball trophy. He was consistently a better dancer on the show, but it appears that Monaco won because her journey as a dancer was more noteworthy. Fans were so upset about her win, however, that they demanded a rematch, which they filmed for the show, and this time O’Hurley was the winner! 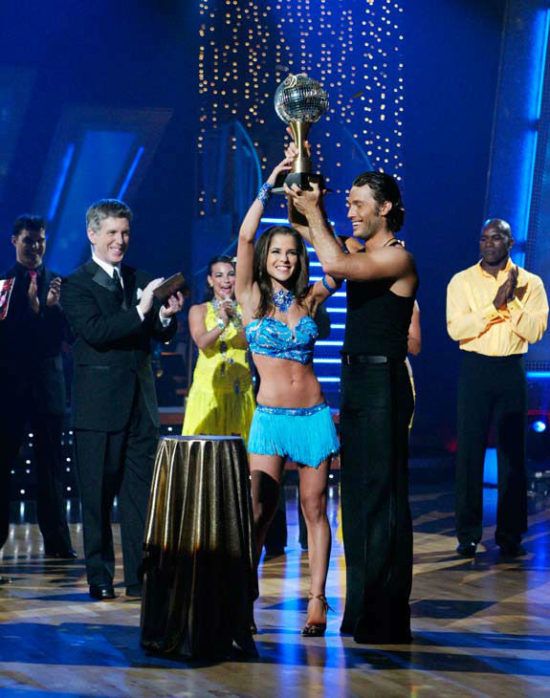 Donald Driver and Peta Murgatroyd won season 14 of Dancing with the Stars and their win was definitely a surprise. For one, no one actually expected him to win. Fans expected runner-up Katherine Jenkins or third-place finisher William Levy to take home the Mirrorball trophy because they had performed well throughout the season and the judges had praised their performances. Driver was definitely the underdog. He was one point away from last place after his performance and perhaps fans felt his journey was more compelling, hence his win. 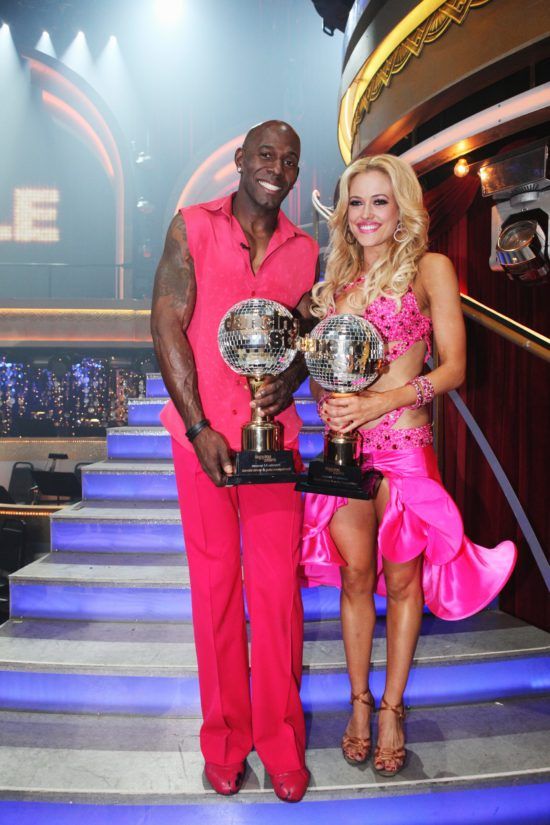 After Meryl Davis and Maksim Chmerkovskiy’s win during season 18, there were some angry viewers who complained that the show was rigged. Several fans alleged that their votes for James Maslow and Peta Murgatroyd were actually being redistributed to Davis and Chmerkovskiy and showed a pictures of this to Rumorfix.com. ABC insisted that there were no voting issues, but fans were still adamant that their votes hadn’t gone to Maslow and Murgatroyd. 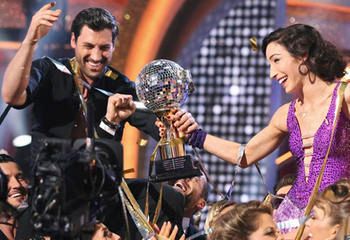 Kellie Pickler and Derek Hough were yet another Mirrorball winning couple rumored to be having an affair. And Kellie was married! The two gushed over one another. Kellie said, “Derek has taught me so much, not just about dancing, but about life,” and Derek commented in return, “I adore [Kellie]. She’s a special, special girl.” Hough, of course, denied the rumors. “I’m not gonna lie. There are some people, or men or husbands or boyfriends, that come on here who are a little bit like, ‘Oooh, you’re doing the rumba with my wife or girlfriend,’ but [Kyle] was completely and amazing and just super comfortable and confident in who he is.” The jury is still out on these two though! 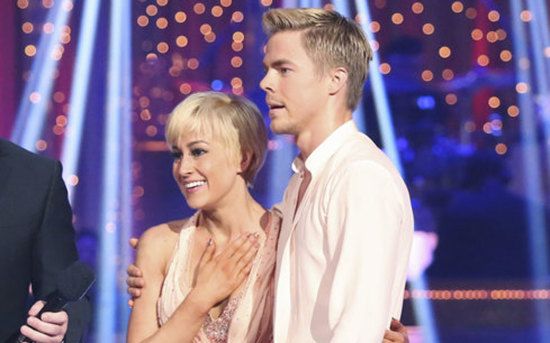 These two were the unlikely winners of the Mirrorball trophy in season 9. Not only did Donny’s sister, Marie, appear on season 5, drawing up her own drama after a fainting spell, but Donny’s time on the show was also riddled with some controversy! In week three, he created quite a stir when he planted a wet one on the lips of judge Bruno Tonioli! Despite this bold move, this was the couple that ultimately took home the win! 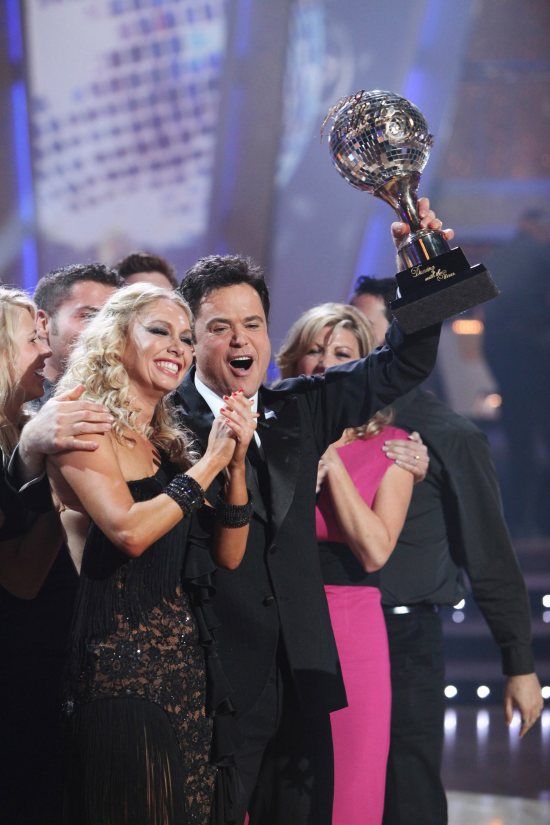 In the first Dancing with the Stars all-star champion competition, Melissa Rycroft and Tony Dovolani won the Mirrorball trophy to many fan’s confusion. It was much anticipated that Olympic gymnast, Shawn Johnson, would be the first contestant to win two Mirrorballs—especially after Johnson and Hough received perfect scores of 10 and a standing ovation, compared to Rycroft and Dovolani’s scores in the 9.5 range. Melissa and Tony were so surprised they won that the network had to censor the expletives! 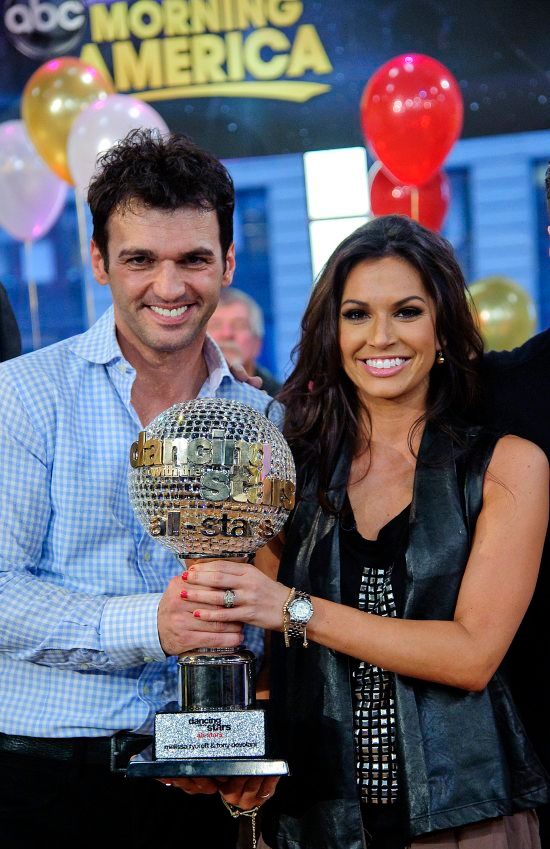 Season 27 of Dancing With the Stars was one very wild ride, and audiences were definitely not prepared for the finale they got. By the last two weeks of competition it was clear season 27 had some of the very best celebrity dancers the show had seen, and also some of the worst, but it all started to go downhill in the second last week and one shocking double elimination. To many, the judges included, Fuller House actor Juan Pablo Di Pace and his pro partner Cheryl Burke were clearly the ones to beat, but then they were eliminated right before the finale which caused major backlash. Heading into the finale, fans picked new favorites with many now expecting Milo Manheim and Witney Carson, Evanna Lynch and Keo Motsepe, or even Alexis Ren and Alan Bersten to win it, but certainly not country radio host Bobby Bones and Sharna Burgess. Instead, the unbelievable happened when Bobby and Sharna were in fact named the winners and the shock from everyone including Sharna herself could not be hidden. As arguably the most shocking Mirrorball win to date, it is now the most controversial with many fans claiming they will no longer watch the show while others are pleading with ABC to change the decision process behind who is named the winner. Either way, no one really knew that reality TV could jump the shark until Bobby Bones was named the winner of season 27. 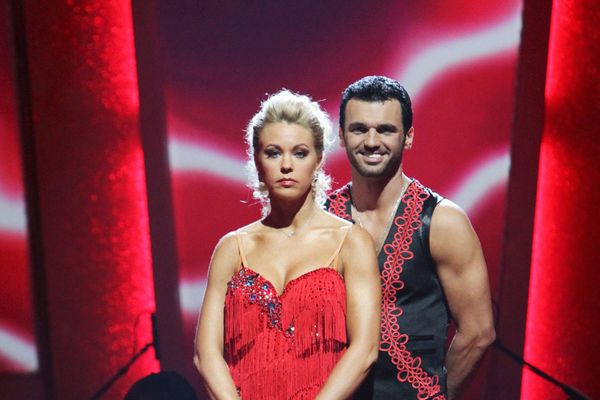