The Bold and the Beautiful (B&B) has never been shy about throwing weddings, much less sabotaging them! The CBS soap has done everything from elaborate, international nuptials to simple living room “I do”s, but the most memorable ones often went off the rails. Let’s take a look at the most memorable B&B weddings in recent years!

Despite being the most recent wedding on this list, Steffy and Finn’s big day is already infamous, thanks to an uninvited guest with a major revelation to share! When Sheila Carter saw that her estranged son, who believed that he had been adopted throughout his life, was getting married, she decided to return to the Forrester estate (after years in exile) and meet her son. Finn was over-the-moon excited to meet his birth mom, but it proved to be short-lived once the rest of the wedding set eyes on her. Sheila was slapped by Steffy and escorted out by Ridge, but the party never recovered.

“Let’s be spontaneous” can be considered fitting last words for any number of bad ideas, but when Steffy said as much to Liam on the bluffs of Aspen, he could barely formulate a reply. Never mind that he had been waiting in that picturesque spot for Hope, who was forced to watch the impulsive ceremony proceed from a stalled gondola nearby.

“Carpe diem”. Oh jeez, what were we just saying about phrases that often spell doom? Wyatt uttered that latin phrase as he surprised Hope with a proposal. After being courted by both Spencer boys, Hope had just given Liam an ultimatum to meet her near the Eiffel Tower if he wanted to be with her. Liam was a no-show, but not for lack of trying. Still, as far as Wyatt and Hope were concerned as they took a “leap of faith” into the water (with their tux and dress), you snooze, you lose!

That wasn’t the only time Wyatt horned in on his half-brother’s romance. Steffy was in love with Liam but after that Spencer inexplicably went MIA, she grabbed the available one! With everyone under the impression that Liam was in Australia with Ivy, Steffy and Wyatt were wed on the beach (with Chaz Bono officiating)! Of course, when the truth came out that Liam had been the victim of an amnesia abduction plot by Wyatt’s mom, Quinn, the romance was pretty much over between Steffy and Wyatt.

The wedding between Eric and Quinn was intimate, to put it delicately — because everyone who was invited boycotted the event! As evidenced when she kept Liam hostage in her fantasy scenario, Quinn has done some pretty dubious things in her life. The show of unity protesting the wedding even convinced Quinn that this might be a mistake, pleading “don’t marry me” to Eric. But the actions of Eric’s family and friends reinforced the groom’s position, and he was convinced that Quinn had changed her ways. To his credit, they had a few pretty solid years!

In 2014, Bill and Brooke were about to wed on the beach in Dubai, with no one else present but a witness and officiant. That is, until Ridge showed up with proof that Bill had slept with Quinn, and then socked the groom and took Brooke away by helicopter. As impulsive and romantic as it was, Ridge’s plan went awry moments later when Bill ordered the helicopter’s pilot, Justin Barber, to eject Ridge into the Persian Gulf.

Ridge clearly took some notes from Nick Marone, who sabotaged his nuptials to Brooke years earlier. Seconds before Logan and Ridge were declared husband and wife, Marone, who was married to Brooke’s daughter at the time, threw his mother-in-law over his shoulder and ran to an upstairs bedroom of the Forrester house. Bridget confirmed that her relationship with Nick was over, and that they belonged together. The wedding was off!

What B&B fan could forget that Ridge and Taylor were one word away from husband and wife, when Brooke rode in on a horse! When Brooke realized that Steffy had lured her out of the picture so that Ridge would follow through with marrying Taylor, she rode a horse all the way to the ceremony and crashed the party in rare style! At the end of the day, it was Ridge and Brooke riding away on horseback together.

Although Liam and Hope are happily married (for now), their previous wedding hit a serious snag when Wyatt had to interrupt the ceremony. Burdened by the truth that Bill had fabricated a scenario to make it appear as though he and Steffy were still an item, Wyatt called a “time-out”, took his brother aside and told him the truth. Bill was furious with Wyatt for spilling the tea, and Hope suspended the wedding.

Ridge and Brooke eventually made it down the aisle together, but it took a couple of tries. When a love triangle emerged between Ridge, Brooke and her sister Katie, it became unclear whether Ridge’s feelings for Katie were enough to abandon his wedding plans. Finally, on the day of the nuptials, Katie — who previously had a heart transplant —pretended to faint and disrupted the ceremony. After that, Ridge got engaged to Katie, and Brooke went with her ex’s rival, Bill.

Thomas isn’t the only groom on this list who was relieved when someone interrupted his wedding ceremony, as long as that someone was Hope. Even though he was marrying Zoe, Thomas had never stopped obsessing about Logan. As it turns out, his little secret was public knowledge, and when Hope descended the staircase in a wedding gown of her own, he chose her over his bride-to-be. But it was all a ruse to uncover Thomas’s true feelings. Hope shoved him away, and Zoe stormed out of his life.

Who could forget the rivalry that began when Pam, who thought Eric belonged with her sister Stephanie, tried to sabotage Donna’s relationship with her Honey Bear? When Donna and Eric made plans to get married, Pam orchestrated a series of pranks that involved turning Donna’s hair and teeth green. As Stephanie’s sister had quit taking her anti-psychotic medication, the pranks escalated into legitimate crimes. Pam trapped Donna in a tanning bed and threatened to kill her, using her Doberman as an intimidation tactic. For a moment, viewers were fooled into thinking that Pam drenched Donna with a hose as she walked down the aisle — alas, that time, it was just Pam’s fantasy at play! 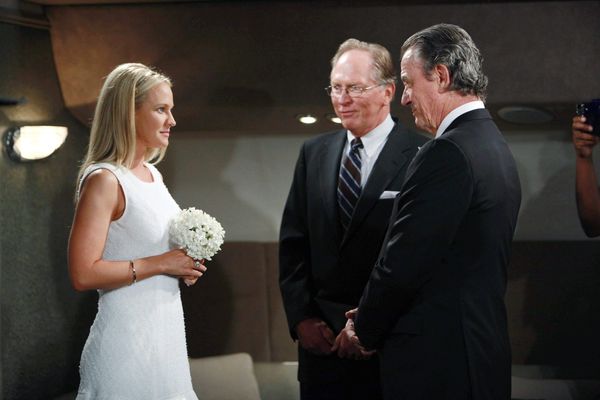