Olivia Jade Giannulli is no stranger to the spotlight as the daughter of Full House actress Lori Loughlin and designer Mossimo Giannulli, but in March of 2019 things changed when she was swept up in the Operation Varsity Blues college admissions scandal which revealed that her famous parents paid to get her into USC. Since then, Olivia Jade’s name has been everywhere, and now more than ever people are interested in Lori Loighlin’s daughter. Here is everything to know about Olivia Jade:

Most didn’t even connect Olivia Jade Giannulli with her famous parents because she is known simply as Olivia Jade thanks to her very own social media stardom. At only 14 years old she started her own YouTube channel and quickly found success. As of March 2019 she had nearly 2 million subscribers to her channel and nearly 1.5 million Instagram followers for her brand which focuses on beauty and fashion. Although she has disabled commenting on many of her posts, she has not deleted her social media profiles.

When the news of the scandal broke, it was reported that Lori Loughlin and her husband had paid for both of their daughters to get into to USC, but for some reason the only one being mentioned is Olivia. Olivia’s older sister is Isabella Rose Giannulli has actually acted alongside her famous mother in a few Hallmark Channel movies including Every Christmas Has a Story and Homegrown Christmas. Isabella reportedly wanted to pursue a career as an actress, but her parents wanted her to get a college education first, which was the same for Olivia who wasn’t thrilled about having to go to college. “I’m so happy they made me go. That sounds so terrible. They didn’t make me. My sister [Bella] goes to the same school and we’re pretty much inseparable. So it was nice following in her footsteps a little bit,” Olivia said of going to USC a year after her sister started there. 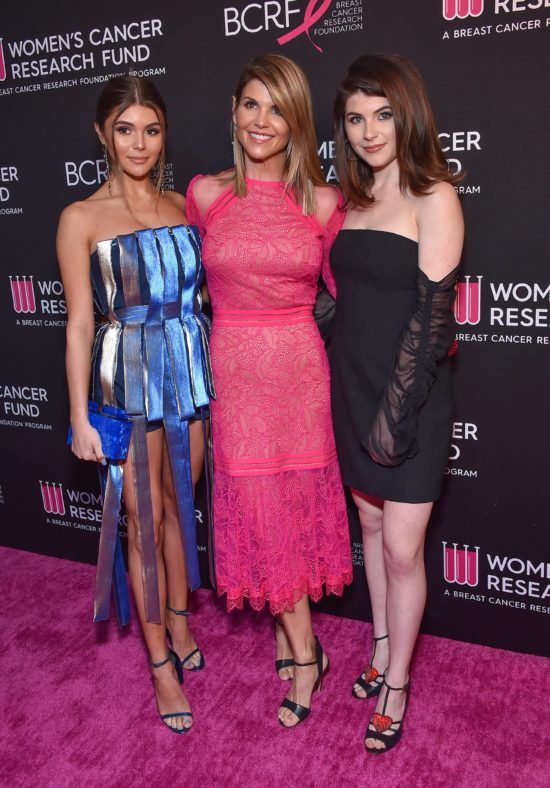 Following the breaking of the scandal, controversial statements that Olivia had previously made concerning school came to light all over again. Throughout high school, Olivia made many comments about not loving school and wanting to focus instead on her brand and becoming a social media influencer. Things got worse when she announced to fans and followers that she would be going to USC and made controversial comments about only going to party. “I don’t know how much of school I’m gonna attend,” she said in her video, referring to her busy schedule. “But I’m gonna go in and talk to my deans and everyone, and hope that I can try and balance it all. But I do want the experience of like game days, partying…I don’t really care about school, as you guys all know.” After being called out for her “ignorant” comments she issued an apology. “I said something super ignorant and stupid, basically. And it totally came across that I’m ungrateful for college—I’m going to a really nice school. And it just kind of made it seem like I don’t care, I just want to brush it off,” she explained. “I’m just gonna be successful at YouTube and not have to worry about school. I watch it back and…I’m really disappointed in myself.” She continued, “I’m not trying to come out here and defend myself or anything, I just genuinely want to say I’m sorry to anyone I offended by saying that. A lot of people like to attack me for the way I’ve grown up because it’s really different from a lot of people, and so anything I say that’s even remotely ignorant or bratty or something that I genuinely don’t mean it gets so much backlash. I feel really, really bad that I say stuff like that because I don’t mean to sound that way.” 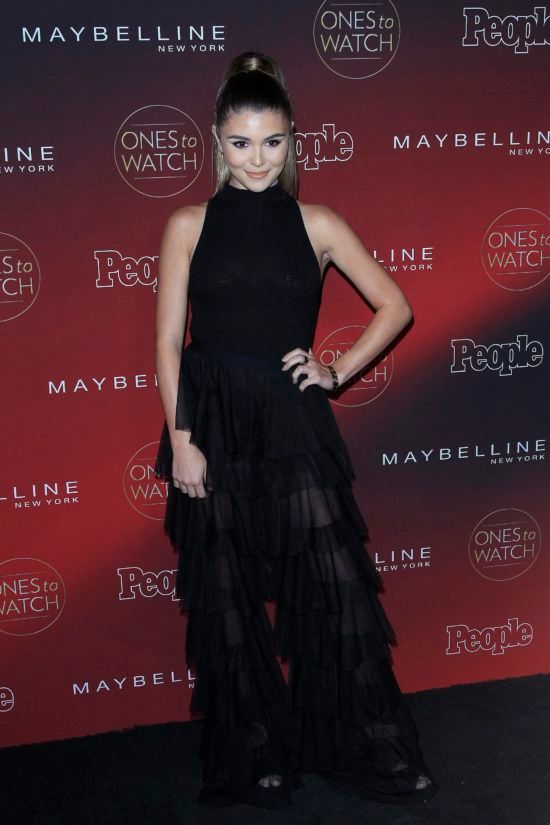 9. She Was On a USC Official’s Yacht

There is no denying that Olivia Jade has always lived an extravagant lifestyle, and at the time the news broke that her parents had been charged in the Operation Varsity Blues scam, she was actually aboard a USC official’s yacht. It was reported that Olivia Jade was aboard billionaire Rick Caruso’s boat in the Bahamas on spring break because Olivia is good friends with Rick’s daughter Gianna Caruso. “My daughter and a group of students left for spring break prior to the government’s announcement yesterday,” Rick Caruso said at the time. “Once we became aware of the investigation, the young woman decided it would be in her best interests to return home.” The billionaire real estate mogul serves as Chair of the Board of Trustees and Executive Committee of the University of Southern California.

One of the unanswered questions that has prevailed as the case has progressed is whether or not the children knew about what their parents were doing to get them into prestigious colleges and whether or not they knew it was illegal. In relevant court documents made available to the public on the FBI’s website, it seems that Olivia was in the loop on the emails sent between her mother, Lori Loughlin, and the scam’s ringleader William “Rick” Singer. In the documents it is revealed that Loughlin included Olivia on an email with Singer asking for help filling out the USC application because Olivia hadn’t submitted her application “and is confused on how to do so.” One of Singer’s employees filled out Olivia’s application for her, but is unclear whether she knew that she was partaking in something illegal.

Despite the hit that her reputation and career as a social media influencer took when the scandal was revealed, Olivia Jade is reportedly not ready to give up on her personal brand. A report from PEOPLE stated that, “She is very angry with her parents. She just wants to figure out how she can rebuild her brand.” The source continued that she only went to USC because that is what her parents wanted, but her true passion is her business as a social media influencer. “Olivia had her own life and business. She was always very driven and worked very hard to achieve what she had. This was her passion. She was honest about that she didn’t really care about school. But her business, she was always very serious about. She most certainly will find a way to start over again. She isn’t someone that gives up easily,” the source explained.

6. Relationship With Her Parents

Olivia, along with her sister Bella, often attended events with her famous mother, and they always seemed like an idyllic family unit. “It was great when they were little,” Loughlin said of family trips skiing in Colorado during the BUILD Series interview. “I loved Sunday afternoons so much…because we’d get up in the morning and we’d stay in our pajamas and they’d just play together by the hour and I would give them lunch and they’d go back and play. It was just so nice, we didn’t do a lot of playdates; it was just our little group. It was lovely.” Now it seems things have changed with reports that Olivia is “distraught and embarrassed,” with a report adding, “She would have never gone along with it if she thought this would happen. Her thing is that she trusted her parents.”

After the scandal broke and it was revealed that Olivia is angry with her parents, it seems she went to stay with her boyfriend Jackson Guthy who was then put in the spotlight. Guthy is rarely seen on Olivia’s social media but she confirmed the relationship on her VLOG titled “NYC with my boyfriend and bffs.” Guthy is a 23-year-old singer-songwriter who also has wealthy parents. Makeup company businesswoman Victoria Jackson is his mother while Bill Guthy who leads the billion-dollar marketing firm called Guthy-Renker is his father.

After starting her YouTube channel and subsequent Instagram account at a young age, by 19 Olivia Jade had already procured brand partnerships with some very lucrative and big companies. In December 2019, she released her own highlight palette with Sephora just one month after debuting a clothing collection through Princess Polly, she had deals with companies like Estee Lauder and Marc Jacobs,  and Amazon Prime furnished Olivia’s dorm room at USC through a paid endorsement deal. After her involvement in the scandal went viral, Sephora cut ties with Olivia, followed by Estee Lauder while the page for her Princess Polly line went blank. Unfortunately, at the same time the scandal came to light, Olivia was going through trademark issues after her requests for “Olivia Jade” and “Olivia Jade Beauty” were rejected because of poor punctuation and vague language. In early April, the trademarks were approved by the U.S. Patent & Trademark office after she corrected the issues.

In the weeks following the scandal it was reported that Olivia and her sister Bella had decided to leave USC, but as it turns out it isn’t as simple as that. The school is not allowing the girls, or any other students involved in the scandal, to withdraw because their cases are under review. “USC has placed holds on the accounts of students who may be associated with the alleged admissions scheme,” the college said. “This prevents the students from registering for classes (until they have agreed to participate in the review of their case), withdrawing from the university, or acquiring transcripts while their cases are under review. Among many factors investigators could consider in reviewing each case are any developments in the criminal cases, including plea deals by parents. Following these case-by-case reviews, we will take the proper action related to each student’s status, up to revoking admission or expulsion.” 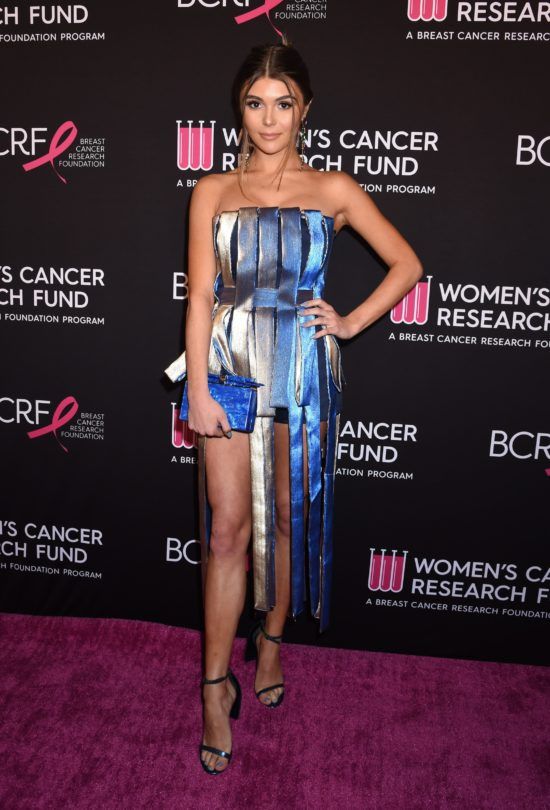 In the days and weeks since it was revealed that Olivia’s parents had paid for her way into USC, many comments made by the social media star and her famous mother have been scrutinized even further. Loughlin often gushed about the importance of hard work and her daughters making their own way. If that wasn’t bad enough, in an interview right before the scandal broke, Olivia talked about her dad “faking” his way through college. “He didn’t come from a lot so it’s cool to see that he built it all himself,” she said. “He, like, built his whole entire brand and he wasn’t actually, like, I don’t know if I’m supposed to say this, ever enrolled in college. But he, like, faked his way through it and then he started his whole business with tuition money that his parents thought was going to college. That’s, like, such a different time. I don’t know if I was supposed to say that, but it’s okay.” 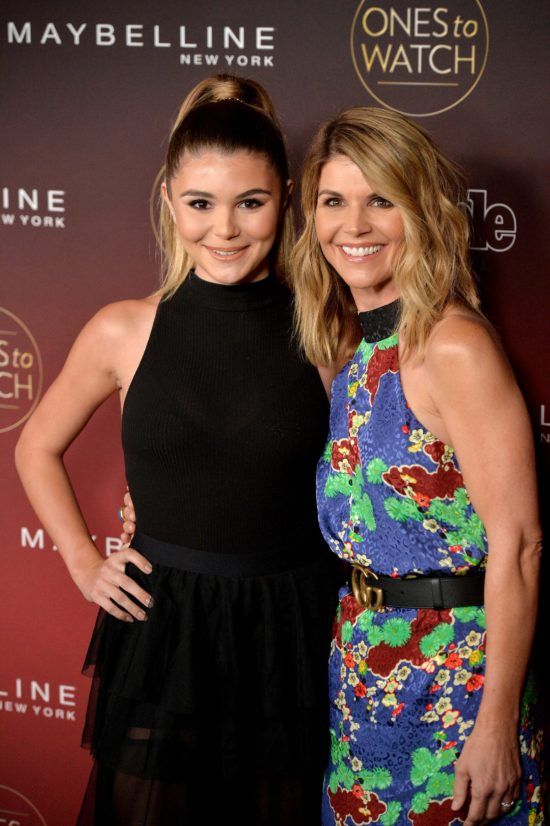 As of right now, it isn’t clear what kind of consequences that Loughlin, Giannulli and the other parents who have not reached plea deals will get, and it is even more uncertain what will happen to Olivia Jade and her sister. With their fate at USC still under investigation, there is a slight possibility that they might be facing jail time, if it can be proven that they knew about the illegal activity. “The more time that passes, however, the more likely it is that the prosecutor will bring pressure by seeking to interview the children as part of the evidence,” attorney William Moran told Refinery29. “If Olivia Jade knew and participated, she could face criminal liability. As long as charges against the parents are pending, the children are still vulnerable.” 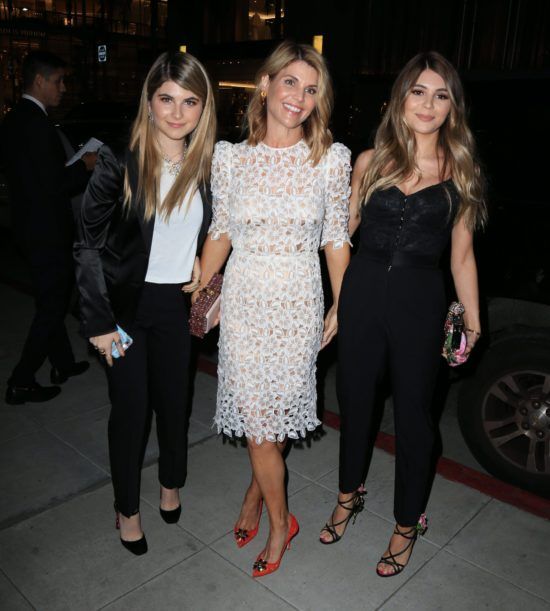