Sienna Miller took center stage in the Jake Scott-directed film American Woman which tells the story of a scattered mother whose daughter goes missing in a grim Pensylvania town. Although Miller’s performance and the family dynamics of this film are applaudable and relatable, the plot seems to lack focus on some of the central twists, which leaves the audience with more questions than answers.

The film begins by introducing the Callahan family who is the quintessential picture of working-class, small-town America. Thirty-something supermarket cashier Deb Callahan (Miller) is introduced as a somewhat reckless mother to a 16-year old teen mom, Bridget, who has already broken things off with her toddler’s father. Clearly, destined-to-fail relationships seem to run in the family because Deb is introduced having an affair with a married man, which is only the first of her destructive dating decisions throughout the film. Deb’s entire existence is a time bomb waiting to be triggered, which happens when her daughter Bridget mysteriously goes missing and Deb falls down a drunken downward spiral.

While Bridget’s unexplained disappearance is a focus of the film for the beginning portion, the story seems to dwell on Deb’s reaction to the disappearance rather than the event itself. The plot proceeds to place a full focus on Deb and her relationship missteps, all while Brigitte’s disappearance is an underlying, festering plot that never gets the full attention it deserves. The entire film we question, “who did it?” but the film doesn’t ever seem to directly address this, and instead, focuses on Deb’s transition in becoming a nurturing mother in Bridget’s absence to her grandson.

Although American Woman lacks focus on the missing-persons underplot, we still give major kudos to Miller in her role as Deb. She proves her talent as an actress by flawlessly portraying the complex and multi-dimensional character of Deb who completely sheds her previous self and shifts into a woman, and mother, of resilience, strength, and independence. Watching Deb mature and make sound life decisions is a huge part of the appeal of the film and Miller takes on this character who excels in the face of adversity with stride.

Another facet of this film that’s worthy of note is Deb’s foil character, her sister Katherine (Christina Hendricks) who lives directly across the street. Katherine is the version of an “American woman” that Deb could have been minus a few missteps. She works a solid job and has a doting husband who cares deeply for their two sons and would do anything for his family, including cleaning up the messes Deb makes along the way. Although the relationship between Deb and her family is rocky at first, throughout the course of the film we see intolerance and too-close-for-comfort family relations turn to pure, unconditional love and care. The dynamic between Deb and her family is a huge point of applause on Scott’s part. He paints a picture of a realistic family with trials and tribulations along the way but at the end of the day, they always have each other’s backs.

Overall, despite the screenplay’s focus on Deb’s romantic missteps rather than her daughter’s disappearance, Deb’s resilience through life’s unexpected turns makes American Woman worth the watch. The honest depictions of family dynamics and Miller’s stellar, raw performance allows American Woman to shine, we simply wish that some of the loose ends and twists had more palpable explanations along the way. 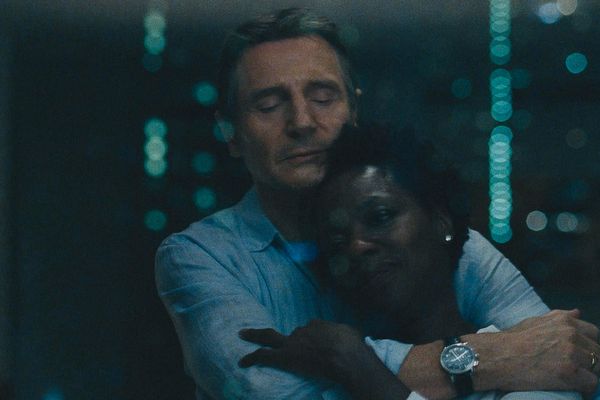