Friends remains one of the most popular sitcoms of all time, even 13 years after it went off the air. The show started back in 1994 and ran for 10 seasons. Viewers fell in love with the incredible cast who made up the famous Friends gang as the show spawned some of the most iconic television couples ever like Ross and Rachel and Monica and Chandler. When two main characters hook up it can either make or break a show, but this coupling definitely made the show and we have all the proof! Here are some of the best and most memorable moments between Monica and Chandler!

In the episode titled “The One with the Flashback” Monica is upset because Phoebe moved out of the apartment due to her obsessive behavior. She begins to feel rejected and asks Chandler if this is why she can’t find a boyfriend. He’s quick to step in and comfort her with the sweetest words. He gave her a huge and said to her: “You are one of my favorite people. And the most beautiful woman I’ve ever known in real life.” This scene feels a little bit like foreshadowing to their relationship!

In the beginning of the series, Monica and Chandler didn’t get a lot of funny scenes together, so this one is special! Back in season 4, before they started dating, Chandler stepped up to the plate and peed on Monica after she gets stung by a jellyfish. This just goes to show how close these two are and that Chandler has unknowingly always been there for her — no matter what it entails!

Ross is welcoming his first child, Ben, with his ex-wife Carol and Monica becomes extremely aware of the fact that her clock is ticking when it comes to getting married and having children. In an effort to reassure her, Chandler offers to make a pact with her that if the two are still single by the time they are 40, they’ll get married. Of course, the idea that she’d still be single at that age ends up freaking Monica out even more! Luckily, neither one had to wait that long and they didn’t need a special pact to bring them together.

The friends all fly to London for Ross’ wedding to Emily, but it was Monica and Chandler’s surprising hook up that ended up stealing the show! Chandler is upset after his toast isn’t well received, and Monica gets mistaken for being Ross’ mother, so the two end up drunkenly consoling each other. One thing leads to another and the next morning they wake up in bed together! The whole thing is super cute as they both agree to look at each other naked at the same time and Chandler being Chandler is wearing matching top and bottom button up flannel pyjamas. Even though it was intended to be a secret fling, their hook up continues after they return home. Eventually their meaningless sex turns into a full fledged romance.

8. The One With Monica and Chandler’s Wedding (season 7, episode 23)

This no doubt was one of their best moments! When Monica and Chandler finally walked down the aisle and exchanged vows. This was such a big moment on the show that it was spread over two episodes with so many hilarious moments leading up to their walk down the aisle.

7. Monica and Chandler End Up Together in an Alternate Reality (season 6, episode 16)

Season 6 has a two part episode sequence outlining what would have happened if each of them had taken a different path in life. For Rachel it was if she hadn’t walked out on her wedding to Barry, Ross was if he hadn’t divorced Carol, if Monica hadn’t lost the weight and if Chandler wrote comics for The New Yorker. Even though Monica insists she and Chandler wouldn’t have ended up together if she was still fat, this alternate reality proves otherwise. It seems these Friends can’t fight fate and Monica and Chandler were fated to be together. In the episode, almost the exact same scenario occurs when a one night stand between them turns into a new relationship when they begin to develop real feelings.

After they finally tied the knot, Monica became focused on starting a family. She was so driven to have kids until the unthinkable happened. Chandler and Monica learned they were incompatible which is why they were having trouble conceiving a child. They explored other options like IVF via a sperm donor or surrogacy, but Monica quickly realized she didn’t want to get pregnant with a sperm donor because if she couldn’t carry Chandler’s baby, she didn’t want to get pregnant at all. This led them to the decision to adopt!

Monica is forced to give up her perfect wedding dress when another shopper blackmails her into giving up her dress by booking the Swing Kings on the date of their wedding. Instead of giving up the dress, Monica tries to convince Chandler that the Swing Kings aren’t good, but then she finds out why he wants that particular band so much. He said: “It’s just while Monica and I were dancing to them…it was the first time I knew that you were the woman I wanted to dance all my dances with.” How sweet!

4. The One With All The Thanksgivings (season 5, episode 8)

In this episode, Monica tells the story of when Chandler called her fat. Ironically this is what made her lose all the weight, but that wasn’t the whole story. The group also learns that when Chandler returned the following year after she’s lost all the weight, Monica was still upset. In an attempt to humiliate him, she tried to seduce him by rubbing vegetables and various objects all over her, but accidentally dropped a knife and cut off his pinky toe! Chandler is upset he lost a toe for calling Monica fat and storms away. In order to cheer him up and get his forgiveness, Monica puts a turkey on her heard, knocks on his door and dances in his doorway with a huge turkey on her head. Unable to stay mad at her, Chandler inadvertently tells her he loves her for the first time ever!

3. When Monica and Chandler Decide to Live Together (season 6, episode 1)

After a crazy trip to Vegas where Monica and Chandler almost got married, Chandler proposes he unpacks his bags at Monica’s apartment and suggests the two take their relationship to the next level by moving in together! This was a huge moment in their relationship not only because the two of them were taking the next step, but also because it would change up the dynamic in their group. Rachel was then forced to move out and Joey had to find a new roommate.

There wasn’t a dry eye in the house when this scene was filmed. Monica surprises Chandler after he’s convinced he screwed up their relationship for good. He walks into an apartment filled with candles and Monica gets down on one knee to propose, but when she can’t get through it, Chandler gets down on one knee and finishes it off. He said: “You make me happier than I ever thought I could be. If you let me I will spend the rest of my life trying to make you feel the same way,” and pulled out a ring he’d been planning to use all along!

The season finale tied up a lot of loose ends, including what Chandler and Monica’s family life would look like. They finally got their baby after pregnant teen, Erica, chooses them to be her child’s adoptive parents. In the final episode, she goes into labor and gives birth to a baby boy which is super exciting, but then something even more exciting happens! Chandler and Monica find out Erica is pregnant with twins and that they are actually getting two babies, not one! They made the decision to adopt them both and finish off the series as a happy family of four. 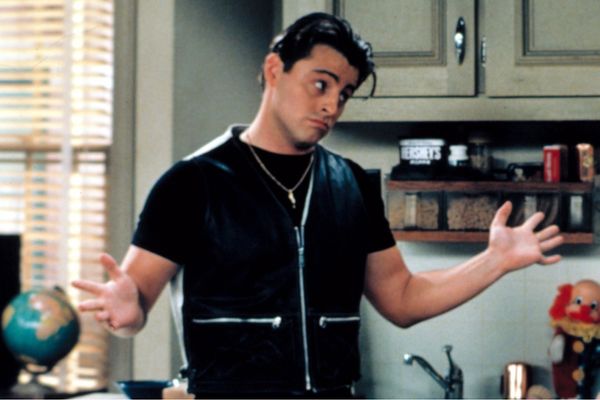