When you think of Rachel Green, it might be her romance with Ross Geller that you remember first and foremost, but the character played by Jennifer Aniston had her fair share of funny moments on the beloved long-running show. Transforming herself throughout the years from a spoiled country club runaway bride to a successful working single mom, Rachel faced each step with determination and a heck of a lot of humor. Check out the list below and enjoy 10 of Rachel’s funniest moments on Friends.

Attending your ex-fiancé’s wedding would be bad enough for most people. Attending your ex-best-friend’s wedding who happens to be marrying your ex-fiancé because they were in fact having an affair while you were engaged…just totally brutal. Top that all off with being forced to wear one of the pinkest, puffiest, ugliest Pepto Bismal Little Bo-Peep bridesmaids dresses ever, then accidentally walking down the aisle with the back of that hideous dress tucked into your fully exposed undies, and you have one of Rachel Green’s most-cringe worthy and funniest moments ever.

Always a bridesmaid, never a bride. Not quite the case in Rachel’s life, especially when you ditch the whole wedding and husband thing and just go for the dress. When Monica and Phoebe cheer themselves up by popping on wedding dresses (Monica wearing her future sister-in-law Emily’s dress and super-pregnant Phoebe’s dress coming from a shop called “It’s Not Too Late”), Rachel is ready to get in on the fun. Unfortunately for her, that just happens to be the moment when Joshua knocks on the door (ya know, the guy that Rachel tried to convince to marry her even though they’d barely started dating? Yeah, him!). It was also when Rachel decided to open the door, not knowing the visitor is Joshua, clad in the wedding dress, with an enthusiastic greeting of, “I dooooooo!” And that was the end of their relationship as well as the cause of a heck of a lot of laughs.

The bridesmaid’s dress may have been hideous. The wedding dress may have been misguided (or totally on point, depending on how you look at it). But the cheerleading outfit, was…well, it was seriously funny. When Rachel is first trying to woo Joshua nothing seems to be working, so she decides to try the thing that has never failed her before. Her cheerleading uniform. Slipping it on during a party, while sporting a fat-lip, she cheers and cartwheels and crashes and oh geez, it’s so jaw-dropping awkward  and hilarious.

7. Rachel in the Gold Bikini

If you thought the bridesmaid dress, the wedding dress, and the cheerleading uniform were memorable moments, then how about Rachel in the gold bikini? No, not Princess Leia in the gold bikini, we’re talking about Rachel in the gold bikini. When Ross’s secret fantasy gets out, the entire Friends’ gang soon knows that he’s always fantasized about Princess Leia in the gold Bikini from the epic Star Wars scene. Rachel, indulging her boyfriend, dresses up in the iconic outfit, giant hair buns, singing the music, dramatic entrance, and all. That would be funny enough, but when Chandler’s creepy influence gets in the way (i.e. has Ross picturing his own mom in place of Rachel) things are just too gross for Ross and too funny for the audience.

Ross asks Rachel to babysit his monkey Marcel, but when she goes to take out the garbage, she forgets to close the door of the apartment behind her. When she gets back to the apartment she realizes that Marcel snuck out the door! When Ross gets back he’s planning on telling Rachel that he has feelings for her but his plan gets sidetracked because he’s furious with Rachel for losing Marcel. He’s even more mad that she called Animal Control because Marcel is an illegal exotic pet. Whoops. When the Animal Control personnel shows up, she ends up being an old acquaintance of Monica and Rachel, but it turns out she didn’t exactly like the prom queen Rachel in high school and decides to confiscate Marcel instead of helping them out. In the search for Marcel, Luisa mistakenly shoots Pheobe in the butt with a tranquiler dart. But when she finally catches Marcel and is about to haul him off, Rachel saves the day by blackmailing Luisa about shooting a human being with the dart — and the monkey is returned to Ross!

Childhood pets can be hard to replace and trying to fill the empty spot in your life (and heart) with a new pet in your adult years can be exciting and heartwarming. Rachel picks up a new pet when she comes across one that’s up for adoption and just like the beloved kitty her grandmother had when Rachel was a child. But the thing is, it’s no regular cat. It’s a hairless “purebred, show-quality Sphinx cat.” And the new one Rachel adopts (for a whopping $1,000) is nothing like the cat she once knew. This cat is mean and scratchy and freaks everyone out. “I swear it’s saying, “RACHEL!”

When Rachel wants to pitch in for Thanksgiving dinner, Chef Monica obliges by letting her friend make the dessert. Rachel opts for a traditional trifle. But when the pages of the cookbook stick together, she ends up making half of a trifle and half of a Shepard’s Pie. Ew! Ew! Ew! Although her friends try to hide her mistake and clear their plates in whatever way that they can, Rachel discovers her hilarious mistake in the end. “I WASN’T SUPPOSED TO PUT MEAT IN THE TRIFLE!” But Joey doesn’t seem to mind. In fact, he likes it. “What’s not to like? Custard? Good! Jam? Good. Meat? Gooood!”

When Ross admits to Joey that it’s been a while since he’s seen any physical action, Joey gives Ross a key to success. A magic story that always works in the game of seduction. When the friends find out that there’s a videotape showing the night that Rachel and Ross hooked up (and Rachel ended up preggo), they decide to watch the beginning to see who came on to whom. Soon, we see Rachel lean over to Ross and say, “Years ago, when I was backpacking across western Europe.” Do you recall the rest? “I was just outside Barcelona, hiking in the foothills of mount Tibidabo. I was at the end of this path, and I came to a clearing, and there was a lake, very secluded, and there were tall trees all around. It was dead silent. Gorgeous. And across the lake I saw, a beautiful woman, bathing herself. She was crying…” She may have been crying, but fans were definitely laughing!

2. When She Leaves Ross the Drunken Message

Moving on isn’t always easy. Finding some sort of closure can be the key to doing just that. While on a date, Rachel has her fair share of wine and gives her companion an earful when it comes to her, Ross, Ross’s girlfriend Julie, and, um, the cat their getting together. Her date suggests closure, and not one to wait, Rachel grabs a fellow diner’s phone and leaves the message that will change everything. “And that, my friend, is what they call closure.” However, it wasn’t closure they found. It was more like the beginning. And it was a heck of a lot of fun to watch!

The very first glimpse fans got of Rachel had her wearing another of her epic outfits. Right from the start, she swept in and caught everyone’s attention. This time, she was wearing another wedding dress, soaked to the bone, and absolutely frantic after taking off on her wedding day. Runaway bride Rachel was how she first stepped onto the show’s stage and it certainly set the tone for her willingness to go all out for a laugh, or rather, a whole heck of a lot of laughs. Rachel: “I know that you and I kinda drifted apart, but you’re the only person I knew who lived here in the city.” Monica: “Who wasn’t invited to the wedding?” Rachel: “Oh, I was kinda hoping that wouldn’t be an issue.” No issue, just laughs! 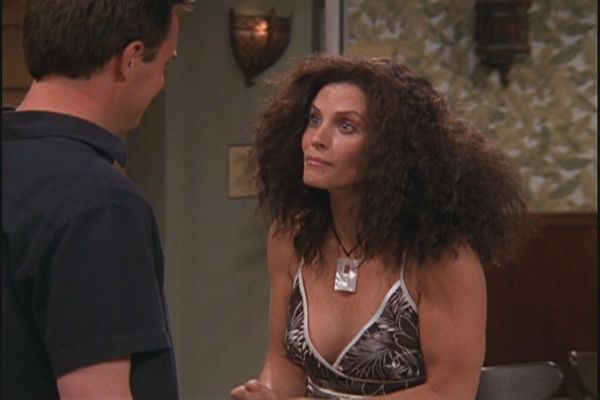