In the land of soap operas, marriage is a constant. While some couples manage to make it work, there are so many others that end up falling apart extraordinarily quickly. Follow along as we take a look at the shortest soap opera marriages from Young and the Restless, Bold and the Beautiful, Days of Our Lives and General Hospital:

Affectionately referred to as Kola by the Internet, this super couple seemed well on its way towards a “happily ever after.” Sadly, after Kyle and Lola said, “I do” in August 2019, it only took about six months to realize they he didn’t want to after all, and the two split up in February 2020.

When Nick Fallon was released on parole in 2012, everyone in Salem was a bit weary on whether or not the ex-convict, who was a little unstable, had reformed. He seemed like he had and Nick caught the eye of Gabi Hernandez. She was pregnant with Will Horton’s son at the time, and Nick took her under his wing. She thought she had found her happily ever after. The two got married in March of 2013, but the marriage was annulled about five months when it had turned out Nick wasn’t as perfect as he was making himself out to be.

A very unlikely couple, but Anthony Zacchara was quite smitten with Tracy Quartermaine back in 2011. So much so, he pursued her with full force, and even though she had ‘eyes’ for Luke Spencer, he ended up kidnapping her, and the two got married in early 2012. Tracy refused to consummate the marriage and as the months progressed, she plotted to kill Anthony to simply get out of the union. Five months later, someone else beat Tracy to it as she found her husband had passed away near the Quartermaine’s boathouse.

After being in love for years, Bill and Brooke finally tied the knot in May 2017. On her wedding day, Ridge tried to get her to change her mind, but he had betrayed her by kissing Quinn, so she chose Bill. But Bill’s obsession with building his skyscraper, aptly named Skye, ultimately tore them apart. When Brooke found out Bill had blown up the Spectra Fashions building, with Sally and Liam inside, she was done. Brooke and Bill were only married for four short months before she broke it off with him.

Who did Kyle leave Lola for? Well, his ex-wife, the same woman he originally left to pursue Lola? Confused yet? Kyle probably holds the record for the shortest two consecutive marriages in the shortest amount of time. He was married to Summer from March t0 June in 2019, then married Lola in August that year, only to spit up months later to head back Summer.

Jack’s return to the land of Salem was explosive in early 2019, but his reunion with Jenn took some time as he could not remember who he was. He got manipulated by Eve, and the two ended up getting married; however, much like their first wedding, the relationship lasted only a handful of months.

Certainly one of GH’s biggest couples of all time is Carly and Sonny Corinthos. They have been through their ups and downs over the years, as well as other partners, but no matter who they are with or what they are going through, they always manage to re-connect. Their relationship has gotten far healthier over the years, but during their early days, they were a tad toxic together. Back in 2007, they got married for the third time and the union only lasted four months. The wedding was only organized so that Carly did not have to testify against Sonny, but it was one more reminder of just how much Carly did care for Sonny.

When Ivy discovered her U.S. immigration status had expired in 2015, she asked Liam to marry her so she wouldn’t be deported to Australia. Even though he was in love with Steffy, Liam agreed, and Carter married the pair at Liam’s beach house. When Ivy found out only days later that a mistake was made and she wouldn’t be deported, Quinn encouraged her to keep the information from her new husband. Eventually, she fessed up and the marriage was annulled mere weeks after the license had been signed.

Remember when Nikki had a fling with slimeball David Chow? The charming and handsome Chow certainly knew how to woo the ladies, as he had been known to marry rich women who mysteriously would end up passing away. While Nikki was tricked by Chow’s manipulation, their 2008 marriage only lasted about three months. One would think it was because Nikki kicked him to the curb, but the marriage ended due to a car accident, which resulted in Chow’s passing away.

Super couples have to endure some ups and downs before making it work. Such was the case with Teresa and Brady. When they first met, Teresa was a party girl looking to score big with richy-rich Brady. They engaged in drinking, drugs, partying, and other unmentionables. The two got hitched in a Vegas wedding in 2014, but the wedding was annulled three months later when Brady realized that he wanted to get clean and that Teresa was a gold-digging schemer.

Speaking of unions to keep people from testifying against each other, we fall into another similar incident that occurred on GH in 2002. Brenda’s heart has always belonged to Sonny, which made it very weird when she married his right-hand man and BFF, Jason Morgan. Alas, it was so that both didn’t have to testify against each other during Luis Alcazar’s trial. The fake marriage was annulled, as it was never consummated, in mere months after this unlikely couple said, “I do.”

Ridge and Caroline fell in love when the Forrester designer realized he could no longer draw, and he used Caroline’s hands to trace sketches. But their union was doomed from the start because she was pregnant with Ridge’s son Thomas’ baby. They said their vows to each other during a private beach ceremony on September 14, 2015 and hid the paternity of Caroline’s unborn child from Thomas. But after she gave birth to Douglas, Ridge suddenly told Caroline he wanted out and their marriage was over less than a year later.

Clearly, Nikki has been involved in many quickie marriages; after all, she has been married eight times! Between relationships with Victor, Nikki formed an incredible bond with his rival, Jack Abbott. While Nikki and Jack shared a longer marriage in the early ‘90s, in 2012 they had a union that only lasted three months. They got married in August and by October called it quits. This primarily had to do with the fact that Nikki was still smitten with Victor, but isn’t that always the reason she leaves Jack in the end.

Eve Donovan took the Kiriakis mansion by storm in October of 2017 when she claimed to be the wife of Deimos (shortly after he passed away, of course). By her timeline, the couple would’ve only been married for some months, if not weeks, until the marriage was dissolved due to his passing.

Actor Jason Cook (Matthew Hunter) and Kristen Storms (Maxie Jones) had interesting chemistry playing Belle and Shawn Brady on Days of Our Lives (DOOL). When Storms entered the land of Port Charles in 2005, Cook followed suit in 2008, and the coupling of Maxie and Matthew emerged. With that said, Maxie and Matt didn’t have quite have the romantic appeal as Shelle, and their marriage in 2012 only lasted about four-five months.

Like Steam, Liam and Hope have been married several times and their most recent marriage lasted less than a year. Liam married Hope on September 1, 2018 after learning she was pregnant with his child. But a few months after she thought she had lost their daughter in childbirth, Hope decided to annul the marriage. She left Liam for the sake of the children. She wanted Steam to reunite and she had decided to marry Thomas. Lope recently remarried again in March 2020.

Victor has also had his fair share of marriages over the years, which have occupied him while spending time away from the love of his life, Nikki. One special one to note was a love affair he shared with a younger woman named Sabrina, who also happened to be the BFF of his daughter Vicky. The two fell in love in 2008, and by August of that year, they were wed. Sabrina passed away in a car accident, which meant they only enjoyed just over a month as newlyweds.

Sami met Brandon in the early 2000s and the young and dapper man helped her forget about her obsession with Austin Reed. While he did settle her down tremendously, Sami was still a little schemer back then. The two got married in 2003, and within hours after their wedding, Brandon left her and had the marriage annulled when he found out that Sami messed with some paternity results at the hospital.

One of the shortest marriages in B&B history occurred just last summer. Knowing full well Hope’s daughter Beth was alive, but keeping that information from her, Thomas married Hope in July 2019. She had agreed to tie the knot with him so she could become a mother to Thomas’ son Douglas. The couple only spent a day or two together as man and wife, and the union was never consummated. Then Thomas’ lies blew up in his face when Hope found out Beth was alive. She had the marriage annulled a few weeks later.

Shortest Y&R marriage ever! Mac and Billy and been an on-again-off-again couple since they were in their early teens. In the summer of 2003, these lovebirds decided to take their relationship to the next level by getting hitched! With Raul (Billy’s best man) and Colleen (Mac’s maid of honor) by their side, the two said, “I do.” Sadly, it was revealed later that night that Katherine Chancellor was Jill’s mom (who is Billy’s mom) making the two cousins. Awkward to say the least. The marriage was annulled right away, and shortly after, the two left Genoa City (not together, of course). The only good news around all this is that years later it would come out that Kay was not Jill’s mom, saving both Mac and Billy a fortune in therapy bills. 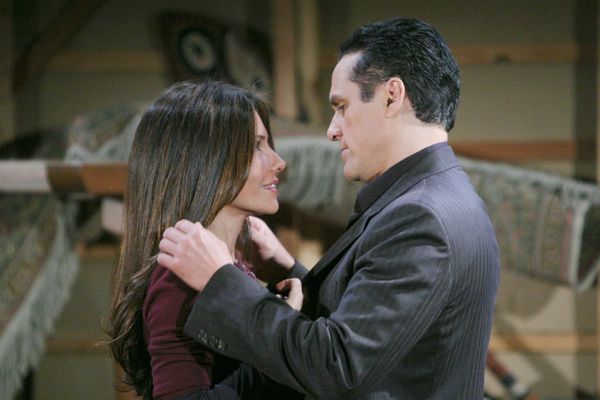