Maintaining a marriage over the long term can be almost impossible in the land of daytime drama. The same could be said for relationships in Hollywood. From General Hospital’s Sonny and Carly to the Young and the Restless’ Lauren and Michael, not to mention Days’ Doug and Julie, there are couples that can make it the long haul in soap operas. There are also real-life super couples on these shows who have endured many ups and downs over the years to stay together. Below is a list of soap opera stars with the longest real-life marriages.

Speaking of Doug and Julie, life imitates art in the most beautiful way in the land of Salem. While the two have been a strong super couple over the past four decades on Days of Our Lives, the actor and actress that play these characters also have a chemistry of their own in real-life. Bill and Susan met on the set of Days in the early 1970s, got married in 1974, and been living their “happily ever after” since!

While Bill and Susan met on a set, Wayne and Lynn met in an acting class! The two connected in 1980, and by 1981, they enjoyed an outdoor wedding while saying their “I do’s.” Herring has enjoyed soap opera success as Lucy Coe on Port Charles and General Hospital, while Northrop is best known for his work on Days as Alex North and Roman Brady.

Doug and Cindy have been together for over 35 years now! The two met on the set of the Young and the Restless in 1980 and got married in 1984. While most know Doug Davidson as Paul Williams on the show, Cindy played the lesser-known character of Rebecca. Sparks flew when the filming stopped, and a fun fact is that rock star (and soap actor) Rick Springfield not only attended the couple’s nuptials but was also in their wedding party!

While Scott is most known for his stints on General Hospital (as Steven Webber) and Young and the Restless (as Ryan McNeil) in the late 1980s he did have a small role on Days (as Jake Hogansen), which is where he and Melissa met. Of course, while Scott has hopped around the soap scene, Melissa has spent much of her career on Days of Our Lives playing the feisty, yet sweet, Jennifer Horton. Regardless, the two met, fell in love, and have been married since 1990. Not only do they have two beautiful (now adult) children, but the couple also shares two adorable grandbabies.

Can’t get any cuter than Kelly Ripa and Mark Consuelos! The two met on All My Children, where their characters’ on-screen romance spilled off-screen. The couple would end up falling in love and decided to elope in 1996. Mark and Kelly still have plenty of sparks in their relationship, even after decades of being married, and one only has to check out either of their Instagram accounts to see the chemistry that still exists between the two to this very day.

James and Kassie met on the set of One Life to Live where he played Max Holden and she played Blair Cramer. The two were smitten and ended up getting married in 1996. While they’ve gone their separate ways in the land of soaps, with Kassie popping into Salem now and again as Eve Donovan, and James working at General Hospital for a moment in time, their love, relationship, and marriage stands strong.

Michael and Crystal met on the set of Days in the early 1990s. While they were paired up in a romantic storyline, the onscreen relationship between Carly Manning and Lawrence Alamain was quite toxic. Thankfully, their real-life romance is much healthier. The two have been married since 1997, and share two sons.

These two met in the mid-1990s on the One Life to Live set, and have been happily together since! While Susan and Thorsten have kept the date of their wedding under wraps all these years, they’ve enjoyed life together along with their two beautiful daughters McKenna (born in 2003) and Marlowe (born in 2007).

Robin Christopher is best known for her roles on All My Children, One Life to Live, and General Hospital; however, what some fans often forget is that she played a pivotal role on Another World as Lorna Devon from 1993 to 1997. There, she’d met actor Matt Crane (Matthew Cory), where the two fell in love and would get married in 2000. Still together, they share two kids and currently live in Pennsylvania.

Scott and Maura met in the mid-1990s while they both were on As the World Turns. He played Andy Dixon while she played Carly Tenney, and the romantic sparks flew between the two actors off-screen. The two got married in 2000, and are raising five children together, four kids from their current marriage, and one from a previous relationship that West had. Along with managing their careers, this has to keep them busy daily!

General Hospital’s Elizabeth Webber and Juan Santiago never had a relationship onscreen, but the actors that played them felt sparks off-camera. Saucedo had a brief stint on the show from 1999 to 2001. While he was there, the two met, fell in love, and got hitched the year Michael exited the show. They are still together to this day and share three kids. While Liz has struggled over the years to find true love, Rebecca has been able to enjoy some real romance thanks to her hubby.

Young and the Restless’ Ashley is also a soap opera character that has had a hard time finding true love; however, the opposite could be said for the actress that plays her. Eileen met Vince when he had a small stint on the soap back in 2000, playing Christian Page. They would eventually get married in 2003, and have been together since.

Love was in the air, off-screen, at the Bold and the Beautiful when Schae and Mick met in the late 1990s. Sparks flew between the two, and the couple decided to say their “I do’s” in 2001. They would welcome a son in 2003, and Cain decided to step away from acting for a bit to spend more time with him. 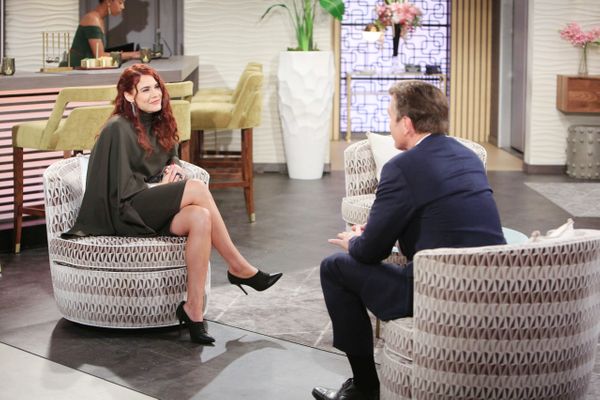