The land of soaps has had an explosive year, with plenty of ups and downs, plot twists, romances, and massive drama. While the long-term characters have helped to add to the hype in 2019, there have been a slew of newer ones who have made a tremendous impact this year. Below is an overview of daytime drama’s biggest breakout stars.

Much to the delight of many longtime All My Children (AMC) fans, Michael E. Knight re-emerged on the soap opera scene in the fall of this year, playing Martin Gray, an attorney who seems to have a soft spot for those less-than-respectable residents in Port Charles. While yes, Martin seems a tad shady, he’s also highly entertaining, and a nice breath of fresh (familiar) air on daytime screens for GH fans.

11. Donny Boaz – Young and the Restless

It had been about eight years since Chance Chancellor graced the little town of Genoa City, so Y&R fans were quite excited when his name began to be dropped (here and there) in the fall of this year during a storyline that involved Katherine’s will. While it took weeks for Chance to finally pop up on screens, it was worth the wait, as actor Danny Boaz has simply been nailing the part.

10. Brandon Barash – Days of Our Lives

With actor Tyler Christopher doing such an incredible job in 2018 as the offspring to Stefano DiMera and Vivian Alamain, many fans were skeptical about a recast in early 2019. With that said, Brandon Barash did a stellar job picking up where Tyler left off, portraying the newest DiMera in Salem, and adding a unique twist to the role that made him a little more human. Yes, Stefan would pass away as the year went by, but most fans have a good feeling this isn’t the last we are seeing of DiMera or Barash on DOOL.

Handsome, sweet, kind understanding, and smart? Yes, Dr. Neil Byrne is seemingly the perfect man, and has made a huge splash in the land of Port Chuckles. He not only helped Kristina come to her senses around Dawn of Day, but has been an excellent match for Alexis Davis so far. Here’s hoping fans see more of Neil come 2020.

8. Judah Mackey – Young and the Restless

Not only is Judah Mackey one cute kid, but he’s also one incredible young actor. While Connor is one of the youngest Newmans that resides in Genoa City, he’s also been a focal point in storylines as of late, and Mackey has portrayed this confused and emotionally distraught kid to a T. Will Connor play a pivotal role in getting his parents Chelsea and Adam to reunite? Perhaps, and here’s hoping he continues to keep fans glued to their daytime screen next year.

One of the saddest revelations during Days’ recent time jump reveal was that Haley Chen had passed. Actress and former American Idol contestant was a nice new edition to the soap opera’s cast in December 2018, and her love affair with J.J. was quite compelling. Alas, DOOL needed to offer a few unexpected occurrences during this new (and massive) storyline, leaving Haley a victim in it all, but here’s hoping Megia pops up in another soap sometime soon.

Who wouldn’t want Willow Tait as a teacher? She’s kind, compassionate, yet stern and fair. She’s also made a big splash on GH this year and was not only involved in one of the biggest storylines of 2019 but also engaged in a pretty interesting romance with PCPD officer, Chase. Who knows what 2020 has in store? Perhaps a reveal that Nina is her bio mom? Only time will tell!

5. Brytni Sarpy – Young and the Restless

It’s wonderful to see actress Brytni Sarpy finally take center stage in the land of soaps, and she did so this year when she entered the Y&R as Elena Dawson. She’s managed to solidify roots in the little town, thanks to her relationship with Devon Hamilton and friendship with Nate Hastings, but, moreover, she’s won fans over with her down-to-earth personality, caring attitude, and intelligence.

She’s only been in Port Charles for a short amount of time this year, but she’s managed to win the hearts of many during her stint so far. Played by young actress Jophielle Love, Violet Finn is sweet, cute, and may have young Charlotte Cassadine shaking in her boots when it comes to the adorable factor. With mom Hayden exiting the picture, and a new storyline centering around Finn as a full-time single dad, fans can bet they’ll see plenty more of this little girl come 2020.

Creepy cult leader Shiloh was literally the center of attention in Port Charles this year, dabbling in plenty of storylines with most characters in the little town, from Willow to Baby Wiley, Brad, JaSam, Kristina, and even Peter. Sad that he had to exit the role in the fall, as actor Coby Ryan McLaughlin was brilliant at playing the public enemy #1 that fans loved to hate, but in the land of soaps, no one is ever truly gone – so maybe we shall see him rise again sometime in 2020.

2. Tyler Johnson – Young and the Restless

Theo Vanderway has evolved considerably in the short time he’s resided in Genoa City. He’s gone from party boy social media guru, to a bit of slimeball to an Abbott, and now a swanky corporate executive. Regardless of the hats he’s worn, actor Tyler Johnson has also been highly entertaining in 2019, and it seems like he’ll continue to dabble in Jabot, and all things Genoa City, come the new year.

1. Mark Grossman – Young and the Restless

When news first broke about actor Mark Grossman being recast as the new Adam Newman, most fans thought he would flop. After all, he looked (and was) far younger than what Adam should be, and Grossman seemed like the wrong fit. That is, until he hit daytime screens. Simply put, Mark knocked it out of the park, from adding a new layer of maliciousness to Newman, while keeping his old mannerisms made famous by ex-Adams, actors Justin Hartley and Michael Mahoney, intact. Now, the Genoa City world revolves around Adam, so here’s hoping Grossman stays put in the new year, and many more to come. 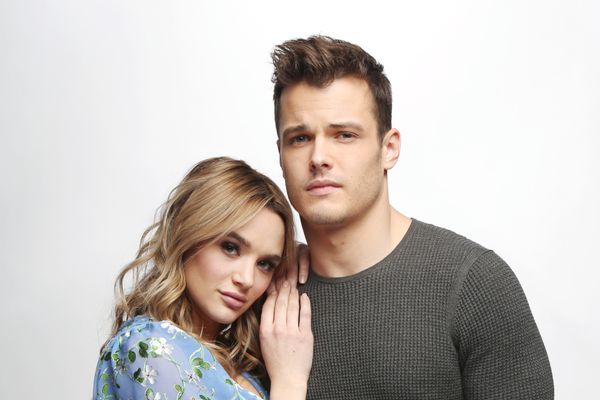 Soap Opera Couples Who Will Get Back Together In 2020