Sons of Anarchy is a heavy show that is both emotionally and psychologically hard to handle at times. Some scenes are downright gruesome, and the storylines are gut-wrenching, but that doesn’t mean there were no light-hearted moments. Earlier seasons saw a lot more humor, and while it was often offensive, dark and twisted, it fit in with the themes of the show and was actually a big part of getting fans hooked. They may have been murderers, but the humor made them more of a team devoid of the betrayals and backstabbing that would take over and destroy SAMCRO. Check out the 10 of the funniest moments from Sons of Anarchy:

Fans of the show are well aware that even the show’s funny moments are related to mutiliated bodies or, at the very least murder, and the season four episode “Family Recipe” was no different. When the club is raided by Roosevelt and his deputies, Chucky makes the decision to hide a human head in the chili he was cooking and then serves it to the officers.

Chucky: Hang on, Gemma. Hang on! It’s not ready. Gemma. Hey!
Gemma: (Stirs chili and head pops up) Hey! Did you follow the recipe?
Chucky: I may have gotten in over my head…

Tig was probably the biggest joker of them all, and Opie was one of the most serious, making their interactions even more entertaining. Throughout the series, Tig’s weird preferences and strange ways are referenced and joked about many times, and among all of the weird things about him, he has an aversion to dolls.

Opie: What?
Tig: I hate dolls, man. They creep me out.
Opie: That’s a story that needs to be told.

When it comes to romance and relationships within SAMCRO, they usually aren’t what most conventional people would consider normal or romantic. Opie’s vows to Lyla included the words, “I promise to treat you as good as my leather and ride you as much as my Harley,” and then of course there was the wedding between the show’s number one couple, Jax and Tara. For most shows, the episode is a grand affair, but not for SOA.

Jax: Let’s get married today.
Tara: Are you serious? I thought you wanted to wait.
Jax: I don’t want to wait anymore. Whatever happens, Tara, I want you to be my wife, I always have.
Tara: Here…in a brothel…Wanted for murder?
Jax: I’m all about the fairytale, baby.
Tara: So much for romance.
Jax: I killed a fed for you. Nothing says endless love like capital murder.

Over the many seasons of Sons of Anarchy, there were quite a few different ways people were killed, and even in the act of killing someone, sometimes jokes were made. In the season seven episode “Greensleeves,” Jax tires to toss Greenblatt out the window to make it look like a suicide, which is against the man’s religion; however, the “suicide” doesn’t really work as he ends up impaled on the glass and hanging on the window frame.

Before things got very dark and extremely sad for Juice, he was often the source for a lot of the show’s comedy. As the youngest and more simple-minded of the crew, Juice was constantly getting teased and hazed for doing idiotic things. One of the funniest was when SAMCRO left him in a diaper with a soother on his mouth with a sign reading “Slightly retarded child, please adopt me.”

Sheriff Hale: Get out of here before I slap indecent exposure on you.
Juice: I’m sorry Chief. I’m not sure what…I gotta go. I’m late for my 8 o’clock feeding.”

Gemma doesn’t have time to deal with drama, other people’s problems or quite frankly her own. Gemma is never looking for sympathy and is the first one to joke about the worst, including her own injuries.

Margaret: What in God’s name happened?
Gemma: I flew my broomstick into a brick wall.

Season three’s journey to Ireland was a hit and a miss for various fans of the series, and it also provided one of the most awkward yet funny moments of the series. Naturally Jax and Trinity start a flirtation; unfortunately neither have any idea that they share a father, leading to a classic Gemma Teller one liner.

Gemma Teller: This is very bad.
Maureen Ashby: Agreed. Little slut!
Gemma Teller: Yeah, he is. Well, unless we want a three-headed grandchild, looks like we’re gonna have to share some family history.”

Things are bad when even Tig is disgusted and that was the case when Half-Sack asked for Tara’s medical opinion on his infection in his personal area. Unfortunately most of the club walks in, all with hilarious reactions.

As mentioned, Juice had a problem with not thinking things through before he did them, and that included giving drugs to a couple of very vicious guard dogs in an effort to get rid of them. Instead it made the dogs even worse.

Behind all of the drama surrounding the Presidency of SAMCRO, often the one really running the club was Gemma Teller. She never let anyone push her around or tell her what to do, and was often more tough and terrifying than some of the rivaling gangs…and you know it’s bad when even Happy is scared of you. 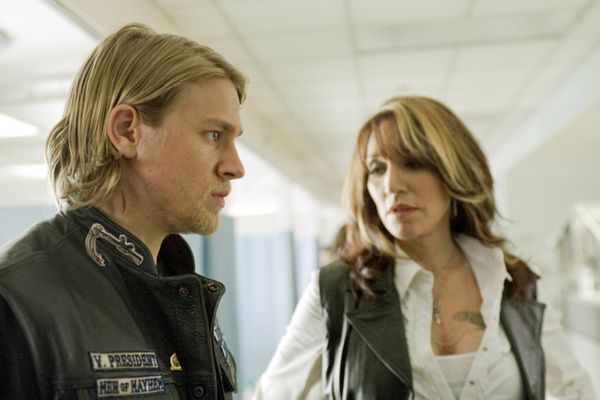