Although every new series sets out to be the next big thing, very few are successful at capturing fans’ attention right from the beginning, but that certainly wasn’t a problem for This Is Us. Now the series is facing some high expectations and audiences are soaking up every bit of information about the show that they can get. With such a talented, fun-loving and amazing cast, it can only be assumed that it is one of the best sets to be on right now! So, dive behind the scenes of the hit drama with these 10 This Is Us behind the scenes secrets:

Mandy Moore is actually the youngest out of the main cast and, despite playing their mother, she is actually eight years younger than Sterling K. Brown (Randall Pearson), seven years younger than Justin Hartley (Kevin Pearson) and three years younger than Chrissy Metz (Kate Pearson). After the casting, there was some discussion on whether or not to hire different actresses to portray an older Rebecca Pearson but it was finally decided that it would be “ideal” if Moore could pull it all off. “At first I was really excited and selfie-ing it up,” Moore said of when she would get transformed into an older Rebecca. “Now, it’s like, ‘Here we go again!’ It takes about three and a half hours. It’s not an easy process. But I’m so grateful. Who gets to play a character from 27 to 66? I feel really lucky.”

Like so many shows, This Is Us went through a couple of title changes before one was decided upon. Before it was This Is Us, the show was actually called ’36’ “which is the age they’re all turning at the beginning,” Fogelman said. “I didn’t like it. I had done a series of movies where I had never titled them and no one can agree on the title. I threw 36 on it, and then I never liked it. Nobody ever liked it. I came up with This Is Us, I think when I was in editorial. I decided I liked how it looked at the beginning [of the show], and I put it in there. But, there was a lot of debate over what the title of the show was gonna be.”

In season one’s “The Best Washing Machine in The World,” Beth Pearson (Susan Kelechi Watson) and William (Ron Cephas Jones) share a heart-to-heart moment after getting high on pot brownies together, and despite the rumors, there were no actual drugs in the brownies for the scene. “Ron and I were nerds and got together that weekend prior and just talked about the scene. We did not eat pot brownies together! There were no pot in the brownies on-set, either!” Susan Kelechi Watson explained. She added, “I don’t even know we knew how to get high, but we faked it. and we had a good time! Ron is such a great person. I don’t know if people know, but Ron is a huge theater guy in New York. He is just phenomenal and this is his first major television series and he brings so much experience with him. When you jump into a scene with Ron, you’re in it. He’s this old-school Harlem, New York guy and I love that because I’m such a New Yorker. We just have a great time.”

Without a doubt, the minor role of Dr. Katowski, played by Gerald McRaney, was one of the most endearing characters on the show, and the character’s name had a very special meaning to those involved in the show. The character was actually named after two important people in Dan Fogelman’s real life. “I’m a huge New York Mets fan, so [ballplayer] Dwight Gooden was Dr. K (because the symbol for a strikeout in baseball is a K), and I always thought, That would be a funny thing to nickname a doctor. [Also] My wife’s father’s side of the family are Katowskis — Polish — and I always like the name. So, I put that name in there for her side of the family.”

Due to the unique nature of This Is Us, when it came to casting, casting agents and producers saw actors come in for auditions that they normally wouldn’t see which lead to characters being formed differently. “Sometimes, it was like the perfect fit, but you had lots of options. Milo [Ventimiglia] was a little bit different type than the way the part of Jack was originally conceived. but he, as an actor, really responded to the role, so when he came in and read it, Dan [Fogelman] actually said, ‘I see the entire series. It was different than I was thinking but his performance in this audition actually inspired where the story might go.’ Which is the most exciting thing, when you’re in casting, and you try something slightly outside of the box,” casting director Tiffany Little Canfield revealed about finding their leads.

Going into the Christmas break mid-season during season one, fans were left with a giant cliffhanger when it came to the fate of Toby after he fell suffering from a heart problem during the Pearson family Christmas. As it turns out, that cliffhanger was the one request from NBC for their new hit show. “They always said early on, ‘When you go off the air around Christmastime, if there was some sort of cliffhanger that can lead into the break, that would be good,'” Fogelman explained. “We had always known this thing with Toby was gonna happen around that time, so that was a little guided by that. For the most part, though, NBC’s notes have been kind of small and smart,” he added about the network’s general non-interference in the creation of the series.

While all of the stars do a fantastic job in their role, a big part of playing their characters so well is because they have been able to incorporate some of their real-life qualities into their characters. Chris Sullivan revealed, “When the producers found out Chrissy Metz could sing, they immediately had to put that in. She sang live on-set twice, they recorded it, and that’s what you saw on television.” Justin Hartley added, “There’s a lot of similarities [with me and Kevin]. I was like, ‘Is Dan following me around?’ I think Kevin is afraid of heights, and I’m afraid of heights. He gets seasick; I get seasick. He’s annoying to be around; I’m annoying to be around,” the actor joked. Meanwhile, some of Fogelman’s inspiration for Metz’s Kate came from his own sister. “Kate is loosely based off of Dan’s sister and their relationship, where he was very successful as a writer and she was struggling with some issues,” Metz revealed.

Behind the scenes, the cast is really like a big family and love to joke around which led to an on-set joke that actually made its way on-screen. “Sully [nickname for Toby’s Chris Sullivan] had it and he brought it on set,” Susan Kelechi Watson said of their People’s Choice Award making its way on set. I was like, ‘You should hide it somewhere on set,’ and he took me seriously. He went on set and started hiding it throughout the scenes. I think it was the funeral scene too. If you look closely, you’ll see the People’s Choice Award moving around.”

One of the hottest topics of the show all through season one was Kate Pearson’s struggle with her weight along with her boyfriend Toby, but one thing that shocked fans was when they learned Chris Sullivan was actually wearing a fat suit for the role. The cast and show received backlash for simply not casting a bigger actor, but Metz came to her co-star’s defense, saying, “We tested a lot of gentlemen who were bigger, and I get it — people think authenticity is kind of ruined by that. But Chris has been heavier, so I think he understands the plight of being overweight.” She also added, “Also, he was just the best man for the job. And people wear prosthetics all the time — it’s just weight as opposed to, like, a nose or a chin. It’s just kind of the name of the game.”

If fans at home think it is tough watching some of the emotional scenes, it is just as bad for the stars themselves who admit they are often teary-eyed after watching episodes back. For Ron Cephas Jones, playing the dying William was even more emotional because Dan Fogelman didn’t tell him when his character was going to die. “I didn’t know when it would happen. So I played it as if William didn’t know when he was going to pass away. That’s what made it somewhat excruciating going to work each day, not knowing when – but that’s what people [with terminal illness] feel, I imagine. That could be why Dan didn’t tell me.” 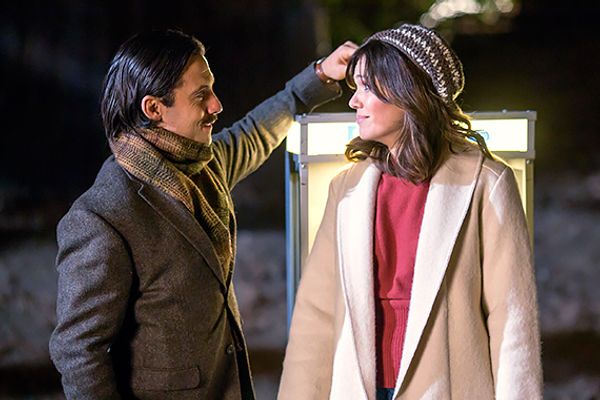