This Is Us S2 Episode 10 Recap: 8 Can’t Miss Moments From ‘Number Three’

It seems season two of This Is Us is flying by as we have already reached the mid-season finale with the highly anticipated episode “Number Three.” As always, This Is Us delivered a powerful and emotional episode all packed into one hour, and once again left fans hanging on one huge moment before its return on January 2, 2018. After both Kevin and Kate’s episode, “Number Three” was all about Randall as the show delved deeper into how his adoption and his current want to help other children has impacted his character. Sterling K. Brown delivered a gripping and incredible performance to round out the Big Three episodes, so follow along for a full recap with these 8 can’t miss moments from the episode:

As with the two before, “Number Three” began with Rebecca and Jack filming Randall learning how to walk and in true Randall style, he not only could walk, he could also talk, saying “table” as he tottered towards his parents. In the present, Randall was getting excited for Thanksgiving and looking forward to a better one than last year’s drama filled festivities, but his excitement was dashed as Deja’s mother showed up at his house wanting her daughter. After fighting with Beth and Randall about taking her daughter, Deja calms her mother down and convinces her to just be patient and let the social worker deal with getting her home. In a tense conversation with their social worker, Linda, she explains that this is “what they signed up for” when agreeing to foster a child — it doesn’t mean they get to keep her. Randall insists Deja shouldn’t go back to her mother however and says he is getting his lawyer involved.

In a flashback to Randall’s teenage years which ties into the scenes we saw in Kevin and Kate’s episodes, Randall is seen filling out his Harvard application but being drawn to Howard University, a historically black college and convinces his dad Jack to take him to Washington to visit the campus. While it means missing Kevin’s football game, Jack agrees and when they arrive, Randall meets up with his friend Keith who explains he wants to take Randall on the “behind-the-curtain” tour while Jack goes on the real campus tour. While with Keith and his friends, Randall is so happy to find the people and communities he has always been searching for as they all share their experiences of going to predominantly white high schools. The moment was huge because for once Randall felt like he was among people who really understood what he had felt growing up, and when he meets back up with his dad, he is not eager to go back home.

On the drive back home from Howard, Jack asks Randall why he hestitated to introduce him as his dad to his college friends and Randall jokes, “I hesitated not because you’re white, but because you’re old!” but then adds he hopes it help Jack understand how he feels. Randall explained he didn’t feel it from his parents but from everyone else, never like he quite belonged. “I just feel like I’m always going to feel this way,” Randall explains. “Just off balance — like everything’s just going to be a little bit more complicated for me.” Jack then decides to make an impromptu pit-stop where he takes Randall to the Washington Monument and the Vietnam Veterans Memorial where he seemingly showed Randall the name of his lost brother, Nicky. While Jack didn’t talk about his brother, he did talk about how he rarely opens up about his time in the war and the things he did and saw. He told Randall that the day he was drafted he found out on TV and since returning home, he has always felt “off balance” too. It was a huge bonding moment between Randall and Jack as Jack added he learned to find his way because life always throws you off balance and he knew Randall could find his way too.

In the present, Randall dropped Deja off at her high school and following the confrontation with her mother Shauna, he was reminded of last year’s dramatic Thanksgiving and flashed back to him reading the letter where he found out his mom knew about his biological dad William all along. Randall then flashes back to the moments after the dinner table confrontation where William recounts what happened after Rebecca abruptly left his apartment after finding out he was clean and eager to meet his 9-year-old son at the time. William reveals he actually followed Rebecca home in a cab that day, saying, “All I had to do was walk up to that door and knock,” as a fantasy sequence that never happened plays out of a young William being greeted by Jack and Rebecca and then meeting his son. The fantasy shows William present at all the “big stuff” like birthdays and Christmas, but then William says, “I saw something on the front lawn — I didn’t know what bike belonged to you, I didn’t know whether yours was ‘Number 1,’ ‘Number 2,’ or ‘Number 3.'” “Who was I to insert myself into your life against your mother’s wishes?” This was, per William, “a life I had nothing to do with” — so he left the family alone, realizing how complicated and intrusive entering their lives really would be, and realizing Randall had this whole other life on the go that would be completely and forever altered if William were to all of a sudden appear after nine years.

Back in the present, Randall’s flashback to William revealing how he almost came into his life, makes Randall realize he cannot do that to Deja. He meets Beth at Deja’s school where she is set to give a science presentation which Randall helped her with, and tells Beth he went to Deja’s mother neighborhood and saw her showing a friend new clothes she bought for the return of her daughter which made him realize “she had this whole world spinning before us.” He told Beth, they had no right to take that away from her and just insert themselves as the new constant in her life, which almost happened to him as a child if William had chosen to. Randall then gave Beth a rambling speech about how his favorite game as a kid was Pac-Man and despite its age he got their daughters interested in it too, and said that Pac-Man was like life you go around in circles, and no matter how many cherries you get eventually the ghosts come back to haunt you. While Beth laughed it off telling him “that’s bleak as hell, baby” his speech had a huge significance for the show. For one and a half seasons, This Is Us has been intertwining the lives of the Pearsons and how the past effects the present, and especially the past three episodes really drove this point home as Jack and Rebecca’s ghosts are now haunting Kevin, Kate and Randall. Kate is struggling with losing a baby like her mom did, Kevin struggles with addiction like Jack did, and Randall struggles with helping kids find their place in the world when it seems there is no one for them like Rebecca and Jack did.

With the realization they had no right to fight for Deja, the time came they had to say goodbye. Randall tells Shauna that he is always willing to help out with watching Deja or even helping her with her math and science homework and while Shauna is defensive, she adds she appreciates them taking good care of her daughter. After Deja says goodbye to Tess, Annie and Beth, she says goodbye to Randall who she had the most complicated relationship with, but in the end the most important. She asks Randall if he remembers telling her about his childhood and feeling “split inside” when they first met, and adds“I don’t want you to think that — just because I want to go home doesn’t mean I don’t like living with you,” she says, fighting tears. “I know my mother does some stupid stuff sometimes, but mostly she’s cool.” Then, in a huge moment Randall says “I know you don’t like me touching you,” and she says, “Only when I don’t see it coming,” and the pair embrace. The connection and compassion between the two makes it hard to believe this is the end of Deja’s story, but even though saying goodbye was painful, Beth and Randall agree they want to foster again and Randall jokes, “maybe a little boy this time.” As he says that, a young black boy is shown speaking to a social worker who tells him although it is taking awhile, they are working hard to find him the right foster home…which undoubtedly will be with Randall and Beth.

After saying goodbye to Deja, Randall gets a call from Kevin that he is on his way even though Thanksgiving isn’t for a few days and then Randall gets a call from his mother that Kate lost her baby. It is at this point “Number Three” stops being the Randall-centric episode and starts being the mid-season finale as it begins to tie together all three of the major stories into one ending. After Kevin arrives, he immediately makes himself a strong vodka orange juice and even though Randall tells him it is a little early for that and is obviously concerned for his brother he doesn’t push and tells him he is going to call Kate and asks if Kevin would like to as well. Kevin declines, as the guilt of not answering his sister’s calls before sets in. He then decides to abruptly leave again and tells Tess to “tell your dad I have to go.” The focus is then back on Kevin as he is seen speeding recklessly down the highway while drunk, and viewers can feel something bad is about to happen. At the same time, Randall is desperately searching for Tess, which results in Tess popping up in Kevin’s backseat after sneaking into his car and saying, “slow down Uncle Kevin.” While it seemed for sure Kevin was headed for a serious crash with Tess in the car he was instead arrested for a DUI and Beth gets the call that Tess is with him prompting Randall to respond, “I’ll kill him.”

As the dramatic ending promises a whole new change in dynamics for the Pearsons as Kevin officially hits rock bottom, in true This Is Us fashion, it was mirrored with a poignant monologue, this time from Jack. In a flashback Randall asks Jack a the hospital following Kevin’s injury if he is going to be okay, and Jack responds by telling Randall that the problem with three kids is when they focus on one something happens to the other and they should have been looking the other way. He adds that “things are going to be different for your brother from now on, but he’s going to be okay,” and says, “the thing about the Big Three is when one of you falls down, the other is standing up.” This speech plays out against the mid-season ending twist of Toby and Kate standing strong amid the loss of their baby, while Kevin gets arrested for his DUI with Tess in the car and Randall’s rage for his brother elevates. 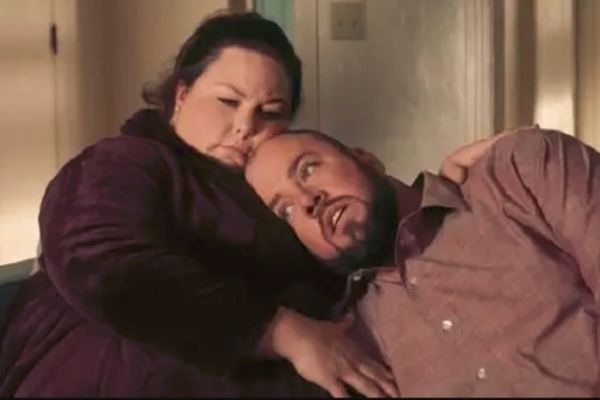 This Is Us S2 Episode 9 Recap: 8 Can’t Miss Moments From ‘Number Two’