Celebrities Who Wore Wedding Dresses On The Red Carpet

Sarah Jessica Parker is known for her unique and fashion-forward sense of style, which is why we’re not at all surprised that she is one of the groundbreaking celebs who opted for bridal attire on the red carpet. For the 2013 Golden Globes, Jessica Parker opted for a Vera Wang gown that featured a sparkling belt and cold-shoulder cutouts. Supposedly she first fell in love with the gown after seeing it on the Vera Wang bridal runway.

Beyonce loves to make a statement with her fashion and has surprisingly worn bridal attire instead of a traditional couture garment on multiple occasions! One of our favorites, however, is the time she wore a lace and crochet bridal number at the 2016 Grammys. The garment was originally seen in Inbal Dror’s fall 2016 bridal runway show and this Beyonce appearance marked one of the first times the designer was spotted on the red carpet.

Even before Serena Williams was engaged, it seems she had a penchant for bridal wear! In 2016 Williams wore the Galia Lahav “Morgan” wedding gown on the red carpet instead of a traditional couture garment. The stunning bridal look featured a two-piece set that consisted of a long-sleeve crop top and a figure-hugging mermaid skirt. This sultry bridal look was surprisingly quite different than her own bridal attire from 2017 where she wore a voluminous Princess gown with a full skirt.

Kate Hudson was a vision in white at the 2011 Golden Globes where she opted to wear a white wedding dress! The sleek bridal gown was designed by Marchesa and was made of a silk crepe material. The look featured a dramatic ruffled neckline and a structural bodice which flattered her curves flawlessly. She paired the look with sky-high platform shoes and a pair of elegant tassel earrings.

Stranger Things actress Winona Ryder stepped onto the red carpet in 2011 wearing this ethereal bridal gown that definitely turned a few heads. The crisp white number was designed by Alberta Ferretti and featured a fitted bodice alongside soft, cascading ruffles made of satin and organza along the skirt. She looked every part the blushing bride at the 2011 SAG awards, even if she just walked the red carpet instead of down the aisle!

White can be a difficult color to pull off, but Sofia Vergara proved she can do so flawlessly at the 2017 Emmys! The Modern Family actress wore a Mark Zunino number that he actually designed for his 2018 Atelier bridal collection. The mermaid gown featured a plunging sweetheart neckline, silk organza fabric, and flattering figure-hugging bodice. We love that Vergara glammed the look up by adding a bold punch of purple on her lips and dramatic chandelier earrings.

The Cannes Film Festival is known for its glamorous fashion moments, but Adriana Lima took it to the next level when she stepped out wearing this Naeem Khan bridal gown for the 2017 red carpet. The dreamy bridal number featured a sleek, body-hugging shape and a corset-style bodice which flattered her slender figure. To top off the look, Lima wore a chunky silver choker around her neck and an eye-catching red pout.

Kristen Wiig’s off-the-shoulder number from the 2015 Golden Globes wasn’t simply another white dress on the red carpet and was actually from Delphine Manviet’s Pagan Bride collection. The dress featured a soft and subtle floral print throughout and a low cut waistline which flattered Wiig’s figure. The wedding dress was straight off Delphine Manviet’s spring 2015 runway.

Kyra Sedgwick opted for a Vera Wang bridal number when she walked the red carpet for the 2010 SAG Awards. Sedgwick was one of the first celebs to pioneer the wedding dress on the red carpet trend and did so flawlessly. The bridal look was definitely red carpet appropriate, especially with the gray tulle sash and crystal brooch. The number was first spotted on Vera Wang’s 2009 fall collection.

Despite her dress being a light shade of apricot, Angie Harmon was critiqued at the 2011 Screen Actor’s Guild Awards for wearing a gown that looked too much like bridal attire. Critics were actually more accurate than they likely realized because a number extremely similar debut on the Monique Lhuillier runway for the 2010 fashion season. The Monique Lhuillier gown featured a corset bodice, a fluffy feathered skirt, and a sweetheart strapless neckline. 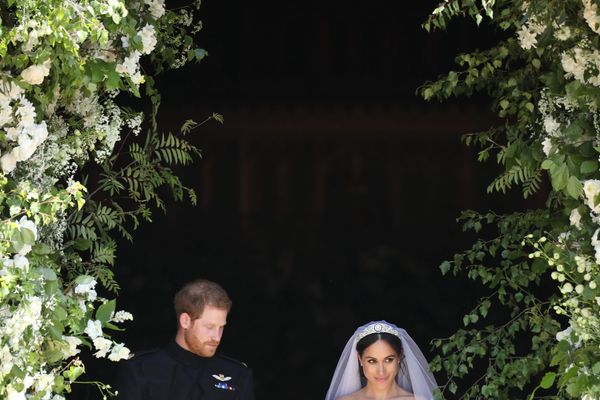