Audrey Hepburn is one of the world’s most influential style icons for her ability to remain timeless. Hepburn favored classic shapes and cuts that still look as chic and polished in current day as they did when she wore them in the ’50s and ’60s. Meghan Markle has dished for years that Hepburn inspired many of her fashion choices, and this seems to ring especially true during her time as a Royal. Markle even worked with Givenchy on her wedding dress, who was Hepburn’s longtime fashion collaborator and friend. Follow along for all our favorite Audrey-inspired ensembles worn by the Duchess of Sussex thus far.

Audrey Hepburn was infamous for her luxurious coat wardrobe and had quite a few elegant options on hand, including this double-breasted midi length coat. Markle, too, is a fan of elegant outerwear and it’s easy to draw comparisons between her taupe double-breasted coat and Audrey’s! 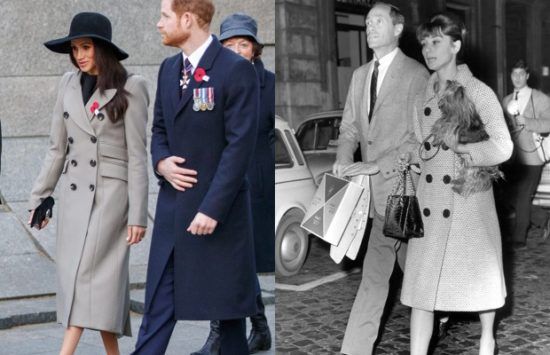 Tailoring and a flattering cut are key when it comes to dresses, which is clearly something both Markle and Hepburn mastered. One of Audrey’s go-to ensembles was a belted dress, which accentuated her impossibly tiny waist and gave her figure shape. This belted look is something that Markle has adopted into her Royal wardrobe and is a common theme among many of her outfits for public appearances. 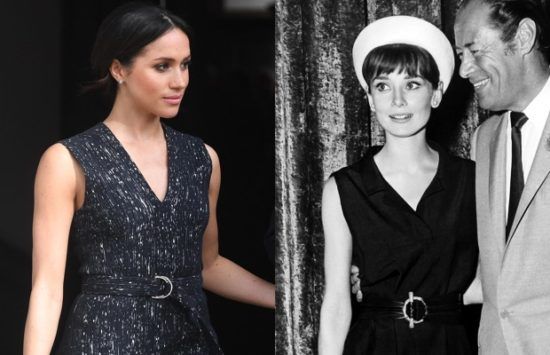 The striped blouse is a French-girl classic and is something Hepburn kept on hand for both her on-screen appearances and casual vacation looks. Markle, too, is a fan of the timeless style and was spotted wearing a summery blue and white button-up blouse while in the stands at Wimbledon this year. 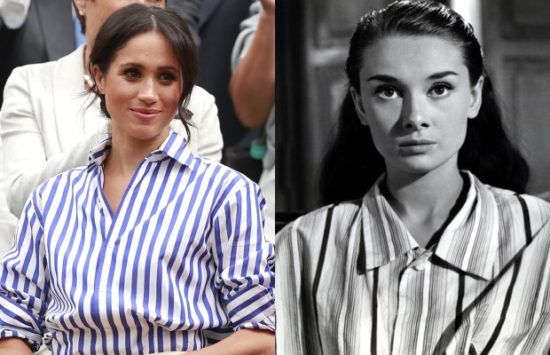 Audrey Hepburn proved that tailored pants and a simple blouse can be just as chic and polished as a dress! In the 1950s when Hepburn starred as Sabrina, her black trouser outfit and pixie cut became iconic and created a revolution of women who opted for pants over dresses. Markle, a self-declared feminist and fashion icon herself, has followed suit and has been spotted wearing black trousers over dresses and skirts during her reign as royalty. 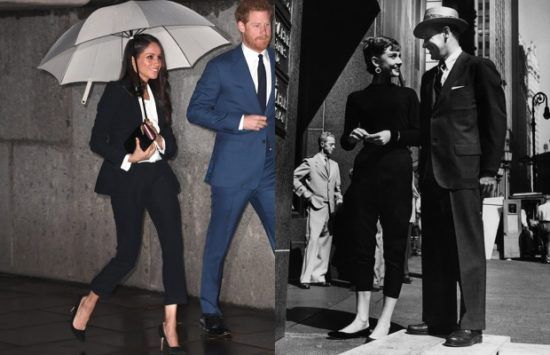 Mod-style clothing and oversized buttons were huge trends in the ’60s, as shown by Hepburn in this photo of her starring in Paris When It Sizzles in 1964. Markle has favored the oversized button-style as well and was spotted wearing a remarkably similar look during a public appearance. The look featured a soft cap sleeve, a double-breasted trail of oversized buttons and a dainty belt around the waist. 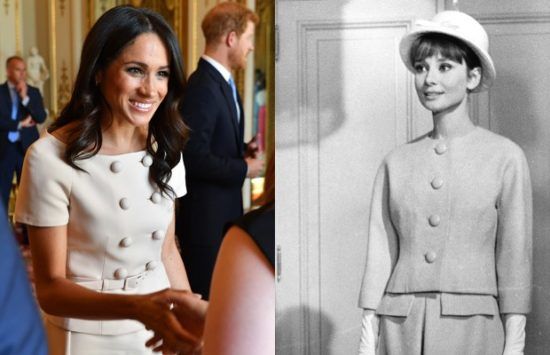 Meghan Markle has shown the pragmatic, tailored side of her style on many occasions, but that doesn’t mean she’s afraid of a feminine dress or a little lace. Markle channeled Audrey Hepburn’s iconic My Fair Lady ensemble by opting for a frilly white dress which she belted at the waist. She topped the look with a toned down version of Audrey’s iconic black and white fascinator. 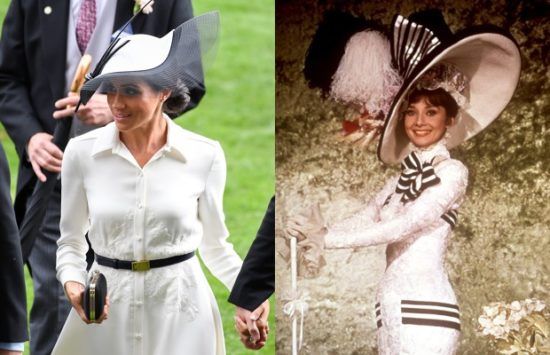 Although the little black dress is known for being Hepburn and Markle’s go-to, that doesn’t mean these two fashionistas steer clear of a bolder color every once in a while! Long before she was a royal, Markle wore this chic red v-neck dress to a celebrity engagement that is quite reminiscent of Hepburn’s little red number from Funny Face. 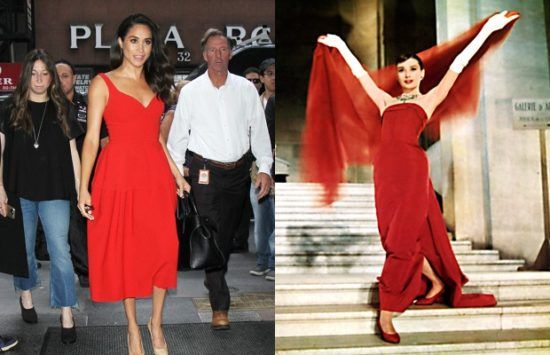 Perhaps one of Markle’s most direct moments of fashion attribution is when she stepped out on her wedding day wearing this simplistic Givenchy-designed bridal number. The look was instantly compared to the bateau-neckline bridal look that Hepburn wore when she took center stage as a bride in Funny Face. 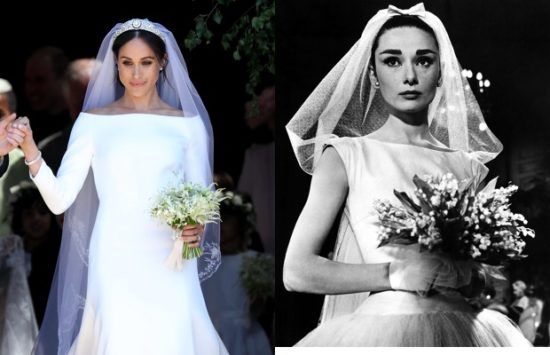 The relationship between Markle and Claire Waight Keller, the head designer of Givenchy, seems to be quite reminiscent of Audrey’s strong relationship with Hubert Givenchy himself. This Givenchy-designed taupe number that Markle wore below is particularly significant because it was her first royal outing alone with the Queen, hence she needed a strong outfit to relate the personal and important moment. The dress seemed like a direct nod to the belted, taupe Givenchy dress that Hepburn wore in Charade. 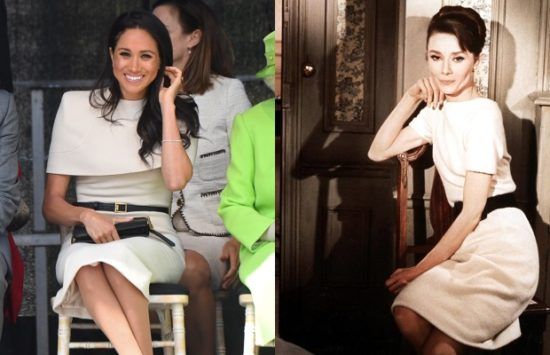 Audrey Hepburn single-handedly made the little black dress an icon when she played Holly Golightly in Breakfast at Tiffany’s. Aside from this film, she also seemed to have at least one black dress moment in most of her roles including this look from Sabrina. Meghan Markle, too, has proved to be a fan of the LBD and has worn one on quite a few occasions throughout her celebrity and royal reign. This look she wore to attend a Summer Party at the British Ambassador’s residence is remarkably similar to the one Hepburn made famous in Sabrina as both dresses feature an A-line shape, a structured square neckline, and a midi length skirt. 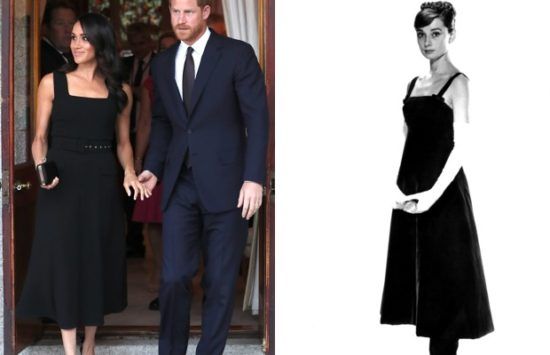 Another clear moment of sartorial homage was when Markle stepped out wearing this Bardot style dress for a public appearance with Prince Harry. Although Hepburn often favored the baton neckline, the sultry Bardot style was one she wore on occasion for evenings out or formal events. Markle adopted this classic and Audrey-favored neckline for a special appearance at Trooping the Colour and looked as elegant as ever! 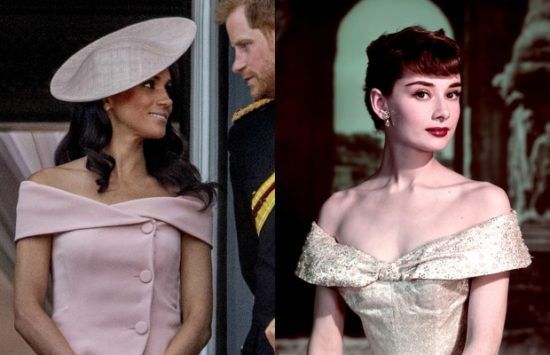 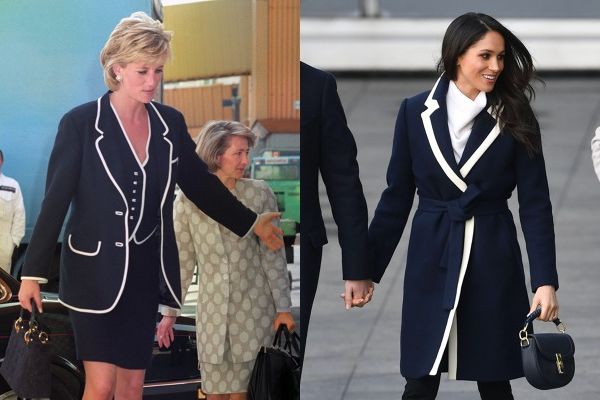 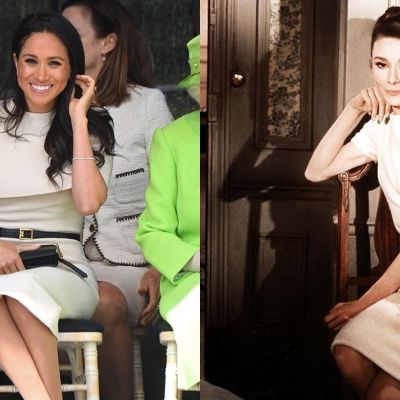