Human rights activist and lawyer Amal Alamuddin seems to have it all — the smarts, the man, the beauty and the style! Upon marrying George Clooney, Amal was thrust into the Hollywood spotlight and her effortlessly sophisticated and chic style garnered quite a bit of attention. Amal’s statuesque figure can pull off even some of the boldest styles yet she always manages to look polished and classic. Follow along as we re-trace some of Amal Clooney’s memorable fashion moments so far:

In 2015 Amal debuted on the arm of the ever-handsome George Clooney for the annual Golden Globes red carpet. Her black dress was understated and sophisticated with a flattering one-shoulder neckline, pleated belt detail and a dramatic cape trailing over one shoulder. Since the little black dress moment was overall quite simple, she accessorized with a pair of white gloves for something unexpected and chic. Not many women could pull off white gloves in the modern day, yet with this look, Amal managed to make them look like the latest must-have accessory! 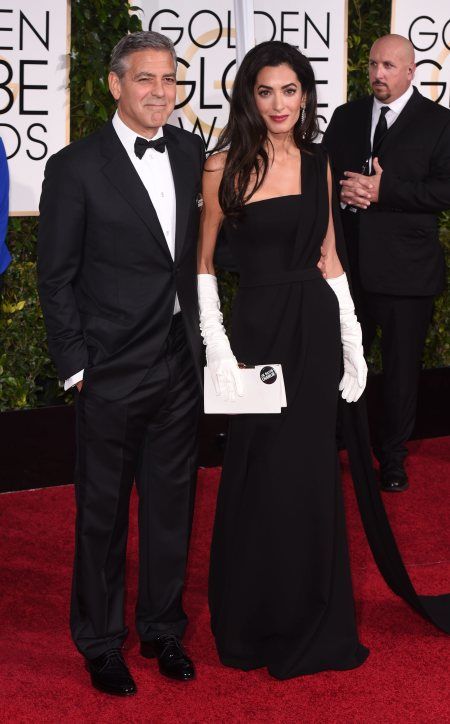 In 2017 Amal Clooney showed off her budding baby bump on the César awards red carpet in France in a sleek Versace number. The form-fitting gown hugged her curves along the bodice and flared out into an ombré feathered skirt. We love how this look is both sophisticated and fun at the same time, which seems to be the epitome of Amal’s style. With a tall, slender figure like hers, this bold style works flawlessly! 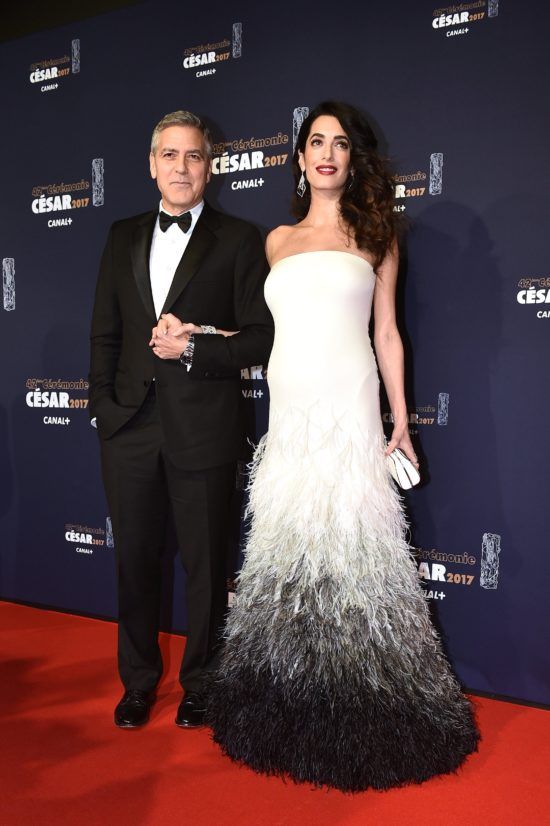 George and Amal Clooney’s 2014 wedding ceremony in Italy was the event of the season! The gorgeous duo wed in star-studded affair worthy of more than a few swoon-worthy fashion moments. One of our favorite looks of Amal’s from the weekend is this white pantsuit outfit which featured a coordinating wide-brim hat. The look was as glamorous as it gets and definitely a fabulous style moment we will never forget. 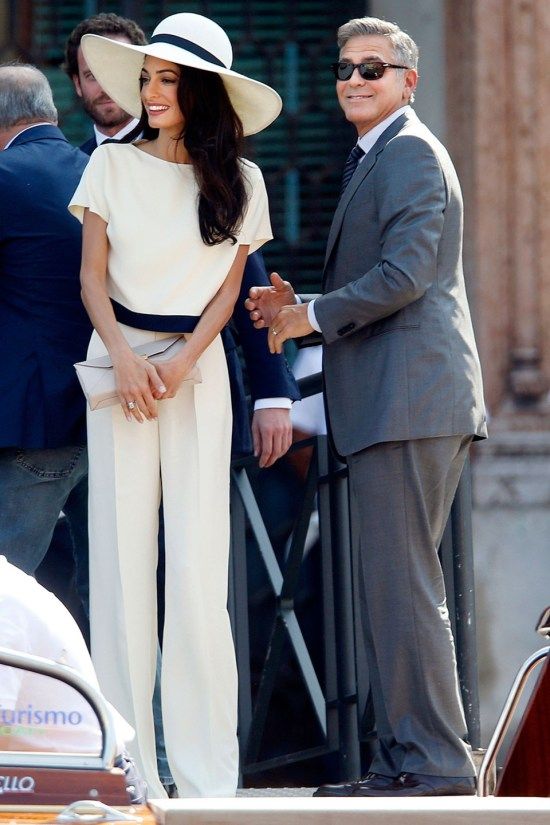 George and Amal Clooney posed arm-in-arm at the AFI Lifetime Achievement Awards earlier this year. Amal donned a shimmering blush pink dress that played up the fun and flirty side of her style. The look featured a dramatic off-the-shoulder neckline and a miniskirt that peaked out from below a draped skirt. The look was feminine and romantic, especially with the soft side-swept hairstyle she rocked. 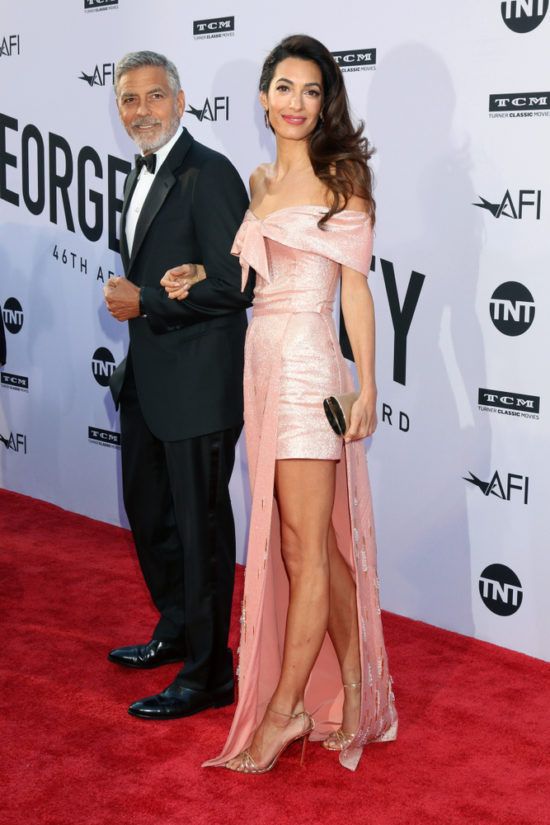 Amal opted for a bold minidress for the HAIL CAESAR! premiere in 2016. We love how Amal changed her look up for the event and opted for a shorter and flirtier hemline instead of her typical long and elegant style. The minidress showed off her long legs flawlessly and the flared tulle skirt added the perfect amount of playfulness to her look. She coordinated her makeup with the red floral applique of her dress by opting for a cherry red lip and pulled her hair into a sleek side-swept style. 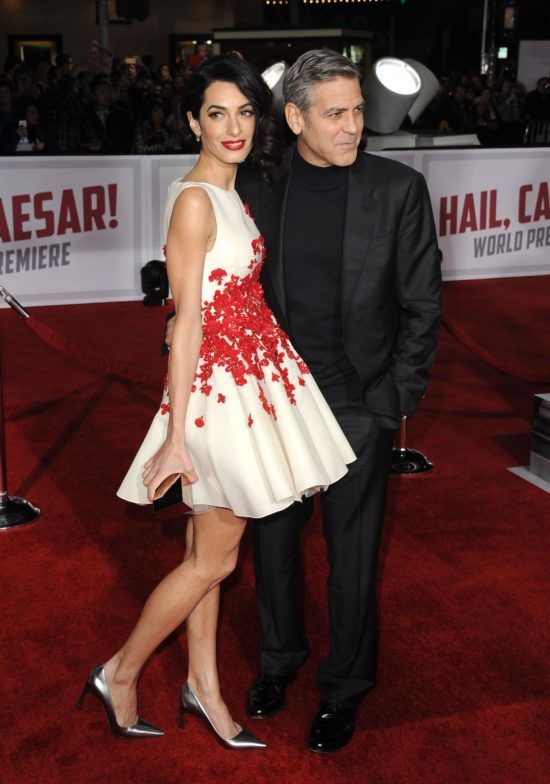 With Amal’s dark features she could seemingly pull off any color and this look from the 2017 Venice Film Festival proves this to be true! She stepped out on the red carpet alongside George Clooney wearing a soft lilac dress that featured a chiffon skirt and pleated bodice. She pinned her hair into a faux lob to channel old Hollywood vibes and accessorized with drop style earrings. 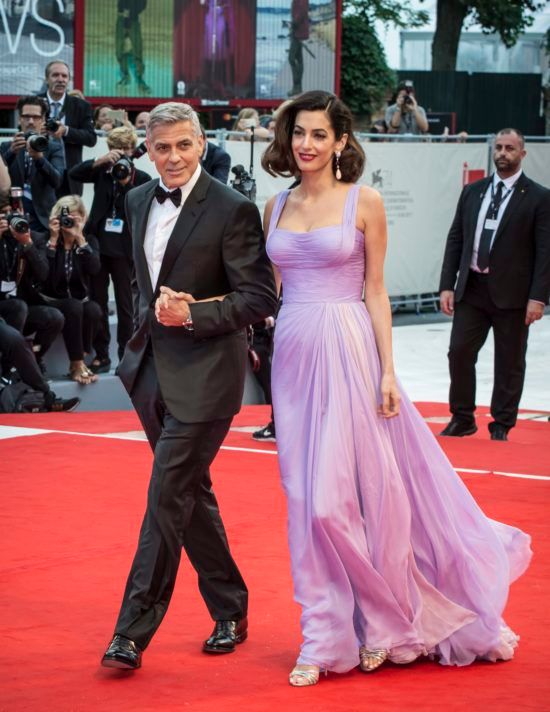 Amal and George Clooney were definitely a few of the best-dressed wedding guests at Prince Harry and Meghan Markle’s royal wedding! Amal opted for a sunny yellow dress which hit her at a flattering mid-calf length and featured delicate pleating along the collarbones and waist. For added drama, the dress also featured a subtle train and she accessorized with a chic mesh fascinator. 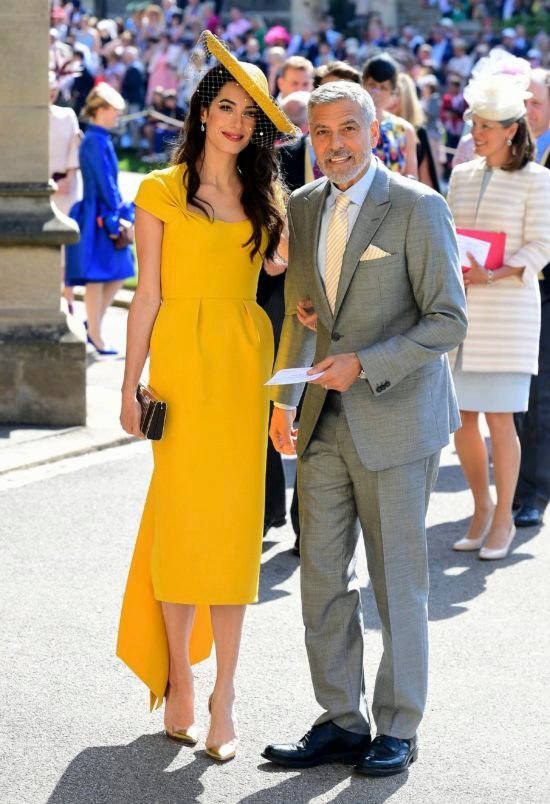 Another one of Amal’s most fabulous fashion looks happened during her wedding weekend in 2014! The bride-to-be stepped out in a long sleeve white dress that featured peach and fuschia floral applique throughout. The uber miniskirt showed off her slender and long legs flawlessly and the slight flare on the skirt added the classic Amal playfulness. The look was the perfect whimsical, feminine number for a bride to wear on her wedding weekend. 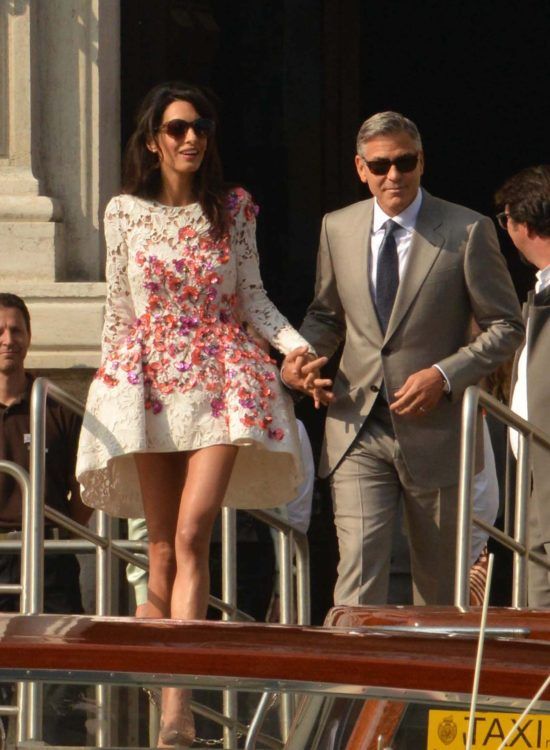 Amal Clooney undeniably made heads turn when she stepped out on the 2018 Met Gala red carpet wearing this dramatic number! Her look was praised as one of the favorites of the evening with its shiny metallic texture and dramatic floral embroidery. We love that this look was a combination of sophistication and flirtiness by featuring a full skirt paired with trousers peeking out from underneath. 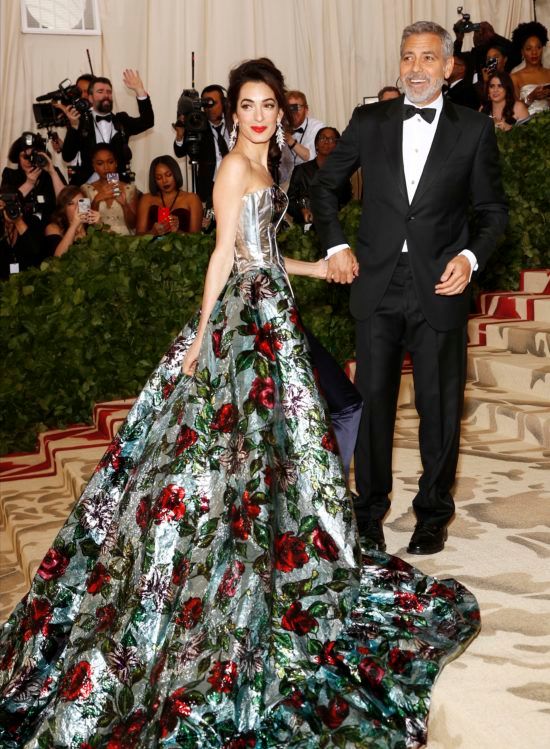 The Cannes Film Festival typically has quite a few standout fashion moments, but one of our all-time favorite looks is this soft yellow gown that Amal Clooney wore on the red carpet in 2016. The look was designed by Atelier Versace and was the perfect light, summery number for the French Riviera affair. The bodice featured delicate pleating and a one-shoulder detail alongside a belt which cinched in her waist. Amal accessorized with tangerine earrings and a pop of the same shade on her lips. 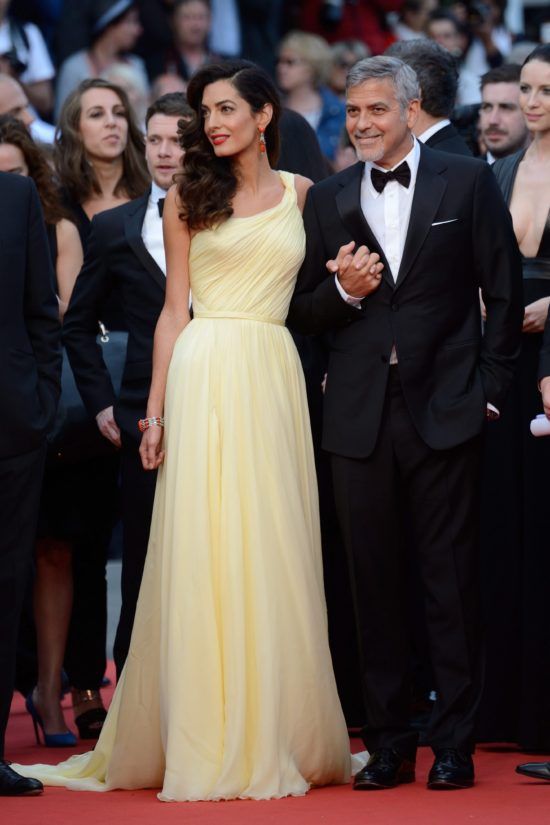 Amal Clooney dazzled on the Berlin International Film Festival red carpet in 2016 where she stepped out in this sparkly and sheer black number! The Yves Saint Laurent number showed off her figure with the body-hugging silhouette, but the whimsical tulle layer brought the drama and glamour. She kept her makeup and hair quite minimal and natural, aside from her classic Amal Clooney red lip which she’s made her red carpet signature. 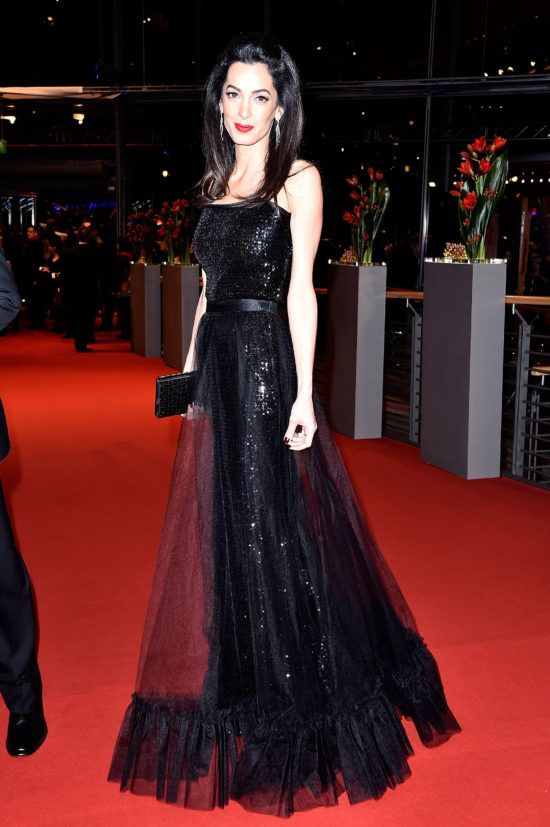