The 2019 Oscars marked the official close of the this year’s award show season. In 2019 we saw a long-running list of show-stopping dresses throughout all the red carpet events, but today we’re rounding up the absolute most memorable ones, whether it be for the best or for the worst. Follow along for a recap of all the best and worst-dressed stars of 2019’s award show season:

Country star Maren Morris stepped out at this year’s Grammy awards wearing a gown designed by Galia Lahav. While we actually don’t mind this muted dusty purple gown, the shoulder detail of the lime green embellishment totally clashed and detracted from the dress.

Unsurprisingly, Lady Gaga looked absolutely angelic at this year’s SAG Awards where she opted for a voluminous white gown designed by Dior Haute Couture. The shredded tulle hemlines of the gown were feminine but also edgy, which perfectly encapsulates Gaga’s personal style. She accessorized with a chunky gold choker necklace and an oxblood lip which made for a truly glamorous red carpet moment.

As much as we love Viola Davis as an actress, we can’t say we were fans of her dress for this year’s BAFTAs. The black dress was undeniably sleek, but the oversized white bow detail along the chest seemed to detract from the entire ensemble.

Jada Pinkett Smith absolutely dazzled on the Grammys red carpet this year where she stepped out in metallics and feathers in the most tasteful way possible. Her look was the perfect example of being dramatic and glitzy without going over the top.

Maya Rudolph left us stunned with her red carpet look for the 2019 Oscars, but not in a good way. This look had everything from a cape to ruffles to a bold color and even a print. It simply felt like too much.

Mandy Moore was one of the most elegant stars of the evening at this year’s SAG Awards. The brunette beauty opted for an off-the-shoulder dress by Jason Wu that featured a touch of glitz around the shoulders, long sleeves, and a sultry thigh-high slit.

Emma Stone wore quite a strange dress for this year’s Oscars red carpet. The look was designed by Louis Vuitton and featured a bizarre checkered chocolate and gold print. Many were comparing her look to a waffle, which we can totally see!

Crazy Rich Asians star Gemma Chan stole the show at the SAG Awards this year in this powder pink ruffled dress by Oscar De La Renta. The look featured high-fashion layers that were scalloped along the edges and a flattering black belt that showed off her tiny waist perfectly among the dramatic layering of the skirt.

Masculine tuxedo dressing is one of our favorite looks for women to wear on the red carpet, but Judy Greer totally missed the mark with this trend at the 2019 Golden Globes. The wide leg pants drowned her figure and the tuxedo and bow tie combo was far too sharp and harsh.

Of all the Golden Globes red carpet looks in 2019, one of our absolute favorites had to be Sandra Oh’s debut dress on the red carpet. The co-host and Golden Globe winner definitely had a monumental evening with a wardrobe to match! We love all the flattering ruching on this dress and her old Hollywood-inspired finger waves.

Olivia Munn had a highly questionable polka dot moment at this year’s Critics’ Choice Awards. The star opted for a disastrous black and white look that was anything but simple. From the ruffles to the varying sized polka dots to the heavy sash, this look seemed to have everything, but not in a flattering way.

Lupita Nyong’o is one of the most well-dressed women in Hollywood, and she proved that even further with her striking beaded look for the 2019 Golden Globes. The floor length dress was a stunning blue-violet color and featured intricate silver beading throughout. For even more glitz, Nyong’o topped the look with sparkling drop-style earrings.

Of all the looks from this year’s SAG Awards, we have to admit we were the most disappointed with this look worn by Alison Brie. While the dramatic bow detail along the back of the dress looked pretty from behind, from the front it resembled a strange set of wings. We love the sleek shape of this little black dress, but the detailing on the back was totally distracting.

Lady Gaga is known to make an entrance when it comes to the red carpet, and she definitely didn’t disappoint for the 2019 Golden Globes. The A Star is Born actress opted for the eccentric route and decided to match her dress to her freshly dyed pastel hair! We absolutely love this unexpected touch of coordination.

We were quite puzzled when we saw Maggie Gyllenhaal’s dress of choice at this year’s Critics’ Choice Awards. The silky Prada gown was a bizarre shade of light greenish-yellow and the sleeve detailing left many fashion critics quite underwhelmed.

Saoirse Ronan dazzled on the Golden Globes red carpet in this silver chainmail dress with a plunging neckline. She was one of the last to arrive on the red carpet and she seriously stole the show! The striking Gucci dress was sultry but also delicate, which made it a jaw-dropping red carpet moment.

Lady Gaga blew us away with her silver ruffle dress at this year’s Grammy Awards! This look actually seemed somewhat modest for how Gaga usually dresses for awards shows, which felt refreshing. It was obviously still dramatic but in a glamorous and appropriate way.

Emily Blunt has had a few misses on the red carpet this past year, and we were disappointed to say that she struck again at the 2019 SAG Awards. While we were actually big fans of the slim and glittery shape of this custom Michael Kors dress, we can’t get over the strange ruffled shoulders that overpowered and detracted from the entire look.

Kiki Layne looked absolutely angelic on the 2019 Golden Globes red carpet in this tulle corset gown. The custom Dior number in a stunning shade of ashy blush worked perfectly to highlight Layne’s skin tone. We also love how her hair was coiled into a polished topknot and lowbun, which we thought resembled an elegant ballerina.

Jennifer Lopez was a total bombshell when she performed on stage at this year’s Grammy awards, but we have to admit we weren’t the biggest fans of her first red carpet look. While the dress itself wasn’t too bad, we can’t say the same for the wide-brim hat she decided to add to her look. It simply felt like it distracted from the detailing of her gown!

Margot Robbie absolutely nailed her Screen Actors Guild Awards look this year with this gold and white Chanel number. We love the sleek, column-style shape of this dress and how flattering the gold tiers are that trail along the skirt. This glitzy look is the epitome of old Hollywood glamour!

Janelle Monae is always experimental with her fashion, but we’re not sure her 2019 Golden Globes look was a risk well-rewarded. The Chanel look consisted of a tailored tweed dress with dramatic gold detailing and a white underlay that peaked out on her arms and legs. To make matters even more strange, she topped the look with a circular gold hat that definitely had fashion critics scratching their heads.

Sandra Oh dazzled in crimson red at this year’s Screen Actors Guild Awards where she donned a slim, sparkling dress by Jenny Packham. We absolutely love the unique layering and asymmetrical details of the bodice on this dress and how fabulously it flourished out into a glamorous full train behind her.

Crazy Rich Asians star Michelle Yeoh was undeniably one of the best-dressed women of the evening at the 2019 Oscars. She stepped out wearing a blush and silver Elie Saab number that featured the most beautiful foil embellishment. It was unique, whimsical and totally glamorous.

We had high expectations for Margot Robbie’s look at the 2019 BAFTAs, but we have to admit we weren’t the biggest fans. The ruffles on this dress seemed to resemble wings and simply felt like too much, especially in combination with all the glitter of the bodice.

Regina King was an absolute bombshell on this year’s Golden Globes red carpet. She opted for an Alberta Ferretti dress in a dazzling shade of rose gold that flattered her complexion and features flawlessly. It hugged her curves in the best way possible and truly left us speechless!

Of all the looks at this year’s Grammy Awards, we were the most confused with this Balmain look worn by Kylie Jenner. It totally drowned her shape in every way from the bizarre sleeves to the oversized pants.

Unsurprisingly, our favorite look during the 2019 Awards shows season was the whimsical and floaty dress worn by the Duchess of Cambridge, Kate Middleton, at the BAFTA Awards. The Duchess always nails her BAFTAs look each year and 2019 was no exception. We love the frilly shoulder detail of this dress which was the perfect example of glamor without going overboard. 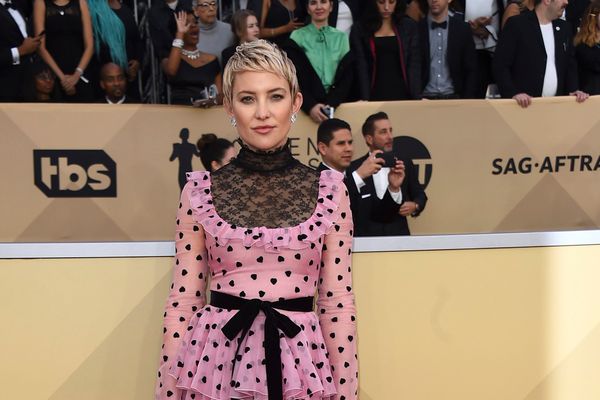