The Royal women are required to follow a certain level of professional and sophisticated dressing as enforced by the Queen. Kate Middleton followed royal protocol when she joined the Royal family and began to shift her wardrobe to one filled with tweed suits and modest dresses. When Meghan Markle joined the Royal family, she was forced to do the same thing. Royal fans can’t help but compare Meghan’s style to that of her Royal sister-in-law Kate Middleton, so follow along as we re-trace all the royal fashion moments where they dressed similarly:

No one can resist a lady in a red dress, and clearly, this is something both Kate and Meghan have caught on to. In 2016, Kate Middleton stunned in this ankle-length cherry red dress that featured an asymmetrical neckline and a simple brooch. In July of 2016, Meghan Markle also stepped out in a similar bright red ankle-length dress when she appeared on the Today show. This appearance was prior to Meghan’s Royal reign, so she opted for a low cut neckline and undone waves in her hair. 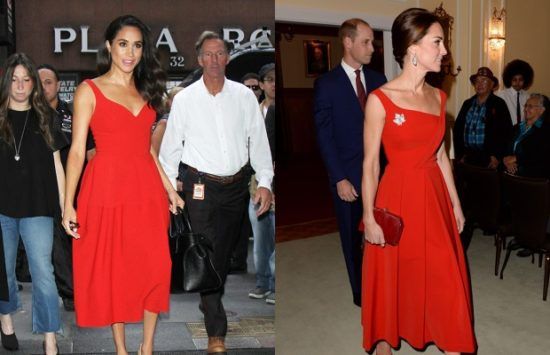 The Duchess of Cambridge Kate Middleton stepped out in January to visit the Reach Academy Feltham in London wearing a navy button-up coat. The coat was quite similar to one worn by Meghan Markle during a public appearance with Prince Harry. While Kate’s version of this look was tailored and classic, Meghan’s leaned more towards the trendy, fashion-forward side. 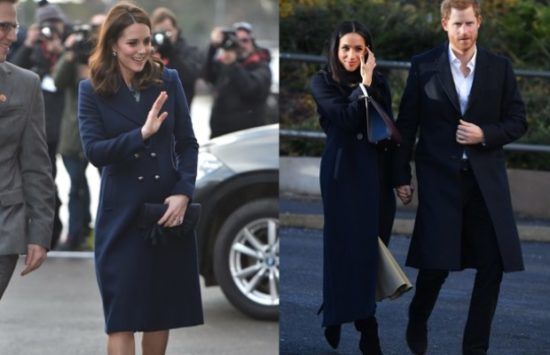 A common look that both the Duchess of Cambridge and Sussex have stepped out wearing this past year is a dress that features a cape detailing, Meghan wore a cape dress on her Australian Royal tour in a faded blue color that was slim to her body and showed off her budding baby bump. Kate Middleton, on the other hand, also wore a cape look while pregnant, but she opted for a blush pink color with silver detailing. 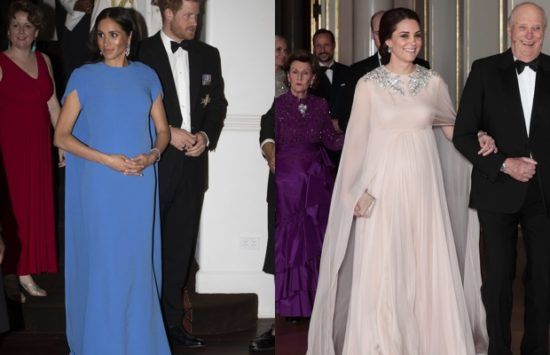 Lace has been a long-time favorite of Kate Middleton, but also apparently Meghan Markle! Kate has worn lace multiple times for public appearances that it’s become somewhat of a signature for her. While Markle hasn’t opted for lace that often during her royal reign so far, we can’t help but fondly remember the navy lace dress she wore on the red carpet as an actress! It’s remarkably similar to this black cocktail dress worn by Kate. 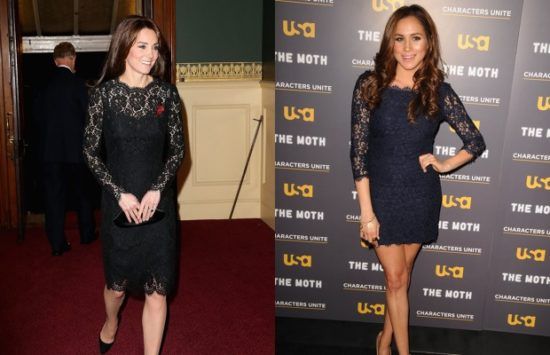 While lace may be a signature of Kate Middleton, Meghan Markle has made a signature of her own — wide leg pants! While this look was initially criticized, she continues to step out time and time again in the look. Clearly, Kate Middleton is a fan as well, since she recently stepped out in a pair of wide-leg trousers herself. The fashion moment was quite the shock because Middleton typically prefers pants that are a little more tailored and skinny in the legs. 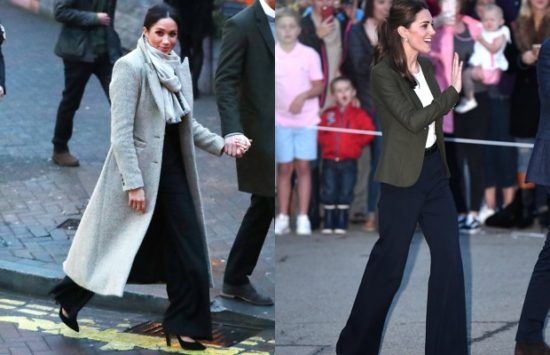 Both Kate and Meghan love a classic feminine dress from time and time and have opted for similar pink dresses in the past. Meghan’s dress was a sleek satin texture that featured a bateau neckline and round buttons trailing the front, while Kate’s featured a V-neck, peplum top and pleated skirt. 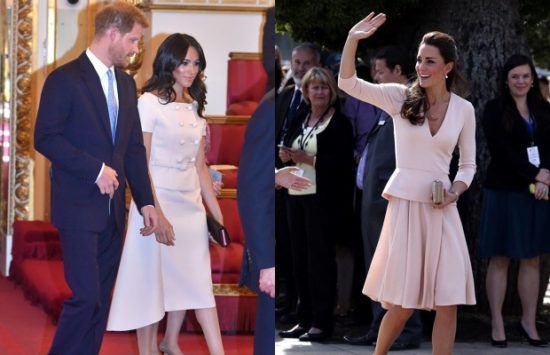 Wine-colored, burgundy dresses have been a beloved shade for both Meghan and Kate during the colder months. Recently Meghan stepped out in a look that many compared to Kate’s style with its a preppy collar, shift dress shape, and black tights. The comparison of Meghan’s look to one worn by Kate Middleton last year is quite clear! 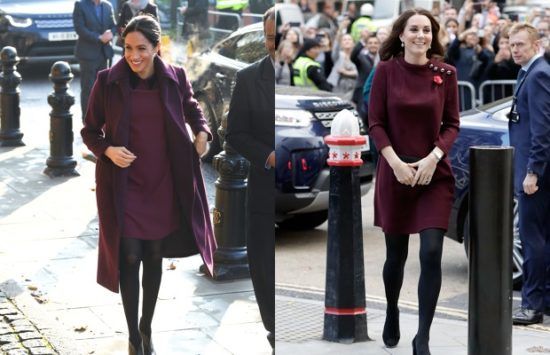 Kate has been a longtime fan of blazers and skinny trousers for public appearances throughout the years. Most recently, however, she’s shifted towards a more trendy take on the look with a checked blazer and black skinny jeans. We can’t help but wonder if she took a page out of Meghan’s playbook with this look since it’s quite similar to an outfit worn by Meghan on her Australian Royal tour. 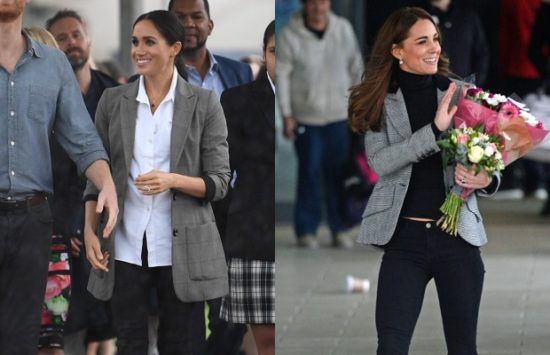 Bright yellow is a tough color to pull off, but of course, the Duchess of Cambridge and Sussex both look fabulous in it. Meghan wore a yellow midi-length dress earlier this year for an appearance with Prince Harry, while Kate was spotted in the stands in a yellow dress of her own while attending Wimbledon. The comparison is obvious, but we think both women look absolutely striking! 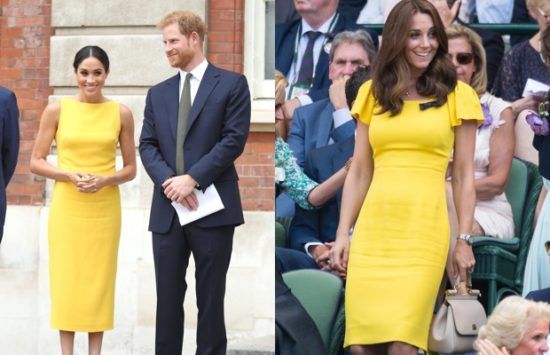 Meghan Markle has favored a slight off-the-shoulder neckline time and time again during her royal public appearances, and Kate Middleton seemed to hop on that train as well earlier this year! Meghan wore a checked top that she paired with a loose low bun, while Kate wore a checked dress in a soft shade of purple paired with soft waves. 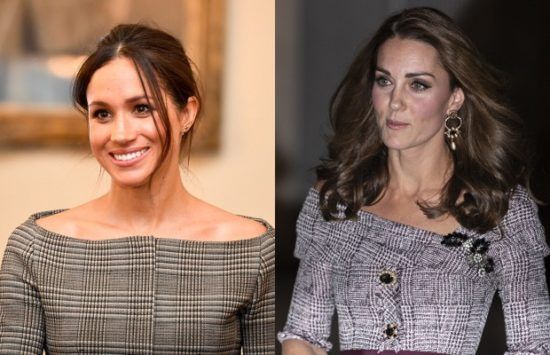 Another print that seems to be a favorite among both royal women is tartan print! Meghan wore the print earlier this year in February while making an appearance in Scotland, as a nod to their country’s national colors. Kate wore a strikingly similar print but in dress-form back in 2012 for St. Andrew’s Day. 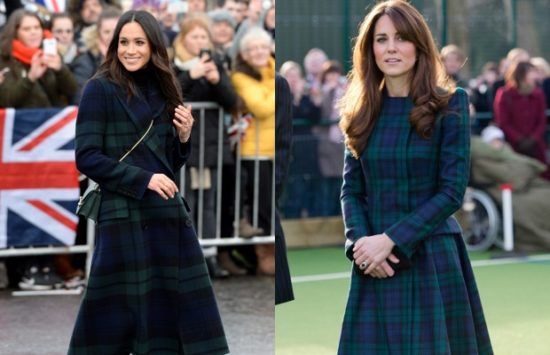 Meghan Markle has a special place in her heart for Canadian fashion and designers after living in Toronto for many years to film Suits. Despite her big move to England, she still tends to often wear Canadian designers like this Sentaler coat she wore for Christmas 2017. Kate Middleton is clearly also a fan of the Canadian brand and wore a similar coat in 2016 when she visited the Yukon in Canada. 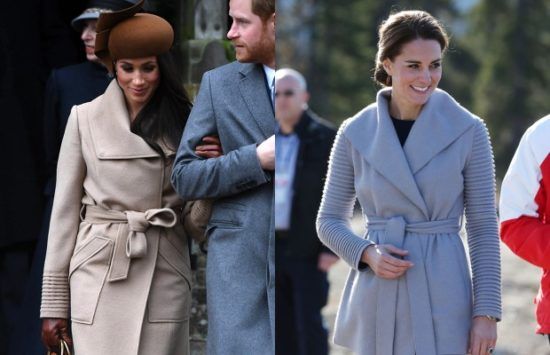 This past summer both Kate and Meghan had a twinning moment when they stepped out across the world wearing similar dresses just days apart. Meghan was spotted arriving at Australia’s Fraser Island in a button-up polka dot dress, while a few days earlier Kate stepped out in a nearly identical look while hosting a reception for inspirational teens alongside Prince William. They both look fabulous! 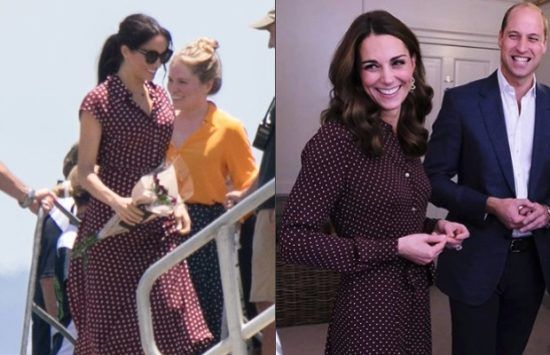 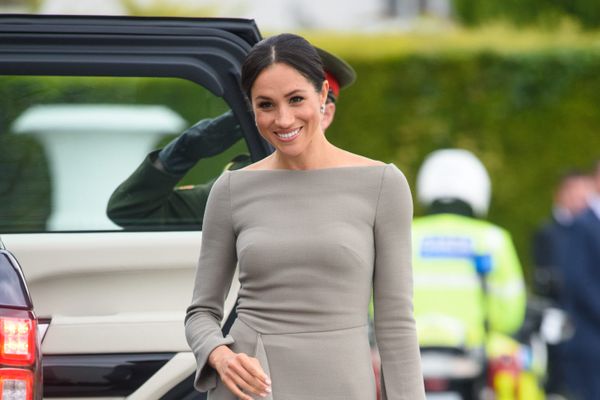 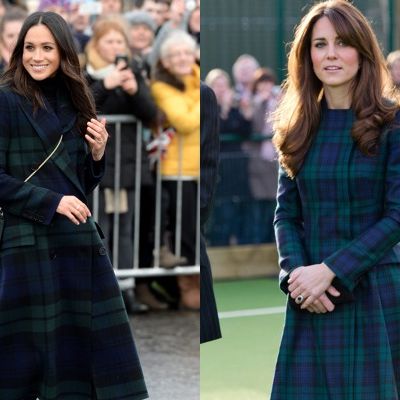