On-screen, Amy Adams is a force to be reckoned with. Off-screen, she’s still figuring some stuff out fashion-wise. At some events, she looks exquisite while, at other events, she obviously needs some help putting together an Oscar-winning outfit. It is hard to believe that she has been in the spotlight for over a decade now. We are hoping that she finally wins an Oscar in 2015 and that she finally establishes herself as a red carpet fashion star – no more hitting then missing! Because we love Adams so much, we figured now would be a good time to see her fashion evolution!

Premiere of Win a Date with Tad Hamilton – 2004

Amy Adams attended the premiere of “Win a Date with Tad Hamilton” wearing this brown and black striped dress with pink heels. The dress isn’t anything to write home about and the heels do not match at all. The outfit would have looked much better if she had gone with some brown or black heels. She was still trying to launch her acting career at this point. She landed a role in Catch Me If You Can as Leonardo DiCaprio’s character’s fiancée. The part should have launched her career, but it didn’t.

Adams didn’t have a lot on her acting resume at this point. She was appearing in small, questionable films like “Psycho Beach Party” and she guest starred on television shows like “That ‘70s Show,” “Charmed,” “The Office,” “Buffy the Vampire Slayer,” “Smallville” and “The West Wing.” For someone with her skillset, it is amazing to see what she had to do to make it in Hollywood.

The struggling actress showed up at the screening for “Walk the Line” wearing this pretty black dress with matching heels and a matching clutch. This is a much better look on her than the striped dress. It is simple but classy. 2005 turned out to be a great year for her. After years of struggling to make it, she finally did!

Adams’s breakthrough role was in “Junebug,” a low-budget independent film. She played Ashley Johnson, a young, cheerful and talkative pregnant woman, which ended up earning her numerous critical accolades. Carina Chocano of Los Angeles Times praised her performance. “Adams’ performance in a role that could have easily devolved into caricature is complex and nuanced,” she noted. In addition to the all the praise she received from the critics, she received several awards for Best Supporting Actress, as well as nominations from the Screen Actors Guild and the Academy Awards.

Amy Adams looked pretty sophisticated at the 11th Annual Critics’ Choice Awards. She wore a simple white dress shirt with a long black skirt. It isn’t an especially creative outfit, but at least she looked respectable. After her Oscar-nominated performance in “Junebug,” her career started to take off. In 2006, she went on to land roles in films like “Standing Still,” “The Wedding Date” and “Talladega Nights: The Ballad of Ricky Bobby,” alongside Will Ferrell.

“Standing Still” was the only film that gave her a lead role. Unfortunately, it wasn’t a critical or commercial success. “Wedding Date” and “Telladega Nights” gave her supporting roles; however, neither of them were the types of flicks that got the attention of the Academy. Either way, Adams has come a long way from when she was first working as a professional dancer at Boulder’s Dinner Theatre and Country Dinner Playhouse and Heritage Square Music Hall.

The “Junebug” star kept it simple and chic at the 2007 Film Independent’s Spirit Awards in this strapless black and white dress. She’s definitely being a bit bolder with her fashion; however, we’d like to see her move away from black and white and add some much-needed color to her wardrobe.

In 2007, Amy Adams landed the role of Gisele in the Disney film “Enchanted.” Three hundred women auditioned for the role, but she stood out. According to the director, she landed the role because her “commitment to the character, her ability to escape into the character’s being without ever judging the character was overwhelming.” The film ended up being a commercial success, grossing more than $340 million worldwide. She also received a number of nominations for her performance, including a Golden Globe Award nomination for Best Actress – Motion Picture Musical or Comedy, as well as a Critics’ Choice Award nomination for Best Actress and she won the Saturn Award for Best Actress.

Amy Adams finally stepped out in some color at the 12th Annual Hollywood Film Festival Awards. She wore this strapless Oscar de la Renta cocktail dress. The only problem that we see with the ensemble is the nude heels. Given the black details on the dress, black heels would have been a much better choice. That being said, we really like the dress. It is a definite winner in our eyes.

2008 was another exciting year for Adams professionally. She landed a supporting role in “Doubt,” alongside Phillip Seymour Hoffman and Meryl Streep. The critics were impressed with all of their performances; however, many critics had a certain soft spot for Adams. According to Mick LaSalle of San Francisco Chronicle, “Adams provides one of the film’s singular advantages. She takes the role of Sister James, which onstage seemed little more than a sounding board for Sister Aloysius, and turns the young nun into someone quite specific and lovely.” Her performance was so outstanding that it earned her a Screen Actors Guild Award and an Academy Award nomination for Best Actress.

The “Doubt” star looked stunning at the premiere of “Julie & Julia.” She rocked this white RM by Roland Mouret Aphrodite dress with nude suede Brian Atwood heels. We love this dress on her. It is simple, but elegant. Unlike some stars, she never really goes all out for premieres or award shows. We are kind of looking forward to the day when she finally does! She has the body for fashion – she just needs to take advantage of that.

In the culinary comedy “Julie & Julia,” Amy Adams reunited with Meryl Streep, her co-star from “Doubt.” Although Adams is an accomplished actress in her own right, she is reportedly unable to keep up with Streep. A.O. Scott of The New York Times made the claim in his review. “Ms. Adams is a lovely and subtle performer, but she is overmatched by her co-star and handicapped by the material,” he wrote. We choose to believe that the material she was working with was to blame.

Amy Adams wore this pearl grey J. Mendel Spring 2011 floaty dress, which featured a pleated V-neck and a silver beaded belt, to the premiere of “The Fighter.” She accessorized with red satin Brian Atwood pumps. We think that this color totally washes her out. She needs to wear a bit more color so that she doesn’t end up fading away. Also, the heels aren’t a great contrast with the dress.

2010 was a rather exciting year for Adams. She gave birth to her first and only child, daughter Aviana Olea. She also had a role in The Fighter,” alongside Mark Wahlberg. She played his aggressive and gritty girlfriend, Charlene Fleming. She won acclaim for her performance. According to Joe Morgenstern of Wall Street Journal, she’s “as tough, tender, smart and funny as she was ethereal and delightful in Enchanted. What an actress, and what range!” For her role, Adams was nominated for the BAFTA Award, Broadcast Film Critics Association Award, two Screen Actors Guild Awards, a Golden Globe and an Academy Award for Best Supporting Actress.

“The Fighter” star wowed at the Screen Actors Guild Awards in this white, vintage-inspired Hervé Leroux gown, which featured a halter neckline, and accessorized with a pair of deco, jeweled earrings. This is one of our favorite looks on her yet. We can’t take our eyes off of her. This dress shows off her figure and it does it in the classiest way possible. We need to see more of this from her on the red carpet!

Amy Adams didn’t have an especially busy year in 2011 career-wise. She starred in the Disney film “The Muppets,” alongside Jason Segel. The film was a huge success. It garnered acclaim and it topped the box office. According to Adams, Kermit the frog was the reason that she decided to sign onto the film. “Kermit gave a personalized message and it really moved me. I grew up with The Muppets, so I couldn’t say no,” she said.

Amy Adams looked absolutely lovely at the premiere of “On The Road.” She wore this strapless floral Dolce & Gabbana ‘Sera’ dress with yellow diamond drop Bulgari earrings and black Roger Vivier ‘Cage’ strappy sandals. This is a unique look on the Oscar-nominated actress. The skirt definitely gives off a ‘50s vibe, but the rest of the dress is very modern.

2012 was another busy year for Adams. She had roles in “The Master,” “Trouble with the Curve” and “On the Road.” In “The Master,” she gave one of her strongest performances to date. She played Philip Seymour Hoffman’s character’s ruthless and manipulative wife in the film. According to Peter Travers of Rolling Stone, she “deserves serious award attention for the subtle authority she brings to this so-called dutiful wife.” Her performance garnered her another Academy Award nomination, as well as a BAFTA and a Golden Globe nod; however, she didn’t win any of them.

At the Critic’s Choice Awards, the Oscar-nominated actress wore an asymmetrical white top transitioned to a regal blue flowing skirt, which featured a knee-high side slit. She paired this with Jimmy Choo peep-toe pumps and Stephen Webster jewels. We like the ensemble. It is effortlessly chic. She definitely has a lot more poise on the red carpet these days. When she was younger, she seemed uncomfortable.

Amy Adams gave another Oscar-worthy performance in 2013. She starred in “American Hustle,” alongside Christian Bale, Bradley Cooper and Jennifer Lawrence. Peter Travers of Rolling Stone considers this one of her strongest performances. “Adams, decked out in boob-baring Seventies fashions, owns the role. Whether putting on a Brit accent to fool a mark or showing the emotional toll of trying to fool herself, Adams scores a knockout. With four supporting-Oscar nominations (Junebug, Doubt, The Fighter, The Master), Adams fully earns the spotlight she inhabits here,” he wrote. Sadly, she didn’t end up taking the Oscar home.

Amy Adams owned the red carpet at the 2014 Palm Springs International Film Festival Awards Gala in this Juan Carlos Obando Spring 2014 halter dress, which featured polka dot print with a black waistband. She accessorized with Cartier jewels and Casadei nude pumps. This is probably one of the most stylish dresses that she’s ever rocked on the red carpet. We better see more of this next year!

The Golden Globe-winning actress has come a long way fashion-wise and career-wise. Although she hasn’t taken home an Academy Award (yet), every year she scores another Oscar-nominated role. So far this year, she’s been nominated for a Golden Globe Award for Best Actress for her role in Tim Burton’s film “Big Eyes.” There’s a lot of buzz around her performance, which means we might see her at the Oscars this year. After five Academy Award nominations, we really think she’s due for a win. 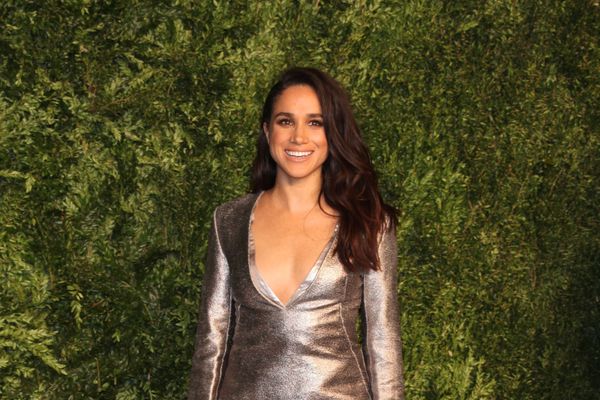