Katie Holmes has been a fan-favourite in the spotlight since her teen years and we’ve watched her flourish from rocking tomboy chic on the red carpet to the style icon she is today. From her days on Dawson’s Creek, to her peak years with Tom Cruise and her life post-divorce, Holmes has definitely had many milestones of her life showcased for the world to see, and along with that comes plenty of of fashion hits and misses. Despite her many life chapters, Holmes’ core style seems to have remained quite consistent and often features clean lines, bold colours and simplistic detailing. The star constantly exudes elegance and focuses much of her attention on extravagant smokey eyes and bright lips rather than highly embellished dresses. Holmes is so naturally stunning that she doesn’t need excessive adornment to look chic and polished. Watch Holmes transform from the casual girl-next-door to a style connoisseur as we track her fashion evolution starting back in 2002.

During her Dawson’s Creek days, Katie Holmes was the ultimate girl-next-door as she took to the screen as Joey Potter. The star was just 19-years-old when she first starred on this hit series and her youthfulness is clear in her decision to opt for casual boot-cut jeans at the MTV movie awards in 2002. Despite the laid-back vibe of the low rise jeans paired with a basic black T-shirt and simple chain necklace, Holmes still looks gorgeous and confident posing at one of her first Hollywood events.

Holmes amped up her formality by donning a feminine dress to the 60th anniversary party for Seventeen Magazine, but we can’t say that this look is particularly flattering on the gorgeous starlet. The chocolate brown colour does not emphasize her complexion well and the shape of the dress highlights her hips rather than her waist with the black cap detailing. With this look, we applaud her for the delicate half-up hairstyle and minimal makeup which rings true to her classic girl-next-door style from the early 2000s.

In 2007, Holmes became A-list star Tom Cruise’s wife and her style shifted alongside this monumental milestone. She appeared at the AFI Opening Night for “Lions For Lambs” donning an elegant one-shoulder black silk gown. A dress like this may be difficult for some to pull off because of the intricate layering, but Holmes’ height and frame allowed her to look absolutely stunning in a shape like this. She paired the jet black gown with delicate hoop earrings and pulled her hair back into a sleek bun. This was definitely a pivotal moment in Holmes’ style evolution and it is clear she is starting to grow into the classy and simplistic style icon we know her as today.

When Holmes took to the red carpet with a fresh cropped hair style and posh navy dress, it was clear that she had completely shed her previous girl-next-door image. During her Tom Cruise days, Holmes’ style stepped up quickly and dramatically as she accepted her new A-list luxury status. She began to experiment with cutting edge trends and was spotted in the front row of fashion events with Victoria Beckham and at elite red carpet events in Paris. Her super chic wardrobe reflected her new lifestyle, but there was a hint of inauthenticity to it that eventually came full circle when she reverted back to her original style after her divorce. Despite the motives behind her new look, we think Holmes looked stunning in this body-hugging dress and her innate elegance clearly never left.

Exuding a strong confidence and grace, Holmes took to the Emmy award show in a minimal yet bright cobalt blue gown. The sleek design had no wild embellishments or intricate ruching but we love how graceful Holmes looked in this simplistic style. Holmes doesn’t need much embellishment to look stunning and the bright colour and delicate belt alone do wonders on this lovely brunette actress.

In one of her most notable fashion moments to date, Katie took to the red carpet for the first time after her divorce from Tom Cruise in a wispy Calvin Klein gown. She looked absolutely angelic in this simple halter gown and the star’s utmost confidence made it clear she was back and better than ever after taking time away from the spotlight. Her pouffed updo is feminine and clean looking and pairs perfectly with the simple neckline and whimsical layers of the ivory gown.

In another post Tom Cruise look, Katie exudes a playful yet elegant image from her younger days. The bright fuchsia dress rings true to her simplistic style with minimal adornment, but this bold colour definitely turned heads on the red carpet. The thigh-skimming gown with a high neckline is ultra flattering on Holmes’ slender figure. Her hair has grown out at this point to a shoulder length cut which is tied into a romantic side ponytail and her makeup is glowy and light.

The common trend of Holmes’ wardrobe and fashion decisions became apparent at the Golden Globes award show in 2015. The star gravitates towards simple shapes with minimal embellishment, but never fails to rock a bold, solid colour like the star she is. Take this look for example – Holmes looked polished and chic in this understated plum-coloured strapless gown. The simple waist line ruching was just enough to flatter her shape without looking overly extravagant. Her slick side ponytail and sultry smokey plum makeup topped the look off so well she didn’t even need a necklace to stand out!

The pant suit Holmes wore to the Chanel Tribeca Film Festival in 2016 once again rang true to her signature minimal but elegant look. The super high-waisted pants made Holmes’ legs look even longer than they already are and the simple black chiffon top allowed the pattern of the pants to really shine. Since the grey and black monochromatic ensemble may seem slightly plain on its own, Holmes added a statement baby pink bag that really popped against the dark colour palette. Her natural waves fell loose around her shoulders and Holmes totally killed this style moment in our books!

In one of her most polished looks to date, Holmes stepped out on at the Metropolitan Museum of Art Costume Gala this past year in a stunning midnight blue Zac Posen gown. Despite the event’s reputation for attracting extravagant gowns, Holmes stuck to her classic roots with an understated yet elegant off-the shoulder number. The mermaid-cut style looked super flattering on Holmes and the ruffle detailing on the shoulders and on the train were fabulous additions for extra flare. This look was actually quite out of the box in comparison to some of Holmes’ more simple previous styles, so it is clear she adapted to the theme of the event but not without her signature simplistic twist. Holmes’ sleek low-bun, thick diamond necklace and drop style earrings perfected the entire look. 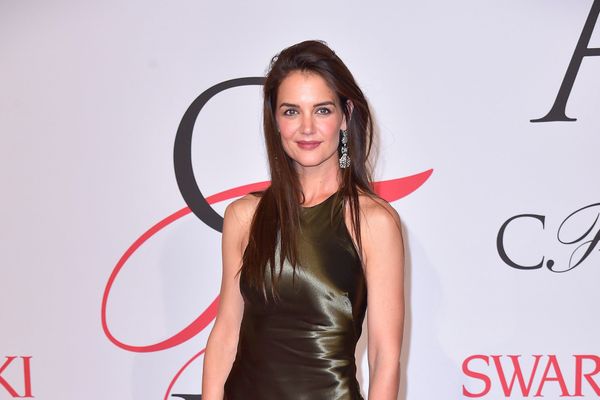