Following the tendency of many stars during their initial debut on the red carpet, Naomi Watts fell victim to a few fashion mistakes during her early years in Hollywood. Despite the occasional fashion blunder, her style evolved significantly over the years into the mature and elegant signature look we know her for today. Her classic cropped blonde tresses always look flawless and her many best dressed gowns quickly turned her from an unknown Australian actress into a style icon. Her grace and confidence on the red carpet really make her stand out as the movie star she is. Watch Naomi Watts transform from an inexperienced newbie to a red carpet vixen throughout the years in our Fame10 fashion evolution:

Watts made her debut on the red carpet in 2003 at the premiere of Le Divorce in a knee-length blush pink gown. Despite the film taking place in Paris, one of the world’s fashion capitals, Watts definitely did not pick up on fashion clues while filming. The gown had confusing details that did not flow together, including buttons that lined the front of the dress, adding an inappropriate casual vibe to the look. The button embellishments were also mixed with bust and waist ruching, which the did not play well off each other. The texture of the gown seemingly resembled lingerie and the colour washed out her complexion. This moment was definitely not one of Watts’ finest in the fashion department.

During one of her earlier red carpet debuts, Naomi Watts appeared on the red carpet wearing an awkwardly shaped knee-length dress. The neutral colour of the dress definitely flattered Watt’s tan complexion and blonde locks, but the details of the dress drastically held this look back. The shape of the skirt had unsightly bubbles that seem completely unnecessary and the chunky belt took away from the delicate simplicity the dress could otherwise have. Her shoes also seemed slightly too coordinated by playing off the nude and black on her dress. We would have preferred a solid colour shoe that was less distracting.

In 2007 Watts stepped out in yet another “almost there” fashion look. This silk sapphire blue dress complemented her complexion beautifully, but the shoes were an obvious mistake. The cork wedge changes the entire vibe of the outfit from that of a classy gown to a backyard BBQ type look. Rather, Watts should have tried a simple nude sandal to change the focus of the look from the chunky shoes to the graceful shape of the silk gown.

Of all of Watt’s fashion moments, her Marilyn Monroe inspired ensemble seems to be the first memory many people conjure up. Although Watts nailed Marilyn Monroe’s look head on- complete with old Hollywood waves, a simplistic white gown and her signature red pout – the look came across more theatrical than a respective best-dressed ensemble. Instead of trying to identically mimic Monroe, Watts should have tried to add her own twist on this iconic style and made it her own.

Noami Watts appeared at the premiere of Salt in a sleek sparkly number by Gucci. She looked super contemporary with a blunt straight hair style and smokey eyes, but the shape of the dress fell short of our expectations. The texture seemed awkward and unflattering while the shoes matched almost too perfectly for the entire ensemble to work together. We would have preferred Watts in an elegant or layered gown that she became known for in her later years and a pop of colour on her shoes would have worked better to break up the monochrome colour palette.

London Premiere of The Impossible — 2012

Watts took to the red carpet at The Impossible premiere in a unique jet black dress unlike any we have seen before. Although we appreciate the risk Watts took with the nontraditional shape of the dress, we’re not totally convinced that it was the most flattering. She seemingly resembles a bat with the exaggerated bell sleeves that are actually longer than the dress itself. The open-back concept is the one thing we did love about this dress. The backless gown paired with her smoothly swooped updo looked very ladylike and refined, even when contrasted against the unsightly flare sleeves! Her look is definitely in transition in this phase of her fashion evolution and we can see hints of the elegance and confidence she would later become known for.

Naomi Watts’ first standout fashion moment occurred in 2010 at the People’s Choice Awards. Watts looked flawless in a black Alexander McQueen gown with a glittering gold bodice. The slim fit dress hugged her body perfectly as she elegantly floated across the red carpet. The open back and revealing sides showed just enough skin to be sultry but not overly exposed. Her side swept hair and rosy complexion complemented the ensemble perfectly and we applaud Watts for the simple yet glamorous look that landed her on many best dressed lists in 2013.

Channeling classic Hollywood glamour, Watts graced the red carpet in an off the shoulder dusty blue number by Marchesa. The gown featured icy blue diamond embroidery at the waist and neckline and the bodice ruched perfectly to flatter her figure. The flowing train, which cascaded into layers starting at her waist, made the whole look even more elegant. The one-shouldered gown was balanced by a side-swept hair style and she topped the look with a glittering clutch and crystal necklace.

Watts took to the 88th Academy Awards in a mermaid-inspired Armani Prive gown which was covered in thousands of glittering sequins. A scalloped pattern layered down the entire gown and the multi-colour ombre fade from midnight blue to burnt purple on the bodice was super flattering to highlight her tiny waist. We loved that this dress was unique enough to make Watts stand out without going over the top with an extravagant design. She looked sleek and glamorous, especially with her diamond cuff necklace and bold plum-coloured pout.

In another recent fashion moment, Watts took to the Cannes Film Festival in France donning a lilac Armani Prive column dress covered in chunky crystal embellishments. Again, this dress appears slightly risky when it comes down to pattern and colour, but Watts pulls it off flawlessly and stunned on the red carpet. The strapless gown hugs her body perfectly and cinches at the waist to highlight her slender figure. The subtle pleat details trailing down the dress are super flattering and the metallic embellishments add a unique touch to an otherwise quite simple gown. Her fuchsia coloured diamond choker also stole the show and perfectly ties in to the lilac shade of the dress without being overly matchy. It’s clear that by 2016 Watts truly knows what works for her body yet still takes risks when it comes to fashion which definitely makes her stand out as a style icon on the red carpet. 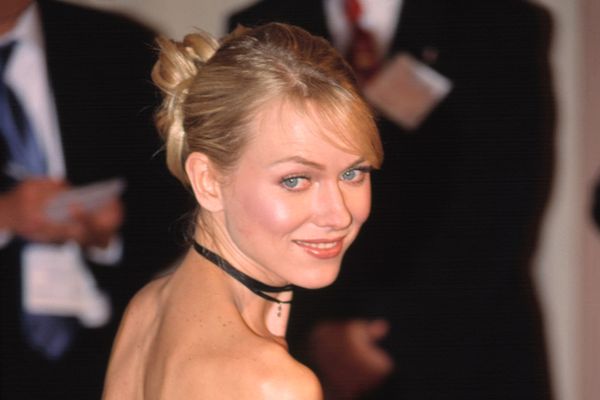