Natalie Portman is a longtime role model to us all, partly because of her ethereal fashion sense, but also due to the brains behind her beauty. Unlike many acclaimed celebs, Portman briefly set her acting career on the back burner to get a degree at Harvard. We love that Portman is a triple threat of brains, talent and beauty and that her chic and polished fashion sense is simply the cherry on the cake to her entire persona. Portman rarely disappoints on the red carpet and has proven to take risks that always end successfully. Her petite and ballerina-like frame was made for fashion and has caused designers to flock towards her requesting to don their latest creation. Follow along for Portman’s style evolution throughout the years — from her early teenage roles, to her Black Swan debut and even her iconic maternity style:

Similar to other celebrities who appeared on the red carpet at a young age, Portman definitely had a few red carpet misses during her early years in Hollywood. At just 15 years old, Portman stepped out at the Mars Attacks! premiere wearing an entirely emerald green ensemble. It’s clear that her youthful complexion is still elegant and beautiful even in her early teens, but we unfortunately can’t say the same for this monochrome color palette. Hopefully we can write off this Mr.Grinch-inspired outfit to Portman simply being young and naive.

Portman stepped out at a Los Angeles premiere in 2003 donning a more mature style, but still an unlikely combination in comparison to her current elegant and timeless fashion sense. The mid length tulle skirt and sheer bustier revealed a silk layer of wrinkles and bumps underneath that was quite unflattering on Portman. The star has become iconic for groundbreaking hairstyles, but we can’t say this raven-colored bob with a thick bang flattered Portman’s delicate features in the best way possible.

In contrast with her awkward first appearances, Portman stepped out at the Vanity Fair post Oscars party in 2005 in a delicate and jaw dropping charcoal colored dress with metallic waist detailing. The star looked romantic in the whimsical design, but the look definitely had an edge of fierceness as well as a deep plunging neckline. Portman looked full on Greek goddess with this dress and the bedazzled hairpiece complimenting her soft updo undeniably pulled everything together.

When Portman stepped out at the 2006 Golden Globes with a recently shaved head for her role in V for Vendetta, heads turned for all the right reasons. In addition to her fresh hairstyle, Portman rocked a lacy black number that looked super elegant and sleek. The scalloped, sweetheart neckline was ultra flattering and highlighted her chiseled shoulders and petite frame. The black embellished belt accented her tiny waist and the timeless feel of this vintage Chanel classic turned this into a defining style moment in Portman’s fashion evolution.

In a coincidental act of foreshadowing to her future role in Black Swan, Portman stepped out at a 2008 AMFAR party donning a ballerina-inspired white frothy gown. She showed off just how well she can pull off a tutu with this ruffled Givenchy creation and took a fashion risk that undoubtedly landed her on plenty of best dressed lists in 2008. The star channeled her inner avant-garde side with this one shoulder, winged neckline creation and displayed a structural fashion masterpiece. Although we haven’t seen her in something this bold since 2008, this risky fashion moment definitely proved Portman to be a fashionista in the making.

Just like in her hit film Black Swan, Natalie Portman showed off her demure and fiery side in a cherry red Rodarte gown at the film’s Venice premiere in 2010. The gown boasted flattering draping and pleating along the bodice, in addition to Swarovski jeweled embellishment along the neckline and waist. She pulled her hair into a polished braided updo and skipped on jewelry by instead opting for a pearly-colored clutch and shoe combination. Portman is at the point in her style evolution where she realizes what works for her, and by keeping the embellishment minimal it’s clear she has achieved a defined sense of her own personal style.

Proving her to be the queen of flattering maternity fashion, Portman stepped out in a fuchsia off-the-shoulder gown at the Academy Awards in 2011 where she won the Best Actress award for her role in Black Swan. Once again, the star opted for Rodarte who actually designed the extravagant costumes the ballerinas wore on screen in the film. The deep purple gown featured subtle sparkle detailing along the neckline and pleats cascading over her growing pregnancy belly to flatter her bump in the cutest way possible. Portman without a doubt glowed the entire night – from winning the Best Actress award to gracefully awaiting the arrival of her baby!

Portman appeared at the Thor: The Dark Kingdom premiere in Germany wearing a bridal-inspired gown from one of her most beloved designer brands, Christian Dior. The gorgeous ivory strapless gown was extremely minimal, but the Princess style cut of the dress amped up the glam factor of her look. The gown featured a lightly pleated full skirt and a black satin ribbon detail to flatter her waist. Portman also featured a Dior black clutch and simple earrings while sweeping her hair into an elegant chignon. It’s clear that Portman has mastered her red carpet style and whether keeping it simple or extravagant, she continues to land on best-dressed lists everywhere and leave us speechless with her timeless style.

In one of her most stunning looks to date, Natalie Portman descended upon the Toronto International Film Festival wearing a draped, blush gown entirely covered in lace. The Grecian-inspired number was designed by Lanvin and featured an eye-catching star-shaped brooch to accentuate the one shoulder detail. Portman made her appearance at the festival for her writing and directing of A Tale of Love and Darkness proving that once again she is both a brain and a beauty. The elegant, slicked ponytail allowed her diamond earrings and bright magenta lip color to really shine. Portman killed this red carpet style moment and defined herself as the elegant fashionista and intelligent young woman she is.

Natalie Portman radiated in a bright yellow gown at the 2017 Golden Globes in yet another iconic maternity style moment. The star was nominated for her portrayal of the late first lady, Jackie Kennedy, and channeled the icon herself with the 1960’s inspired Prada garment. The dress featured an embellished hem and a quarter-length sleeve which kept the look appearing tailored to flatter her growing baby bump. The star also donned Tiffany & Co. jewel earrings and a ring set which totaled over $200,000 in addition to a vintage diamond bracelet which she revealed was from 1910. The simplistic design of the dress, her polished updo and minimal embellishment proved she knows exactly how to rock maternity style, and all style for that matter, in the absolute most flattering way possible! 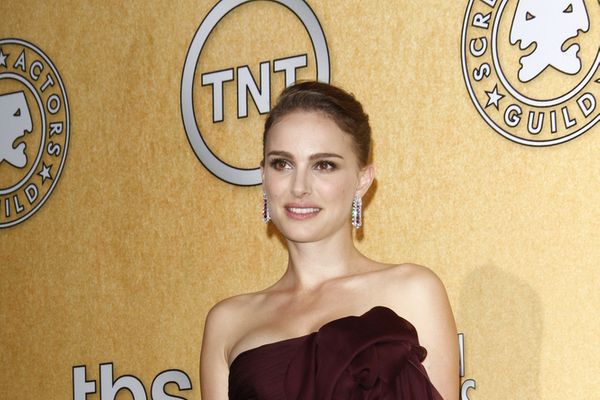