It’s hard not to love Rachel McAdams. She is so pretty, so sweet and so very talented. She’s also the sort of the woman that most people could be friends with. She’s been acting for a number of years now and while we once expected her career to reach great heights, we now know that she’s actually really low-key and would much prefer not to be a big movie star. McAdams turned 36 earlier this week, so we figured now would be a good time to check out her fashion evolution. From what we’ve gathered so far, she’s not big into fashion, so this will be definitely be interesting!

Rachel McAdams looked quite lovely at the premiere of “Red Eye.” We love how her hair was styled with the two braids and the big pink flower at the back. The white dress is nice, but it feels like more of a prom dress. The heels that she matched with the outfit are great though. They are nice and pink, just like the flower in her hair!

Rachel’s career was on fire in 2005. The year before, she had starred in two uber popular films, “Mean Girls” and “The Notebook,” which brought her international recognition, so 2005 was a continuation of that success. She co-starred in the romantic comedy “Wedding Crashers” with Owen Wilson, Vince Vaughn and Bradley Cooper, as well as the thriller “Red Eye, which won her rave reviews. Roger Ebert commented that “she brings more presence and credibility to her role than is really expected; she acts without betraying the slightest awareness that she’s inside a genre. Her performance qualifies her for heavy-duty roles.”

“The Notebook” star looked radiant at the Hollywood Film Festival Gala in this black and white patterned dress. We love how this dress goes in at waist and then flares out around the hips. It works so well on her figure. Also, we love her as a blonde. No other color works on her quite like this. Dark brown is a close second, but blond wins every time!

It was around this time that Rachel McAdams and Ryan gosling began dating. They met on the set of “The Notebook;” however, it took a couple years after filming for them to actually hook up. Gosling has stated that they had a rather combative relationship on set. “We inspired the worst in each other. It was a strange experience, making a love story and not getting along with your co-star in any way,” he said. At least it worked on-screen. Their chemistry was electric.

Rachel McAdams arrived at the premiere of “Married Life” wearing this tri-colored Gucci Resort Collection dress. We love how she’s matched her lipstick to the dress’ waistband. The one thing we don’t like about this outfit are the open toed heels that she accessorized with. We would have much preferred something close-toed since the dress is so bold.

McAdams’s career was on fire all through 2005. She was hailed as “the next Julia Roberts” and the new “Hollywood It girl.” In 2006, she did something really unexpected – she took a yearlong break to clear her head. “There were a lot of cooks in the kitchen, a lot of voices around me, and I wanted to step away so I could hear my own voice again,” McAdams later said. “Truthfully, I never really wanted to be a big movie star. I never even wanted to work outside of Canada, or outside of the theatre.”

The “Mean Girls” star didn’t look her best at the premiere of “The Time Traveler’s Wife.” She wore this white ruched Emilio Pucci Resort 2010 dress, which featured a deep plunge at the chest, with black patent Christian Louboutin Pigalle heels. We really don’t like anything about this look. The deep plunge was a bad idea and it looks like the dress has ‘80s style shoulder pads – ick!

In 2009, Rachel McAdams had returned to acting. She starred opposite Eric Bana in “The Time Traveler’s Wife,” a film adaptation of Audrey Niffenegger’s novel of the same name. The movie received mixed reviews, with some critics claiming that her skills were wasted in this role. That same year, she also had a role in “Sherlock Holmes” opposite Robert Downey Jr. and Jude Law. The movie was a commercial success; however, some critics didn’t think her character was well integrated into the story.

Rachel McAdams attended the premiere of “Morning Glory” in this grey ruched strapless Lanvin Spring 2011 dress and Lanvin leather-strapped fishnet and mesh heels with a Lucite wedge. We think she looks lovely, but we’re not 100 percent sold on the dress. We kind of wish that it were a bit shorter, perhaps above the knee.

“Morning Glory” is the second movie that McAdams co-starred in with Diane Keaton. The first was “The Family Stone.” Although the film received mixed reviews, critics were impressed with McAdams. Manohla Dargis of the The New York Times wrote, “Ms. McAdams plays her role exceptionally well: as the young actress on the verge of the big time, who can win the boy, tame the beast, flash her panties and make you smile without making you cringe, she is a natural.” Unfortunately for McAdams, the film was unable to find a larger audience and ended up only having modest box office success.

Premiere of Sherlock Holmes” A Game of Shadows – 2011

The Canadian actress looked beautiful at the premiere for “Sherlock Holmes: A Game of Shadows” in this embroidered Marchesa Resort 2012 gown, which featured long sleeves and a cowl back. She completed the look with glittery Christian Louboutin ankle boots and Jacqueline Nerguizian jewels. We haven’t seen her looking this lovely in a while!

Critics weren’t too crazy about Rachel McAdams’ role in the first “Sherlock Holmes” film; however, it had less to do with her abilities as an actress and more to do with the limitations of the script itself. According to Variety, her character was “not very well integrated into the rest of the story, a shortcoming the normally resourceful McAdams is unable to do much about.” In the film’s sequel “A Game of Shadows,” her role was much smaller, but it gave her the opportunity to do a lot more because she’s not Robert Downey Jr.’s love interest and is instead just a villain.

Premiere of Journey 2: The Mysterious Island – 2012

Rachel McAdams showed up at the premiere of “Journey 2: The Mysterious Island” in a sheer electric blue knit tee and a vibrant floral print maxi skirt, which featured a thigh-high split. She accessorized with a blue snakeskin clutch and black Jimmy Choo ‘Anouk’ pumps. We love this look on her. It is much more stylish and age appropriate than a lot of the things she usually wears on the red carpet.

We’re not sure why McAdams attended the premiere of “Journey 2: The Mysterious Island.” She wasn’t in the film and neither was her boyfriend at the time Michael Sheen. These two had started dating in 2010 after meeting on the set of Woody Allen’s film “Midnight in Paris.” They dated for about two years and broke up rather suddenly in 2013. Rumor has it that the relationship ended because Sheen wasn’t interested in marriage or children and McAdams was.

The “Morning Glory” star attended the premiere of “The Vow” in this mint-green cocktail dress by Vivienne Westwood. She completed the look with gold-and-diamond-encrusted necklaces by Pomellato, a Christian Louboutin embroidered clutch and Christian Louboutin nude ‘Pigalle’ pumps. It is hard to tell how we feel about this dress because we’re distracted by her fringe bangs.

While the critics usually love Rachel McAdams, they weren’t really sure why she chose to star in “The Vow.” The Los Angeles Time felt that the film didn’t put her skills to good use. The reviewer claimed that “she is such an appealing actress that it’s hard not to wish someone could make better use” of her. We totally agree. McAdams is way too talented to waste her time with silly romantic comedies. We wonder what possessed her partake in this film. She was probably offered a really big paycheck.

Rachel McAdams looked stunning at the premiere of “About Time” in this light lavender-colored Roksanda Ilincic Resort 2014 ensemble, which featured a long-sleeved top and full-length skirt with a hologram belt. She completed the look with Casadei shoes, Michael M. Collection earrings and a Norman Silverman ring. We’re not entirely sure how we feel about the hair color. She just looks so much better as a blond!

“About Time” was Rachel’s second film about time travel, “The Time Traveler’s Wife” being her first. Zooey Deschanel was actually supposed to star in this film; however, she ended up dropping out shortly before filming began, so McAdams was hired to replace her. While critics were impressed with her chemistry with Domhnall Gleeson, asserting that it helped to keep the film afloat, many weren’t that impressed with the movie itself. Some claimed that the plot was a little too much that of “Groundhog Day.” 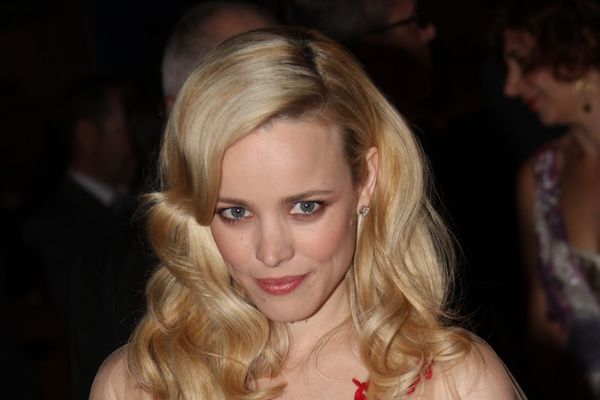