Sienna Miller seems to get fashion. Unlike a lot of other starlets her age, she never had a period in her career where she dressed like she didn’t have a clue. From the very first time she stepped onto a red carpet, she understood what she was doing and how she was dressing. She doesn’t always make great decisions though. She’s gone through some pretty dark moments fashion-wise since she first launched her career; however, she has seen it through to the other side. Because she is currently undergoing her own fashion renaissance at the moment, we figured that now would be a good time to take a look at her fashion evolution.

Sienna Miller began her career in Hollywood as Jude Law’s arm candy. Here she is with him at the 76th Annual Academy Awards. She’s wearing an emerald green dress by Matthew Williamson, which features some gold detailing and a structured bodice. She accessorized with gold earrings and a gold cuff on her arm. Even then as her career was just starting to take off, she knew how to dress. Many other starlets her age would never have been able to pull something like this off.

One of her best accessories that night was Law. He was up for an Academy Award that night for his performance in “Cold Mountain.” These two met on the set of “Alfi.” Soon after filming ended, they embarked on one of Hollywood’s most infamous on-again, off-again relationships. “I’m really not happy talking about our relationship,” Miller said soon after they began dating. “”It all seems so mad at the moment.”

The budding actress showed up at the premiere of “Casanova” in black skinny pants and a strapless black top. She accessorized with a black pair of pumps, gold earrings, gold bangles and a beige clutch with gold trim. This isn’t one of our favorite looks. The top is so low that it looks like it might fall down. We do like her crop cut though – it is very chic.

Sienna Miller and Jude had hit a rough patch in 2005. He was caught cheating on her with his children’s nanny, so she moved out of their Notting Hill flat and ended their engagement. He came crawling back though, begging for her forgiveness. At the premiere of “Casanova,” they were well on their way to mending their relationship. When the Associated press asked her if they were back together, she responded with, “Well, it’s pretty obvious, isn’t it?”

At Marchesa’s 2nd Anniversary Party, Sienna Miller looked super glam. She rocked this cream-colored Marchesa cocktail dress, which was pretty near perfect – it showed off her svelte figure, as well as her long lean legs. When we see her dressed like this, it is pretty easy to remember that she began her career as a model.

Miller and Law were still trying to rekindle their romance at this point; however, they weren’t having a lot of luck. After his affair with his children’s nanny, she had reportedly had a brief affair with Daniel Craig, her co-star from the movie “Layered Cake.” Law and Daniel had been friends for many years; however, after his affair with Miller, we’re not sure if these two remained on good terms. By the end of 2006, Miller and Law finally gave up trying to repair their relationship and went their separate ways. Most people were relieved – these two were nothing but drama together.

The “Casanova” star looked gorgeous in this gold and white Chanel dress at the 12th Annual Critics Choice Awards. She accessorized with a gold clutch and gold accessories. Again, she just gets fashion and she knows how to wear it. She makes walking the red carpet look effortless, which is a skill, something she probably picked up when she was modeling.

At this point, Sienna Miller was becoming better known for her turbulent personal life than for her professional accomplishments. She and Law were finally over at this point; however, she was better known for her on-again, off-again relationship than for her movie career. “I was probably perceived for a long time as someone who was just famous for…well, for a reason, but wasn’t taken seriously as an actress,” she told People magazine. “People didn’t want to pay attention to the fact that I actually took my work quite seriously.”

Sienna Miller wasn’t at the top of her game at the 23rd Annual Independent Spirit Awards. She wore this black lace Monique Lhuillier dress, which looked a bit too big. She accessorized with black strappy heels and a turquois clutch. Overall, this isn’t our favorite red carpet look on her. The dress wasn’t a hit and she doesn’t look like she tried to do anything with her hair. She’s lucky she has that pretty face!

In 2008, Miller had finally moved on from Jude Law. She was dating Rhys Ifans, who she seemed to really like. “When his name is mentioned, it makes me smile like a fool because I instantly think of him and it makes me happy,” she told Elle magazine. “He does just make me happy.” Soon after that interview, she broke up with him. She just wasn’t quite ready to settle down. We personally think she woke up one day and realized that she was way too hot for him.

The “Factory Girl” star went completely glam for the “G.I. Joe: Rise of the Cobra” premiere. She donned this gold capped-sleeved YSL chiffon gown, which was covered in sparkling beads. Everything about this look screamed vintage, from the hair and makeup to the style of the gown.

Sienna Miller has admitted that she has some regrets about doing the “G.I. Joe” movie. “It was what it was, but I compromised my own values to a certain degree and I didn’t feel good about that,” she told Time Out magazine in 2011. “I was completely out of place, like this little midget running round in black leather winning fights, which was just absurd. They did a wondrous job with my wardrobe to make me look threatening. G.I. Joe (was) a great paycheck. If, financially, I’m okay – which luckily I am – there’s no point in doing stuff that’s not right for me. It’s too much time away from home.”

In 2011, Miller had just broken up with Jude Law for the umpteenth time. They had gotten back together in 2009 and managed to make it work for a couple of years without too much drama. Once they had broken up for good, she moved on to another British actor, Tom Sturridge. These two seem really good together. We have never seen Miller so calm, centered and focused on her career. She had taken a break from Hollywood after “G.I. Joe: Rise of the Cobra” and was focused on making a comeback. ““I was sick of myself, to be honest, or sick of that perception of me,” she told Esquire in 2014.

“The Girl” star showed up at the BFI Gala Dinner wearing a white Carven dress from the Resort 2014 collection, which featured a gathered bodice and a draped skirt with pockets. She finished the look with black Christian Louboutin ‘So Kate’ heels. We’re not especially crazy about the dress and we think the black pumps were a mistake – they kind of ruin the clean look she was going for. Sigh. She isn’t quite as on with the fashion as she once was.

Sienna Miller was in the middle of a comeback in 2012. The year before, she had starred in the British television film “The Girl” as Alfred Hitchcock’s muse, Tippi Hedren. While she received mixed reviews for her portrayal of the ‘60s icon, she was nominated for her first Golden Globe for her performance. Things in her personal life were also going well. She and Tom Sturridge were engaged and they had a daughter together, Marlowe.

At the International Medical Corps’ Annual Awards Dinner Ceremony, Sienna Miller wore a sleeveless Erdem ‘Anja’ cloqué dress, which featured ornate embellishments, an organza shift panel and an angular folded neckline. She completed the look with a pair of black pumps. We love this dress on her. The only thing wrong with the look is her dull, uninspiring hairstyle. She was obviously in dire need of a haircut at that very moment.

On the plus side, as of 2014, Miller had finally resurrected her career. She was off of Hollywood’s blacklist and had scored supporting roles in a couple of films that were nominated for Academy Awards in 2015 – “Foxcatcher” and “American Sniper.” She believes that becoming a mother helped her save her career; however, we think it was her hard work and lack of partying. “I think having a baby really changed everything, if I’m honest. The stakes are higher. You have someone that you want to be proud of you eventually,” she told The Guardian. 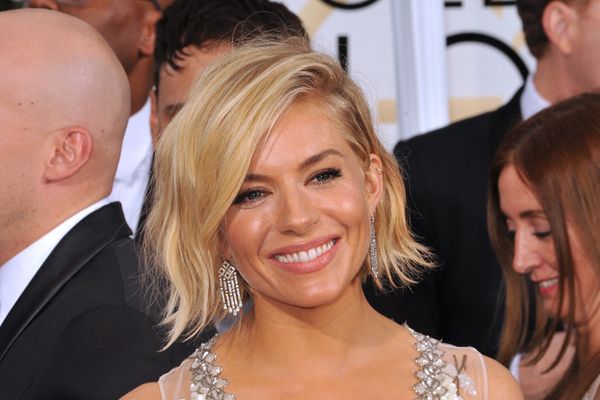