Musicians, pop stars and fashionistas brought their A-game to the 2018 Grammy Awards red carpet this year! Of all the award shows, the Grammys definitely have the biggest reputation for eccentric fashion, and this year’s red carpet definitely lived up to it’s expectation! We saw everything from tailored power suits, to sequin beading and statement shoes. Follow along as we recall 12 of the best dressed stars from last night’s Grammy Awards:

Anna Kendrick proved she is the queen of mastering a tailored power suit at last night’s Grammy awards! Her choice of suit flattered her petite figure yet still appeared masculine and sharp. We love that she added the sheer, lace bodysuit underneath to soften the strong lines of her suit and the statement pink pumps definitely brought the glitz and glamour. 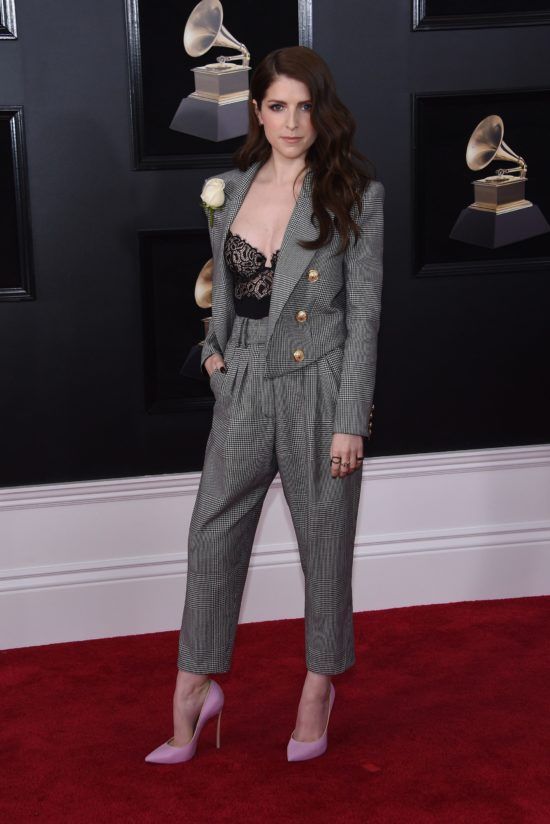 Bebe Rexha stepped out looking sleek and chic at last night’s Grammy awards! Her look consisted of a curve-hugging shape in a soft pink color that was the perfect balance of soft and sexy. We love the contrast of the bronze tulle along the bust and the gold glitter beaded throughout the gown. This subtle glittering look flattered her skin tone and made her platinum blonde locks truly pop! 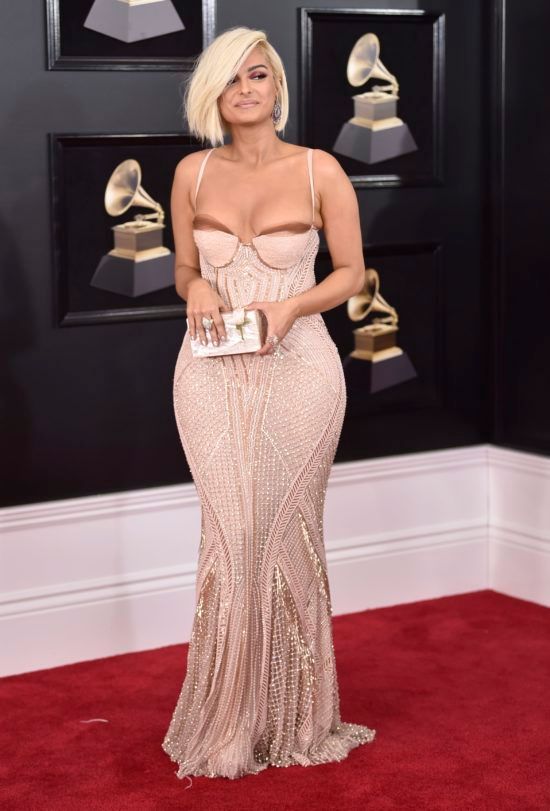 Many fashion critics were on the fence about Hailee Steinfeld’s look from last night, but we were definitely fans! If there is any way to style a statement boot like this, Hailee definitely mastered it. She rocked a crisp, white dress that featured a strategic slit down the center to show off her knee-high purple boots. She played up the bold color of her shoe with a metallic purple eye, which totally pulled the look together and made Steinfeld look radiant! 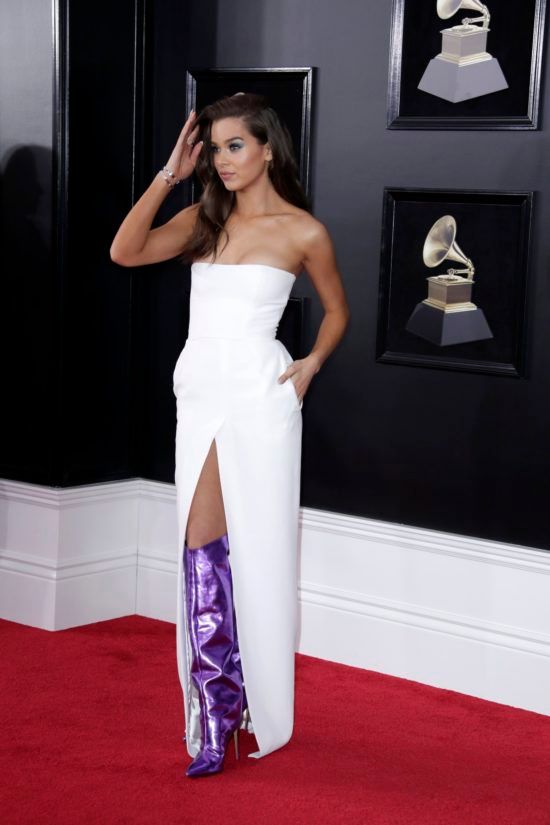 Nominated for best new artist, Ctrl singer SZA absolutely dazzled on last night’s Grammy’s red carpet! The star rocked a sheer, dramatic gown that featured intricate beading, tulle layering, and multiple thigh-high slits. The gown was definitely bold, but it hugged her body in all the right places and made her look angelic and ethereal on the Grammy Awards red carpet. 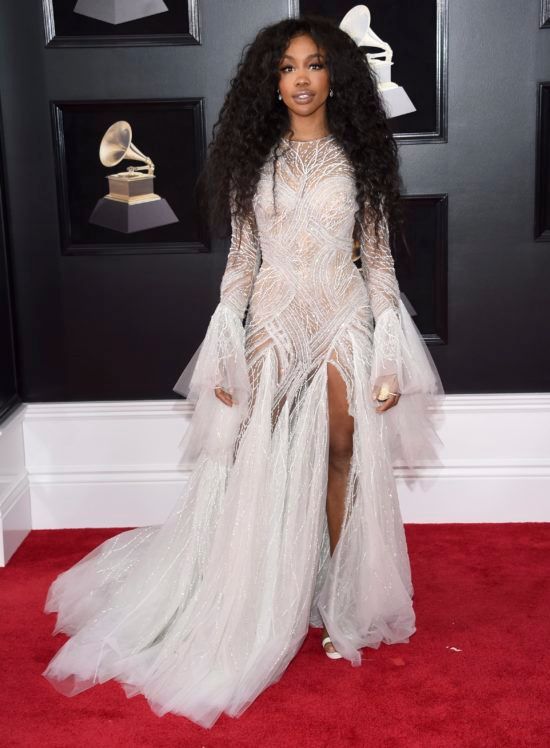 Ashanti looked radiant on the Grammy Awards red carpet last night when she stepped out wearing this golden, voluminous gown! The look flowed flawlessly as she twirled around the red carpet and made a statement in the best way possible. We love that this gown featured a subtle shimmer rather than chunky glitter or tacky sequins. 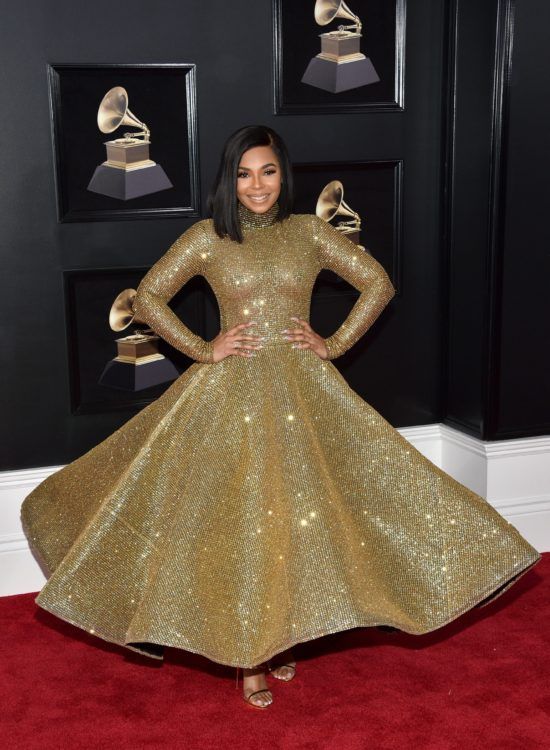 Chrissy Teigen also mastered the metallic, glitter look on last night’s Grammy’s red carpet! Her gown featured dramatic draping, exaggerated bell sleeves and a chunky belt around the waist which sat nicely on top of her budding baby bump. In combination with her radiant pregnancy glow, Chrissy Teigen definitely had all eyes on her last night! 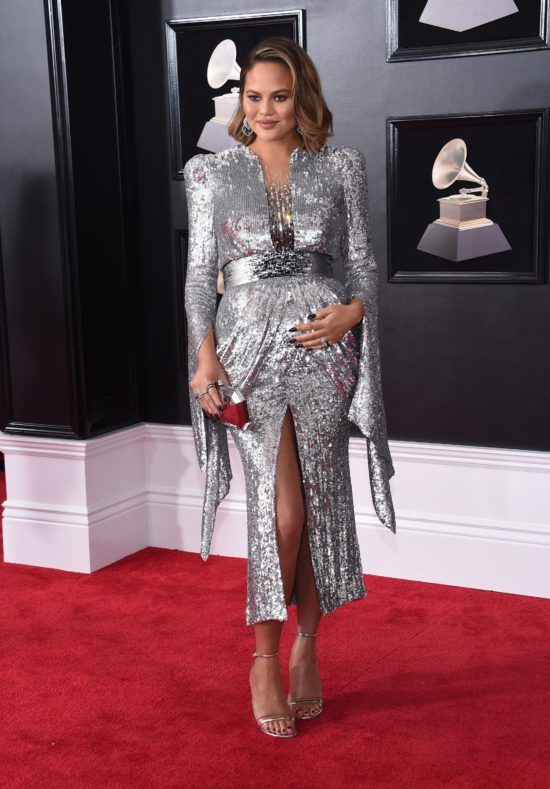 Eve rocked a glittering power suit in the absolute best way possible on last night’s Grammy Awards red carpet! Her look featured a black and silver stripe pattern that was intertwined with sparkling beading and glitter. To add some extra drama, Eve fastened her blazer with one tiny button which softened the look and added a feminine, glamorous vibe. 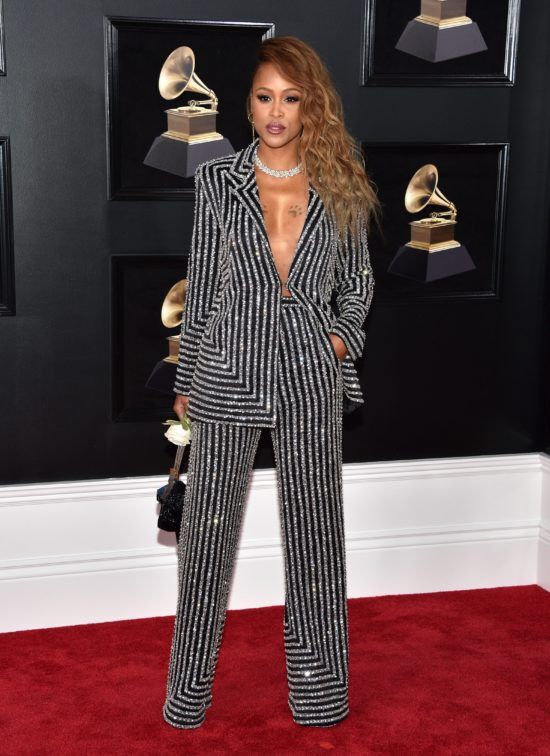 Camilla Cabello had all eyes on her last night when she stepped out in this body-hugging red number! Typically red is a difficult color to pull off and many stars tend to blend in with the iconic carpet, but Cabello found a way to stand out and shine. Her look featured flattering ruching and an exaggerated sweetheart neckline. The satin texture was rich and luxurious and she brought the glamour with her adorable disco ball clutch. 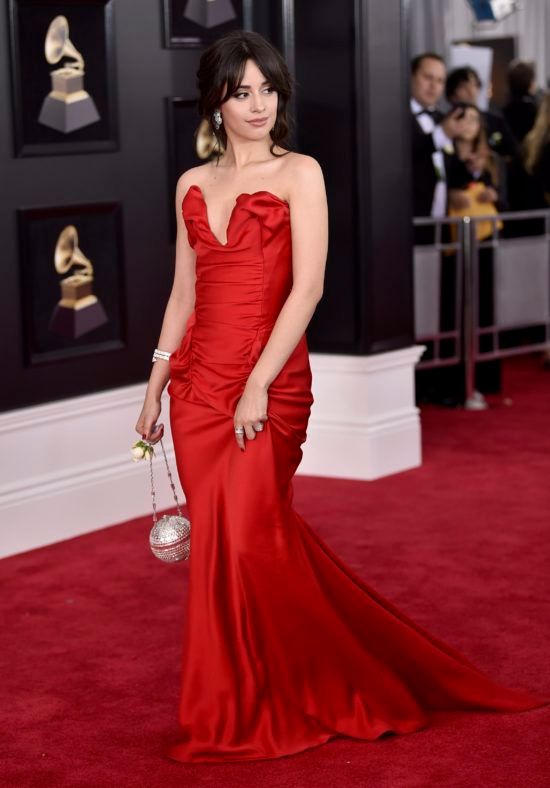 We were in awe of Miley Cyrus when she stepped out in this sophisticated jumpsuit at last night’s Grammy Awards! The confident musician has definitely gone through her fair share of evolution when it comes to fashion, but we love this newfound classy and chic version of Miley! Her black pantsuit brought the drama with its glamorous cutout neckline but was still sleek and totally elegant. 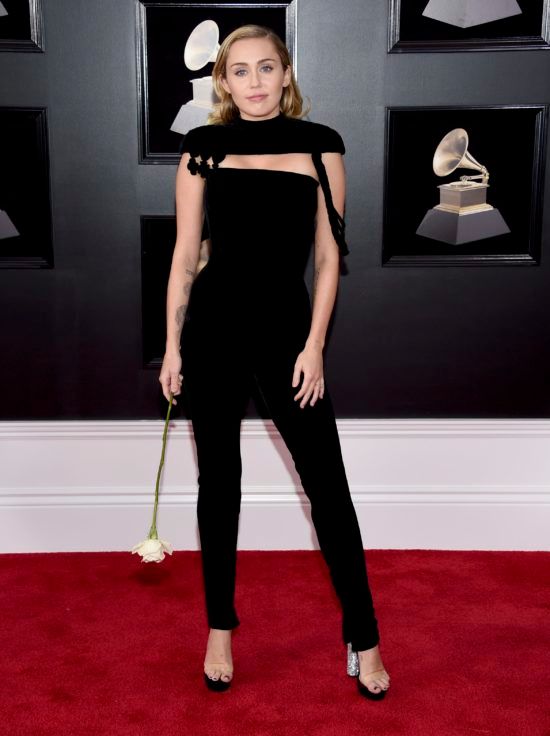 Kelly Clarkson wowed on the Grammy’s red carpet when she stepped out in this stunning golden and black number! The look featured sheer, swirling gold details that created an hourglass shape and hugged her curves perfectly. We love that this number was glamorous and timeless without being over the top! It’s a fine line that many stars struggle with but Clarkson has definitely mastered it. 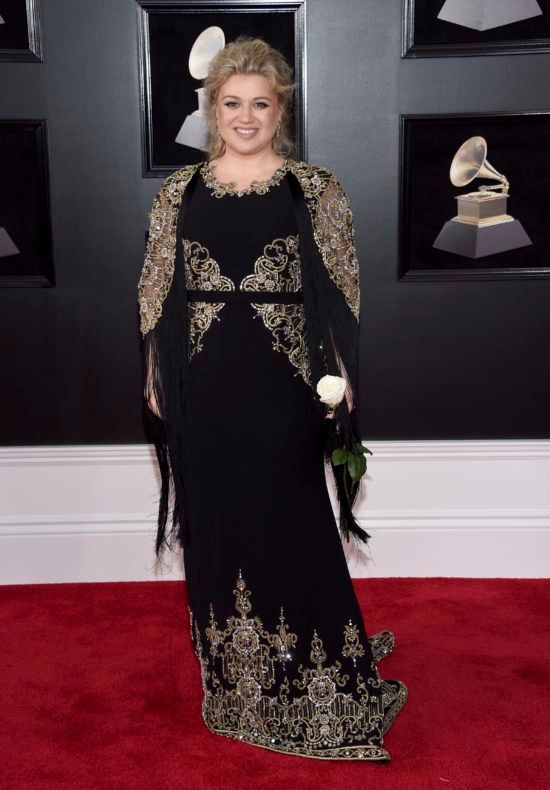 Rita Ora definitely brought the sex appeal with the sleek, black number she rocked on last night’s red carpet! Her look featured silver embellishment along the inside rather than the outside which was super trendy and unique. She channeled old Hollywood vibes with her ultra thigh-high slit and undeniably had all eyes on her as she elegantly graced the red carpet! 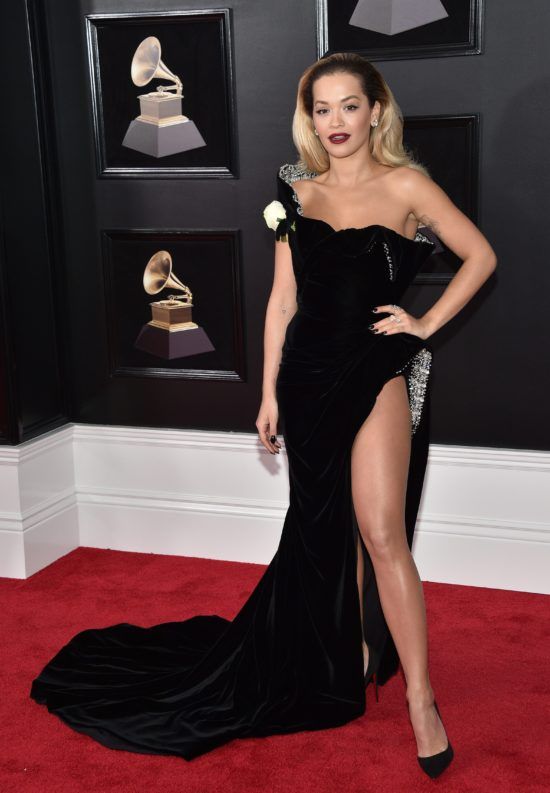 Lady Gaga is known for her exaggerated and theatrical red carpet attire, and she definitely stole the show last night in the classiest way possible! Rather than rocking something overly bold and attention-seeking, the star simply donned a glamorous black number with a dramatic train trailing behind her. Lady Gaga was most definitely the center of attention, but required zero theatrics or wild garments to attain it, which was refreshing and a nice change of pace for her! 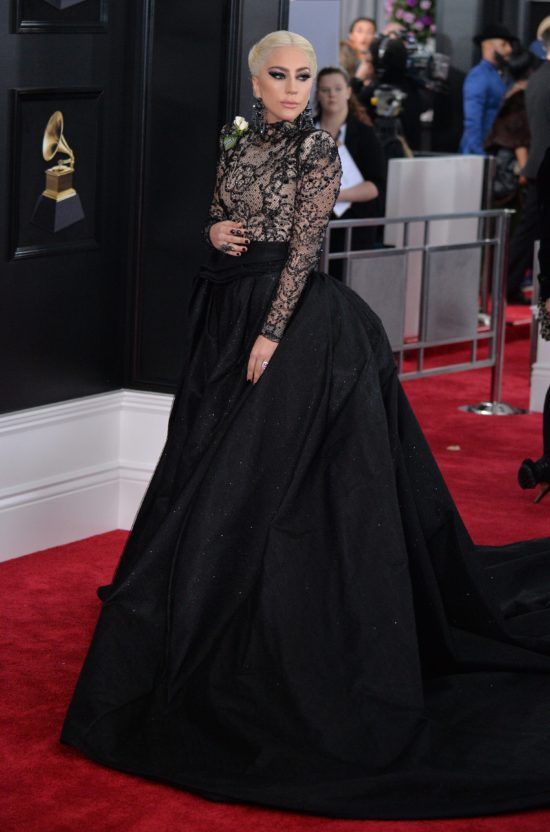 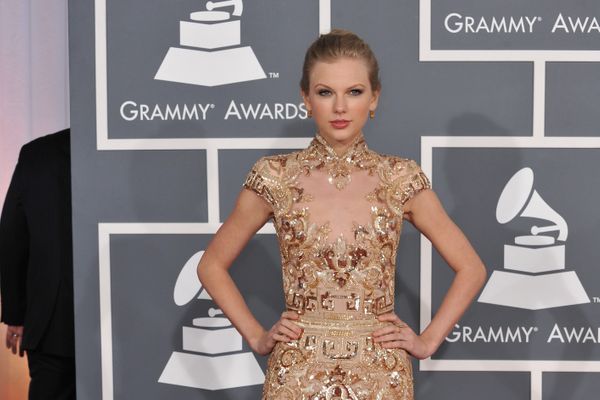