The Grammy awards are undeniably one of the most anticipated entertainment events of the year! Although many fans are thrilled to see their favourite musicians nominated for awards and reaping the rewards, many are just as excited to see the outfits they wear while strutting the red carpet. The Grammy awards red carpet is definitely known for fashion risks, and this year was no different, but unfortunately not always for the best! Follow along as we recall 12 of the worst dressed stars from last night’s 2018 Grammy awards:

Radio show host Jenny McCarthy shocked everyone last night on the Grammys red carpet with her new teal blue hair! Although we’re not completely opposed to the eccentric hair color, we wish that she would have allowed the fresh ‘do to steal the show rather than distracting with embellishment! McCarthy should have definitely skipped the tinted sunglasses, mesh gloves and sparkling textures and simply allowed the bold hairstyle to do all the talking with her red carpet look. 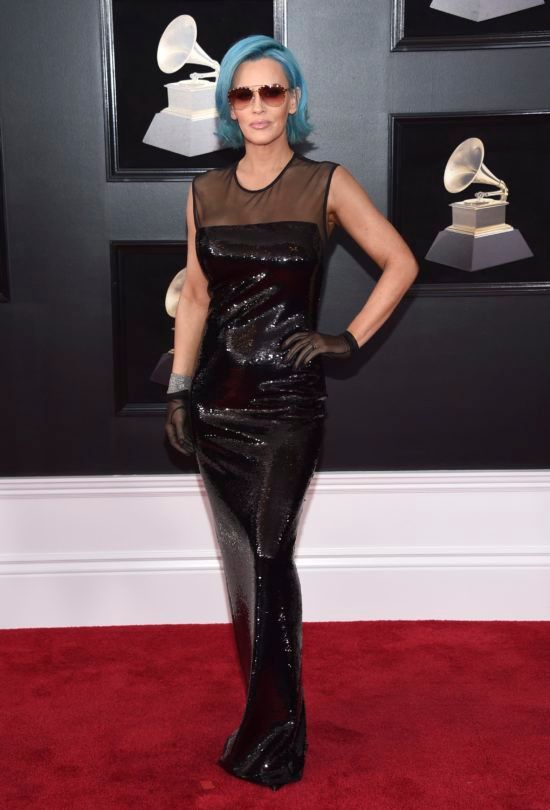 Kali Uchis definitely had one of the wildest looks on the red carpet last night! We can appreciate a red carpet risk or two when it comes to fashion, but this look was unfortunately quite the miss. Head to toe millennial pink was a huge trend this year, but this shiny, awkward texture just didn’t quite encapsulate the trend they way we would have hoped. We would have much-preferred something with a more minimalist pattern and figure flattering cut. 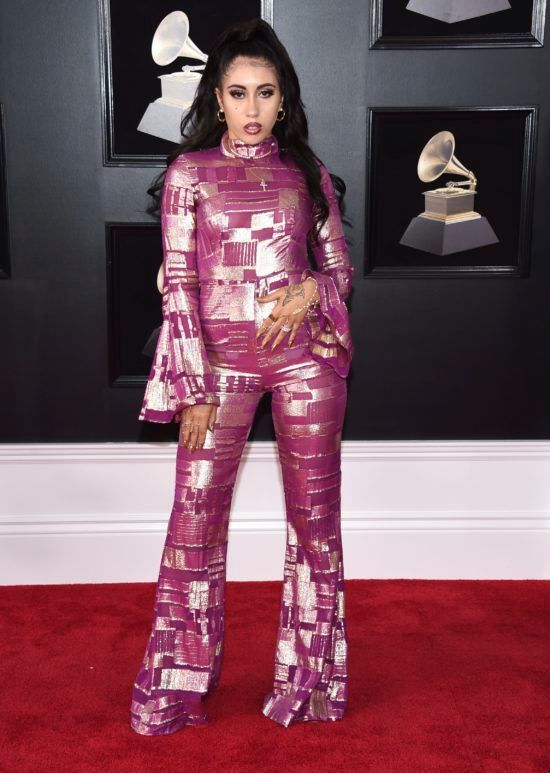 Coco Austin always tends to flaunt her curves on the red carpet, but this particular look seemed a little over the top. We love a strategically placed cutout, but this black look revealed a little too much to still be tasteful and classy, especially in combination with her thick choker necklace! The bizarre black dress was completely held together by metal pins and felt like a fashion disaster waiting to happen. 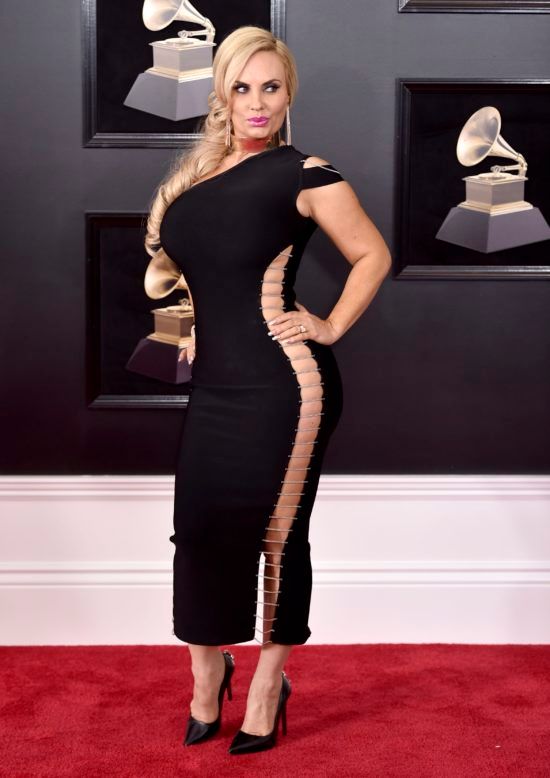 Kesha stole the show last night when she sang her powerful single “Praying” at the Grammys; however, her red carpet look from earlier in the evening definitely left us quite disappointed! Kesha is known for eccentric, out-of-the-box style, but with her new shift in music, we had hoped her style would shift as well. Unfortunately, she stepped out wearing an unflattering navy suit that seemed to sit on her body in the wrong places and didn’t pair well with her choice of glittering, cowboy-inspired booties. 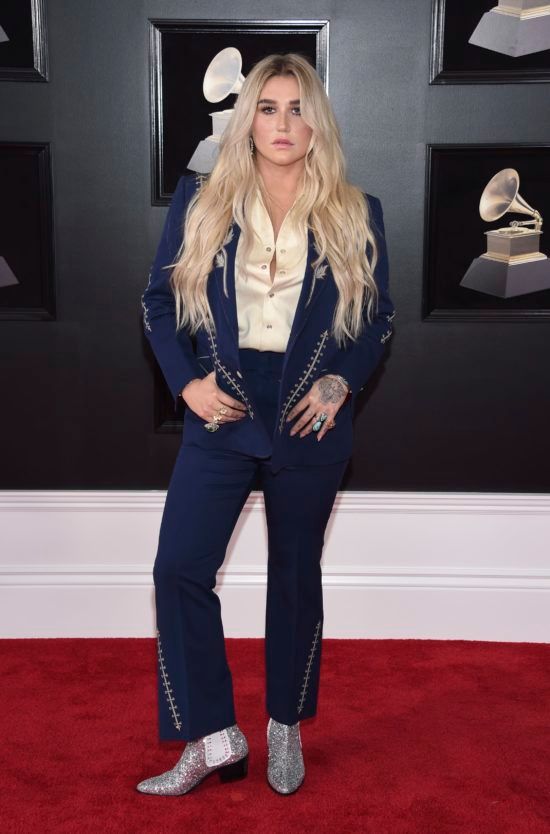 “Girls Just Wanna Have Fun” singer Cyndi Lauper hit the red carpet in a colorful suit last night that undeniably caught some attention. Unfortunately, it may not have been for the right reasons considering the busy print and clashing colors! As if the suit itself wasn’t already quite bold, Lauper took her look a step further and dyed her hair in pastel shades that picked up on the colors of the suit. 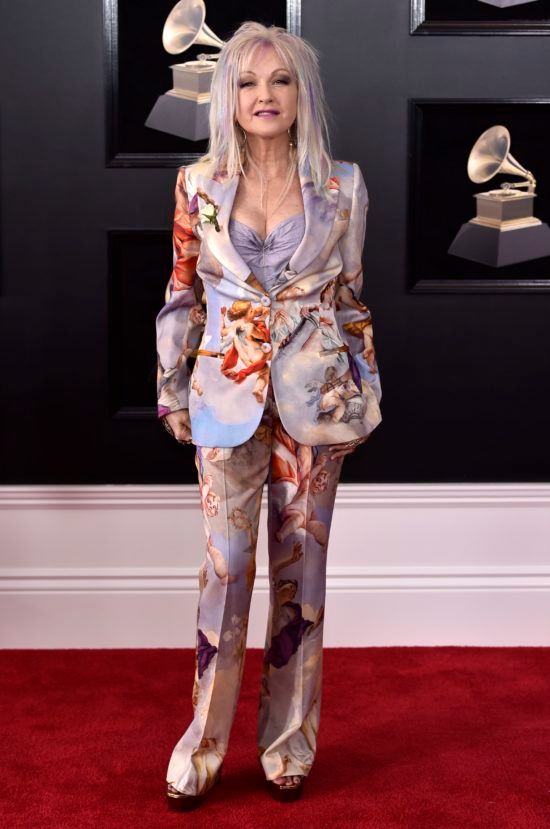 Tailored suits seemed to be the leading trend at the Grammys red carpet last night, but there is definitely a fine line between tasteful and tacky when it comes to this look! Ava Max, unfortunately, landed on the latter half of this scale with her yellow and magenta printed suit combo. The color combination was quite unexpected and seemed to especially clash with the red carpet backdrop. Her nude tank top layer seemed a little too casual and added yet another color that didn’t quite fit into the mix. 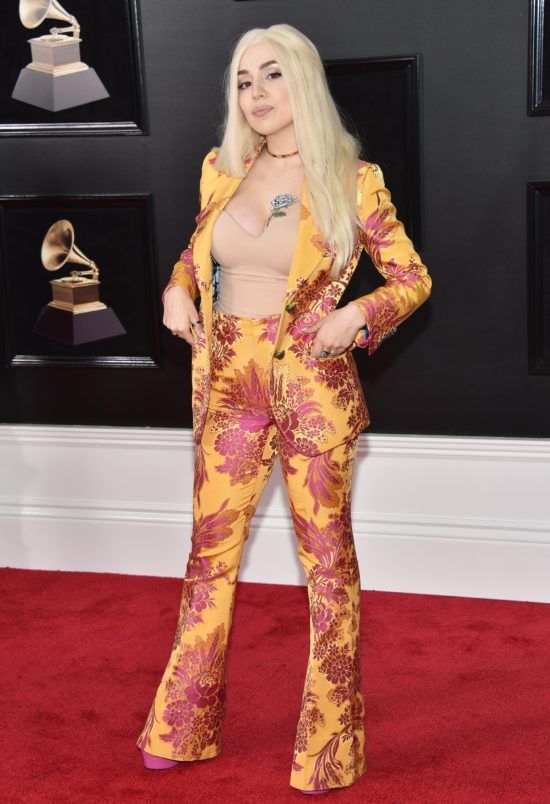 Lana Del Rey opted for a whimsical, sparkling gown on last night’s Grammy red carpet. Although this look wasn’t overly awful, the color simply wasn’t the most strategic choice for the fair-skinned, brunette beauty. The shade of nude seemed to wash her out and didn’t bring life to her complexion. To make matters worse, the star rocked a headband filled with floating stars that was definitely quite questionable. 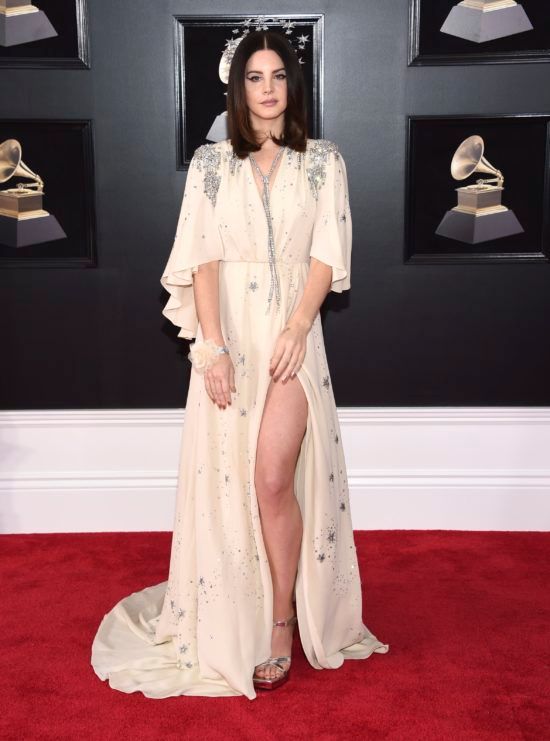 Feathers are a red carpet staple, but all in good taste! Karen Fairchild took the trend a little too far at last night’s Grammy Awards. The pale pink garment was covered in head to toe feathers which gave her unnecessary volume in all the wrong places. We would have much preferred to see feather detailing along the arms or skirt rather than a full-blown feathered frock! 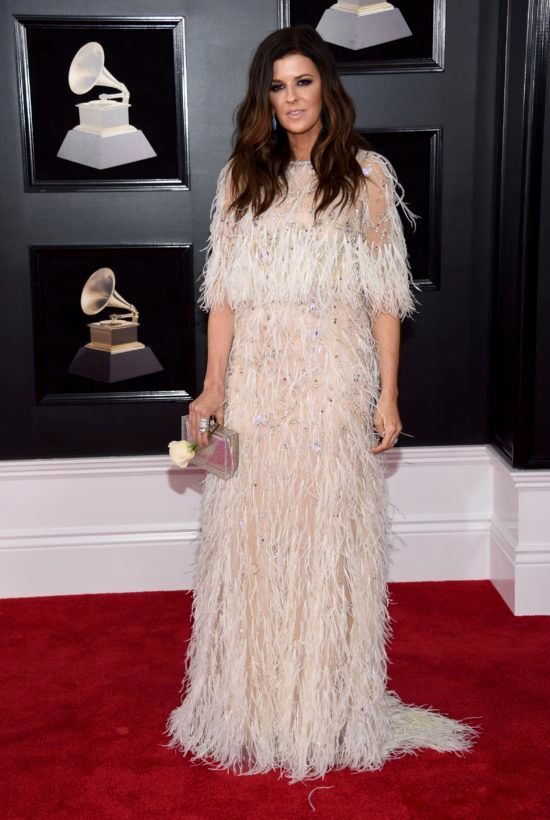 We’re all for a tailored power suit, but Janelle Monae’s look from last night’s Grammys simply was not flattering. The embellished floral design seemed stark against the jet-black suit and the proportions just didn’t quite work. Her blazer was tight and form-fitting, yet her pants were loose and baggy. She also buttoned up her shirt to the top which made the entire look appear stifling and uncomfortable. 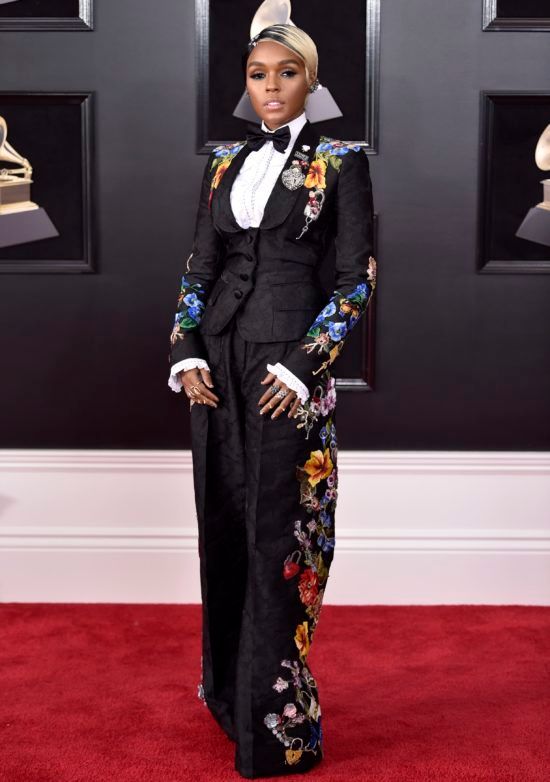 Cardi B is undoubtedly one of the most eccentric Hollywood personalities at the moment, which is why we expected a wild look on the Grammys red carpet last night! The pure white garment she selected was covered in frills and featured dramatic, exaggerated sleeves as well as a foofy tiered skirt. This look was definitely visually interesting and surprisingly classy in a way, but it simply seemed to overwhelm and drown her petite frame! 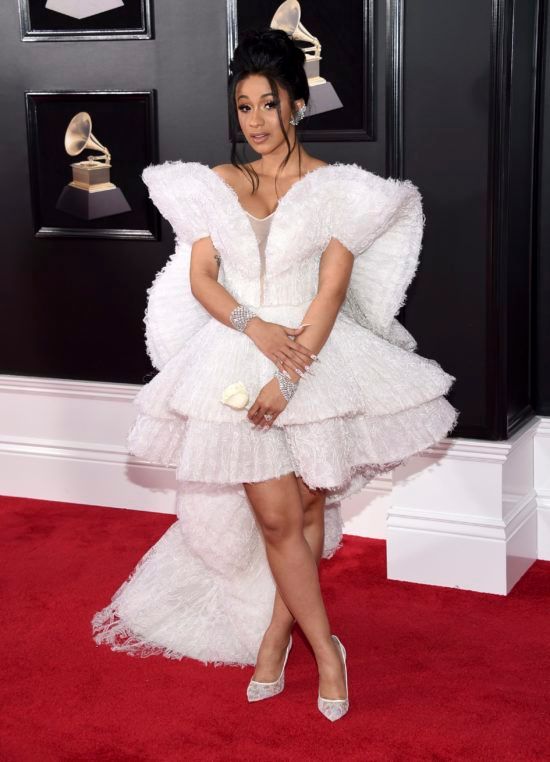 Pink has quite a unique style and her looks vary from outfits that are overly foofy and feminine to looks that are tailored and sharp. Her Grammys look from last night, however, was quite the sight on the red carpet! Her dress consisted of magenta, royal purple, and cobalt feathers all the way throughout and a chunky black belt wrapped around her waist. Again, the feathers simply seemed too much and we would have much preferred tasteful detailing in certain areas of the dress rather than an entirely feathered garment. 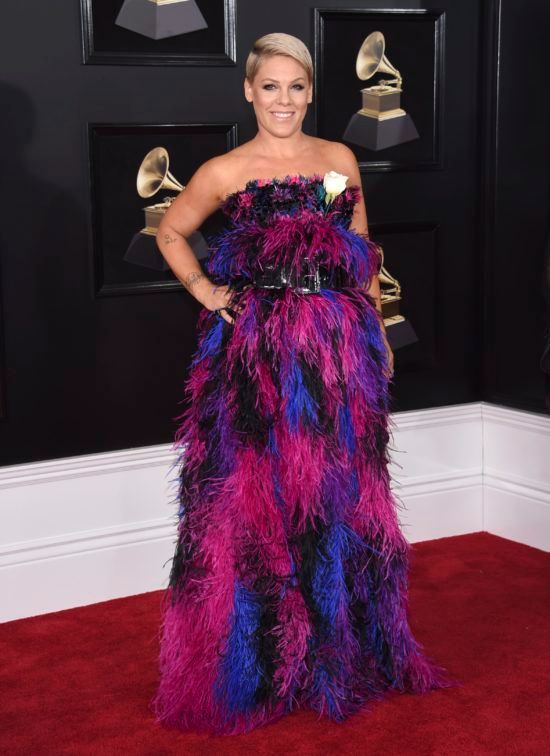 Alessia Cara is an absolute sweetheart, but this Canadian native unfortunately needs some assistance in the fashion department! Her red carpet looks are notorious for being overly casual and she has made a habit of rocking t-shirts and sneakers as her awards show go-to. Although she didn’t land herself on the best-dressed list, she did go home with a Grammy award in hand, so that’s quite the accomplishment in our books! 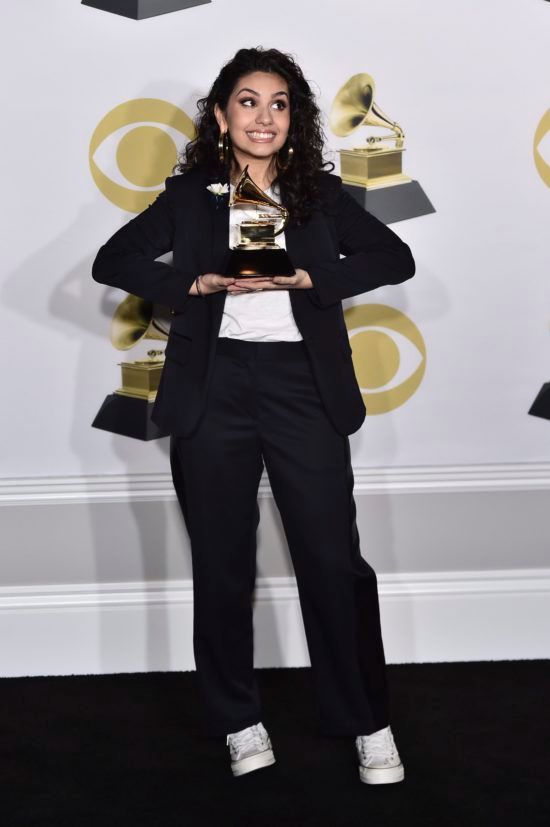 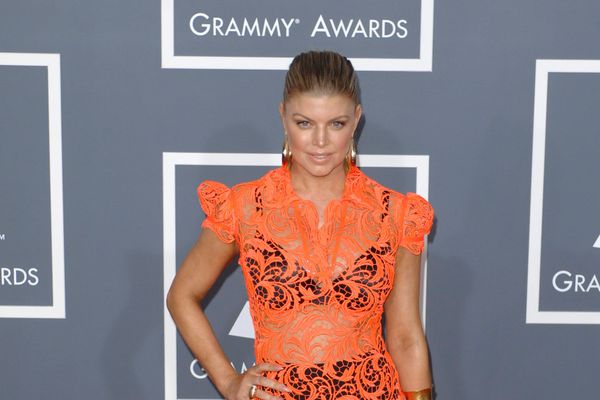