Over the years, we’ve seen a lot of bad fashion at the Grammy Awards. Some stars take the event really seriously and dress to kill; however, there are other celebrities who take the ceremony as an excuse to dress in the most bizarre of fashions. We’re still scratching our heads over what some of them have worn. The most perplexing thing about a lot of these stars who have ended up on worst dressed lists is that they don’t always commit fashion suicide at this event – there are other years where they actually ended up on best dressed lists. Here are 7 celebrities who totally failed at past Grammy Awards!

Lady Gaga dressed herself up like she was a piece of performance art at the 52nd Annual Grammy Awards. She wore this celestial Armani Prive lilac gown with jewel encrusted platform heels. She looked like a little solar system – all that was missing were little planets floating around her. We’re surprised that she could keep such a straight face when she was dressed like this. She must really take herself seriously. We, on the other hand, don’t.

While we might find the dress and all of its accessories to be a little too out there for our tastes, she was really proud to be wearing it. “I am honored to be wearing Armani this evening,” she said in a statement. “The series of pieces Mr. Armani created for me are truly iconic; they represent not only beautiful fashion, but my spirit and essence as an artist. Mr. Armani is a fashion legend, and tonight would not have been the same without his touch, and his wonderful team.”

This isn’t the worst dress on our list, but it isn’t good by any stretch. We have come to expect a lot from Beyonce. Ten years ago, this definitely wasn’t the case. While we think that this Stephanie Rolland Fall 2009 gown, which featured Aztec-like designs, had some potential, it just doesn’t work on her. The patterns aren’t flattering and the zipper cheapens the whole look. The earrings that she is wearing also don’t go with the ensemble. We think that she might actually be too curvy for this kind of dress. It just doesn’t highlight her hourglass figure and instead makes her look kind of boxy.

Beyonce’s dress is such a disappointment. In recent years, she almost always gets it right at the Grammy Awards. She does sexy and fun and flirty like no one else on the red carpet. Let’s hope that this year she picks out something nice.

Nicki Minaj looked a little too much like Little Red Riding Hood at the 54th Annual Grammy Awards in this scarlet satin Atelier Versace robe, which came with a hood and the label’s signature Medusa head emblazoned on the skirt. Her date that night was dressed up as the pope and was actually quite close in age to him as well. We can’t figure out if she was trying to make some sort of political statement with this getup or if she just wanted loads of attention. If the latter is what she wanted, she certainly got it. We’re still talking about it!

We are trying to figure out who is more outrageous on the red carpet – Minaj or Lady Gaga. They both dress like they are trying to make a statement – unfortunately for them, the message (or whatever it is) always gets really muddled underneath a lot of really bad fashion choices.

Jennifer Lopez has never been scared about showing too much skin – just look at the dress that she wore to the 42nd Annual Grammy Awards. This sheer green Versace gown didn’t leave much the imagination and it looked rather flimsy, as though a gust of wind could have blown it apart. We know that the dress has become one of the most iconic dresses in Hollywood history; however, that doesn’t mean that it is attractive. It was made for celebrities like JLo who have no problem exposing a lot of skin.

Since wearing that infamous dress to the Grammy Awards, Lopez was only nominated for one other Grammy and that was in 2001. She’s still making music though and winning other awards. Maybe the Grammys just aren’t a fan of JLo. At the 55th Annual Grammy Awards, all celebrities were told to dress conservatively. In spite of this, JLo showed up wearing a black dress that exposed her entire right leg.

Anne Vyaltitsyna showed way too much leg at the 54th Annual Grammy Awards. She donned this Anthony Vaccarello dress, which looked like someone had taken scissors to it in a fit of frustration. We’ve seen this Russian-American model wear a variety of ensembles both on and off the runway; however, this is the only thing that we have seen her in that doesn’t flatter her physique. This isn’t her entirely her fault though – we mostly blame the dress.

Anne should be more famous for her modeling career; however, she really rose to fame thanks to her on-again, off-again relationship with the notorious womanizer Adam Levine. He has a thing for models, so naturally he fell for Anne. They dated for about a year. After they broke up, he went for another model, Nina Agdal. When they broke up, he surprised everyone by proposing to Behati Prinsloo, a Victoria’s Secret model. Anne wasn’t sad about any of it though – she says she’s happy for her ex.

Rihanna left little to the imagination at the 52nd Annual Grammy Awards. She donned this white, frilly Jean Paul Gaultier Couture gown that showed a little too much skin. According to her, she plucked it right off the runway; however, we think she probably should have left it there. We know that she likes to take risks, but this one is not the right type of risk to be taking. The only thing that really looks good on her in this photo is her hairstyle. The dress is more of a liability.

It’s really too bad because the “Umbrella” singer can often rock the red carpet at the Grammy Awards. We blame her stylist Mel Ottenberg for this disaster. He is the one who is supposed to know more about fashion and prevent her landing on any worst dressed list. He just didn’t do his job if he let her leave the house wearing this frilly, barely there mess.

Fergie blinded everyone with this orange Jean Paul Gaultier Couture Spring 2012 gown that she wore to the 54th Annual Grammy Awards. The color wasn’t the only thing that was bad about this dress – it was also sheer and made of lace. Making matters even worse, she wore a black bra and black granny panties underneath. It was definitely a bold move; however, we think it was ill advised. This kind of dress is always a bad idea and so is the color.

When it comes to fashion, you really never know with Fergie. She might show up to an event looking sexy and classy, or she will sometimes take a step further and wear something that looks kind of trashy. This Jean Paul Gaultier is an example of the latter. We don’t think that this is what she was trying for though. She probably wanted to look sexy; however, this kind of dress doesn’t get her there. 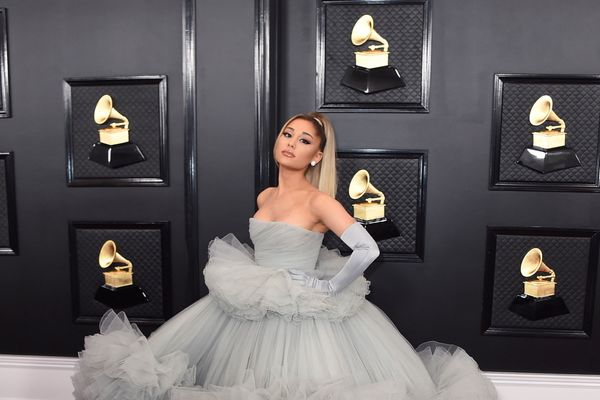