When comes to Grammy fashion, it is either totally ridiculous or absolutely stunning; however, many celebrities fall into the former category. This list is looking at last night’s best dressed, and as per usual, very few celebrities actually made the cut so, without further ado, here are the 2017 Grammy Award’s best dressed:

Kristin Cavallari kept it simple with this with black Olima gown, which featured a plunging neckline and a thigh high slit with sheer paneling. She accessorized with a dainty little necklace and a pair of black strappy heels. The dress was a little revealing, but it really accentuated here killer figure.

Country singer Cassadee Pope wore this silver sequined Julia Clancey gown, featuring a plunging neckline and a train, and she accessorized with a Kate Spade clutch. Although she was a bit nervous wearing it, the metallic dress really highlighted Pope’s amazing figure.

Faith Hill rocked this bold red Zuhair Murad gown at the Grammy Awards. The gown had a number of gorgeous features like the high neck, a diamond cut out in the chest, long sleeves, and a high slit in the front. Some viewers thought that Hill’s dress was a little too similar to Carrie Underwood’s, but we think it’s fair to say that their dresses were both beautiful, but for different reasons.

After performing, Beyonce put on this shimmering, red-sequined, cleavage-bearing dress, which really showed off her growing baby bump. She completed the look with a sparkly diamond jewel-drop necklace. It was a really big night for Queen Bey – she ended up winning two of the nine Grammy Awards that she was up for!

Chrissy Teigen looked stunning in this lacy black number. The dress featured a number of textures and styles, from black see-through lace to black crochet detailing. It also had an interesting neckline, which looked like it was made out of string to give the appearance of a choker, and had a fringe on the hem and tail of the dress. Overall, it was a really good look!

Country singer Kelsea Ballerini walked her first Grammy red carpet last night and, unlike some stars, she certainly got it right in terms of her style! She donned this nude Ines Di Santo gown, which featured an aqua floral motif. According to her, when she saw the dress, she knew it was the one. “It’s feminine and kind of girly, but the bodysuit makes it edgy,” Ballerini told Billboard. “We like to keep growing up my fashion as I grow up, so this is a bit sexier since the fabric is sheer and you see the corset-y bodysuit underneath.”

Carrie Underwood radiated in red at the Grammy Awards. She wore this long-sleeved Elie Madi gown, which featured a high neckline, a keyhole opening on the bodice and sequins. She completed the look with red Jimmy Choo ‘Max’ sandals and gold hoop Nigaam earrings. Underwood’s look was easily one of the best – if not the best – of the evening. 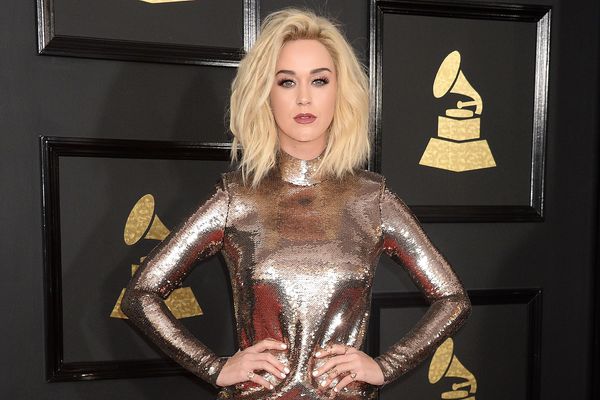